Should I play a B♭ or a B♭♭ [duplicate]

Ask Question
Asked 6 months ago
Active 6 months ago
Viewed 98 times
1
This question already has answers here:
Are accidentals in the key signature and measure additive? (5 answers)
Closed 7 months ago.

There's a passage I encountered in a piece I was practicing, the key signature was E♭ Major, which contains 3 flats: E♭, B♭, and A♭. 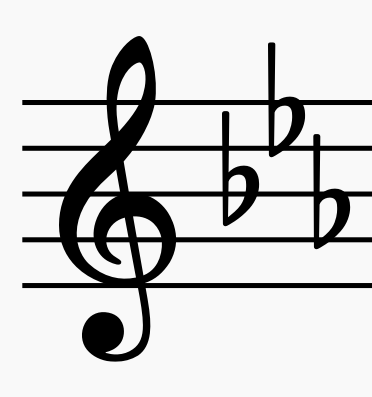 In that passage, there is a B♭. So should it be a normal B♭ or a B♭♭

Any hints would be appreciated. :)

Is there a B♮ in the previous measure? I'd guess there is, and the flat is just a courtesy to remind you of the return to normal key signature.

By definition, courtesy accidentals are not mandated by notation rules and the score is unambiguous without them (they're there because somebody thought it would make it easier to read). Sometimes they're printed inside () brackets to avoid just this kind of head-scratching—good practice IMO.

Bb. For Bbb there would need to be an actual double flat symbol https://en.wikipedia.org/wiki/File:Doubleflat.svg

It's impossible to tell for sure as the example doesn't contain preceding music, but it's probably either a courtesy accidental, or there was some other accidental (perhaps B natural) earlier in that measure.

There is another 'B' in another octave later in the bar. With no 'accidental'. That says to me that the one on the middle line was probably B♮ in the previous bar (the other wasn't there at all).

So, it's probably a courtesy accidental, there to remind the reader that the barline has actually done its job of cancelling the prior natural on B. It really ought to have brackets round - (♭) which then makes it very obvious.

It certainly would not be B♭♭, as the accidental before any note makes it clear what that note should be. If the composer or printer wanted B♭♭ it would have been written exactly as that.

14
Are accidentals in the key signature and measure additive?

22
Collective word for sharps and flats in the key signature
5
Temporarily Changing Keys - Which accidentals to use?
23
Should one write ♯ or ♭?
5
Is it possible that a music piece written in a "flat key signature" contains sharp-accidentals (and vice versa)?
3
The role of accidentals in this piece of music
5
How to easily transpose sheet music?
15
Why are accidentals not additive?
8
How to play this double sharp note