Is this cadence an example of the German theory that the mediant chord can have tonic function?

From what I understand of German theory the mediant iii chord can have tonic function as the "tonic counter-relative."

In this Bach chorale...

...the second cadence is on iii. The preceding chord is a leading tone chord so it's kind of a deceptive cadence, but instead of going to vi - which I think German theory would call the "tonic parallel" - it goes to the counter-relative.

Just to complete the idea, if the tonic parallel and tonic counter-relative are substitutes for a normal tonic, then the movement revised as a move to plain tonic would be something like... 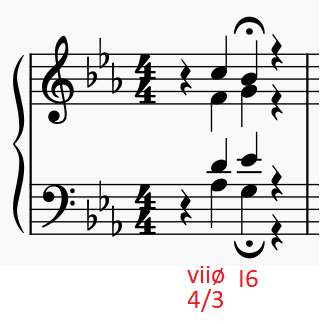 Is this a correct application of German theory?

Well, I suppose this could be characterized as a rare and quite unusual application of the German notion of a Gegenklang. Though first it should be noted that this comes out of German functional theory of the late 1800s (from Riemann), not something J.S. Bach would have had an inkling of.

Just to be clear about the German theory -- let's consider C major, just to be simple. As Michael notes in the question, a submediant (vi) chord in Riemannian terms would be a "tonic parallel" chord. At a deceptive cadence in C major, where we'd see G major to A minor (V-vi), we can therefore think of the A minor chord as having some notion of "tonic" functionality.

The Gegenklang concept, on the other hand, comes from Riemann's notion of Leittonwechselklänge, or "leading tone exchange" chords. In C major, one "exchanges" the leading tone B in place of C, while retaining the other notes of the C major triad (E and G), thus arriving at E-G-B, or E minor (iii). Yes, in Riemannian theory, E minor thus can sometimes have "tonic" function, though it's much more frequently labeled as a "dominant parallel" (Dp), that is, in the parallel minor relationship to G major. (Just as C major and A minor have a "parallel" relationship, so do G major and E minor.)

To be clear, it's pretty rare to label an E minor chord in C major as a Tcp using that "leading tone exchange" idea, rather than the much more common Dp. (For example, we very frequently see cadences in the 19th century with an apparent "iii6" harmony preceding I at a cadence. It's not really a "iii" chord in any functional sense there; rather, Anglo-American theory would say that the sixth above the bass is substituting for the fifth of the chord, and it's "really" a dominant or V sort of chord variant.)

Where does the Leittonwechselklänge concept come up? In minor key deceptive cadences. Forgive me if those reading already know this, but Riemannian theory does interesting things with the minor key and minor chords. Riemann was a major proponent of the notion of a dualist concept of harmony, where everything was symmetrical in major and minor. One formed major chords from the overtone series, and one created minor chords by going downward using a (hypothetical) "undertone" series.

Thus, the "root" of a minor triad is what we'd call the "fifth" in Anglo-American theory. A G-E♭-C triad thus has root G. Performing a Leittonwechsel (leading tone exchange) thus moves the root G to its "leading tone" of A♭. (Note the common use of ♭6-5 melodically in minor as a kind of tendency tone -- this lead Riemann to label this as a "leading tone" in minor.)

Using the leading tone exchange in C minor thus creates a triad with notes A♭-C-E♭. Hence, to explain the deceptive cadence in minor (V-VI), we make use of the tCp notion, where A♭ major is a kind of tonic substitute.

This is the stereotypical use of the "tonic counter-relative" (or whatever English translation you want to use) from German theory, which is mostly a minor key phenomenon. Both the "parallel" and "leading tone exchange" notions are used in major and minor keys respectively to describe what in English-language theory would usually be described as "submediant" chords.

Okay, now that we've cleared up what the German theory usually refers to, we can go on to the Bach example. I suppose an argument could be made to use the Tcp symbol (also a T< in Riemann notation, where the < was often drawn across the letter) to describe this use of a iii chord here. However, I admit I'm not as fluent with the subtleties of how actual Germans would apply these symbols today to know whether this interpretation would be common. There are other ways of interpreting the function of this chord, which could also be viewed as having a sort of "dominant" (i.e., Dp) function that "resolves" to the next (I) chord. (That is, the harmony of the measure would be S-Sp-Dp-T, i.e., A♭-Fmin-Gmin-E♭ following a standard S-D-T functional scheme. My guess is that's how German theory would probably look at it.)

But I think Michael's idea of interpreting the progression as a sort of leading tone chord resolving to iii is certainly possible.

I don't think Bach would have thought of the cadence in that fashion (if that matters). Rather, I'm pretty sure he'd see it as a variant of an old-fashioned Phrygian cadence. In modern theory we typically see Phrygian cadences resolve to a local dominant chord, typically a iv6-V progression. Here, we have the descending semitone in the bass, and the D in the tenor could be also interpreted as an accented passing tone, thereby instead making the harmony a F minor chord in first inversion resolving to G minor on the next beat. (Note the anticipation in the alto that also emphasizes the F, and the arrival on an Fmin7 harmony on the off-beat preceding. The harmony in this bar is gradually morphing from a IV harmony on A♭ to an F minor harmony.) Without the B♮ it doesn't sound like what we'd think of as a stereotypical Phrygian cadence today, but this sort of motion certainly has its roots in the older Phrygian cadences used in modal music (where chorale tunes sometimes came from). Note the outward motion of the bass and alto to the octave, also a common hallmark of old Phrygian cadences.

Why did Bach use this rather rare and very old-fashioned cadence type here? I don't know, but there are two elements I'd point to:

Anyhow, this is all a very long answer that perhaps veered quite a bit away from the original question, but hopefully it sheds some light on how this particular moment was likely viewed by Bach harmonically and how more modern German theory might interpret it. Yes, it's possible that one could label this particularly mediant chord with a "tonic" function (and if there was a good case in major key for Leittonwechselklänge, this is one of them), though I'm not certain that'd be the most common interpretation using German theory.

Not the answer you're looking for? Browse other questions tagged functional-harmony or ask your own question.

4
Were Plagal Cadences always used with an Authentic Cadence preceding it?

4
Why is the G major to Bb major resolution so strong?
6
Diminished chord constructed over the tonic degree?
7
How does a minor major seventh chord have tonic function when it's so unstable?
6
Neo-Riemannian Theory, The Minor Plagal Cadence, and Chromatic Voice Leading
2
How do the alternating C and Db function in this modulation?
5
What is the function of the non diatonic chords in this intro?
1
What determines the function of a chord?
3
What is the functional role of the subtonic chord?
5
Can I use the chord progression i - v - VII - iv? (Am - Em - G - Dm : in A minor scale)
4
Missing I (1st) chord in the progression: an example