Why are the frequency ratios of notes in the Pythagorean scales 9/8 and 256/243? 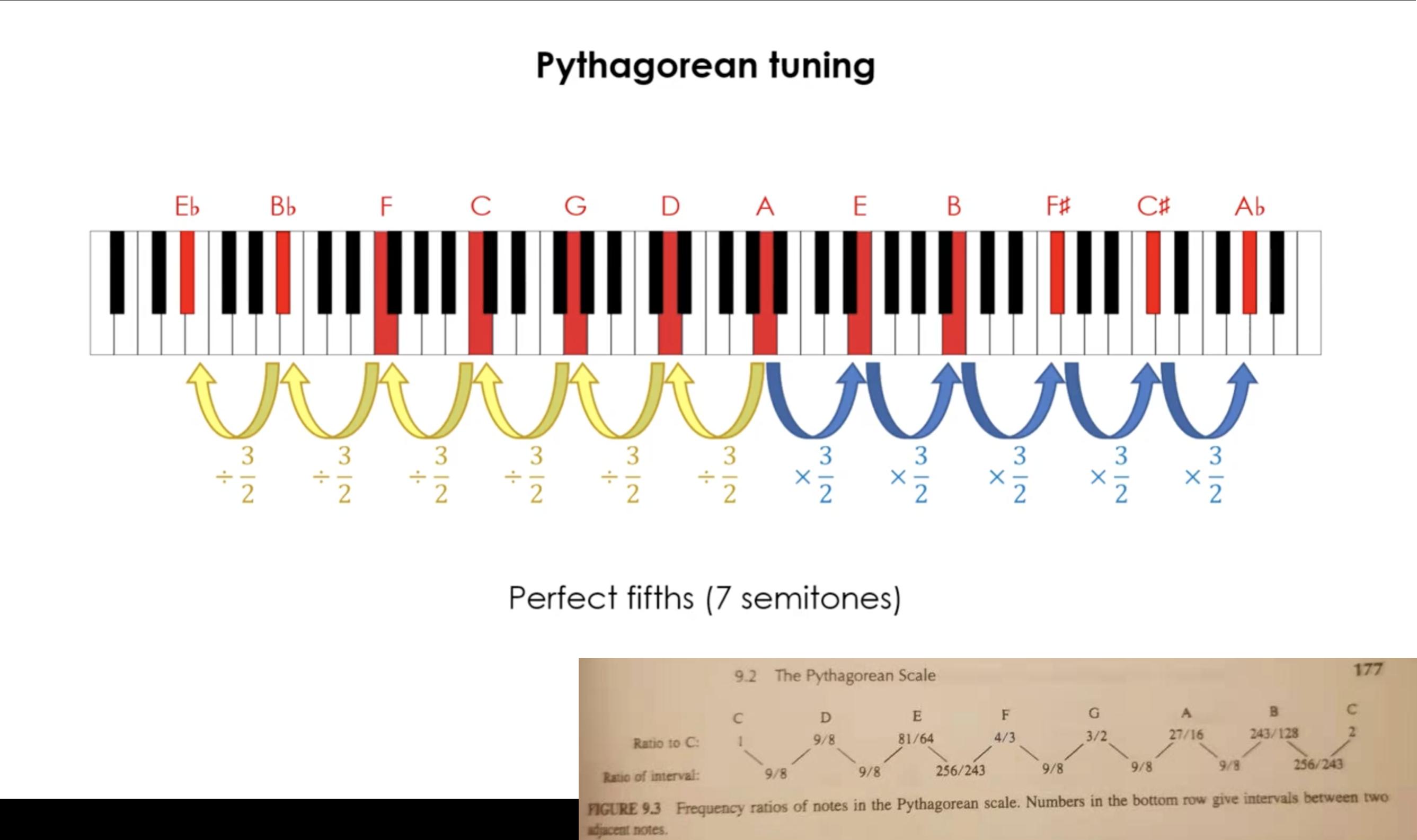 That is true if all the semitones are the same size, but they can't be if you want to use pure fifths and also close the circle of fifths on a standard 12-tone keyboard.1

If you use your approach of dividing the fifth from C to G into seven equal semitones, then the fifth between G and D doesn't have a ratio of 3:2 but of 1.497. That is a hair smaller (about 3.35 cents) than a Pythagorean fifth.

Footnote 1: you can have all the semitones equal if you divide the octave into 12 equal parts, of course, which is twelve-tone equal temperament, but then the fifths are a tiny bit smaller than 3:2.

There are a couple different issues here. As phoog notes, the Pythagoreans loved rational numbers. To them, "irrational numbers" (like various roots of 2 or 3/2) were, well... irrational.

Phoog also notes that you run into a problem when you add a bunch of perfect fifths together. If you use a 3:2 ratio and go through 12 perfect fifths, you theoretically need to add up to seven 2:1 octave ratios for the "circle of fifths" to close. But you don't. No power of 3:2 is going to give you a power of 2:1.

The question presumes that this 3:2 ratio is absolute rather than the 2:1 octave, but that still creates problems in tuning scales.

As to the reason why the Pythagorean scales typically have the particular ratios brought up in the question (9:8 and 256:243), well, it has to do with the ancient Greek method of deriving scales, which was based around perfect fourths, with a 4:3 ratio. The Greeks had many ways of dividing up a fourth into different notes. But one "diatonic" way was to use "whole tones," which were typically tuned to a 9:8 ratio. Why 9:8? Because 9:8 is the difference between a 3:2 perfect fifth and a 4:3 perfect fourth. (Divide 3/2 by 4/3 and you can see this.)

So, when dividing up the perfect fourth, one way of doing it is to use two 9:8 whole tones. But then the last interval you end up with is roughly a semitone. The actual ratio required to complete the 4:3 perfect fourth can be found by taking two whole tones away. So, 4/3 divided by 9/8 divided by 9/8 leaves 256/243. That's where the other ratio comes from.

The question assumes all semitones are of equal size. This was not an assumption in ancient Greece, though it is an assumption in modern equal temperament. Instead, the Greeks would start by tuning the important intervals like a 2:1 octave, 3:2 fifth, and 4:3 fourth. Then they'd fill in the "gaps" as discussed above.

To find the (irrational) ratios for a modern 12-tone equal tempered scale, you'd need to divide the octave (2:1) ratio in 12 parts, hence 21/12:1. That will give you the correct equal tempered semitone ratio, though note that seven of those won't give you an exact 3:2 ratio either, for reasons stated in my first couple paragraphs.

This implies that no stack of fifths will equal any stack of octaves (replace octaves or fifths by thirds, sixths, etc.)

Pythagorean tuning works with stacks of fifths with ratio 3/2. Two fifths stacked give 9/8 (reducing intervals to between 1 and 2 by octave equivalence when appropriate) giving a major second (C-G and G-D giving C-D). Stacking 2 major seconds gives 81/64 for a Pythagorean major third; however, the "just" major third should be 5/4. The difference is audible and gets worse with other intervals. Even throwing in a 5/4 ratio to the "basic" ratios, doesn't help exactly. A guitar is tuned E-A-D-G-B-E (3 fourths, a third, and a fourth which should yield 2 octaves). The fourth is the complementary interval to the fifth with a ratio of 4/3 (the inverse of 3/2 reduced to be between 1 and 2). By ear (listening to beats) one can easily tune each fourth and the third, then the two Es are out of tune. Mathematically, 4/34/34/3* 5/4*4/3=320/81 but two octaves should 4/1 (or 320/80). (As an aside, one of my guitarists who had perfect pitch found this annoying when trying to tune.)

So compromises are made yielding the entire field of temperament. Equal temperament solves the problems of treating intervals equally but it may not yield as nice intervals.

Not the answer you're looking for? Browse other questions tagged scales tuning frequency or ask your own question.

6
In Pythagorean tuning, what's the frequency of the tonic of each key?
4
Why are there 18 notes listed for chromatic scale tuning
32
Why are C♯ and D♭ different frequencies?
28
Why is a 440 Hz frequency considered the "standard" pitch for musical instruments?
4
are 2 enharmonic notes really the same note?
11
Why is the relationship between frequency and pitch exponential?
4
Third resonant frequency when two notes are played
0
How to calculate the extra semitone in one circle of fifths
1
Help understanding frequency ratios and string length