In bar 4 of Messiaen's Prelude 7 Plainte Calm, the time signature changes to 3/4. However, the notes at the treble clef dont add up. 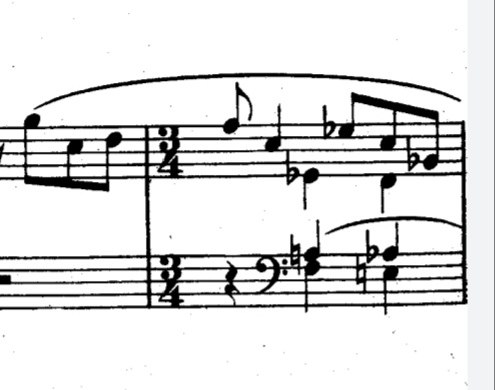 How one should count this?

Piano music often has multiple parts (or lines) written on each stave. For historical reasons (from choral music) these are usually known as voices. Although it is possible to have more than two voices per stave, there are usually not more than two. To differentiate between notes written in two voices on one stave, one voice has stems pointing upwards, the other has stems pointing downwards, regardless of how high or low the notes are.

In the short extract from Messiaen you posted, the right hand part (upper stave) has two voices. So the rhythms for these notes are read at the same time not necessarily in the order that they appear from left to right. However, this is slightly confusing in the extract you show, as really there should be a rest at the beginning of the bar in the right-hand lower voice; instead only the two crotchet notes are shown. Below is the extract you posted notated correctly: 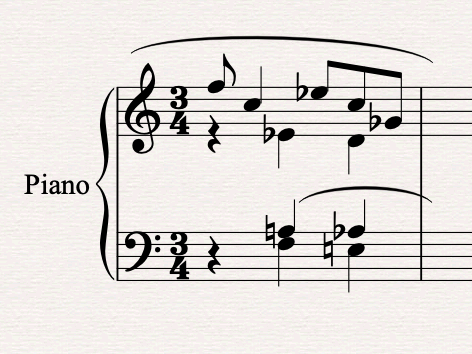 It's worth noting that the left-hand part also has two voices, but as their rhythms are not independent, the rhythm is much easier to work out!

Imagine the right-hand part were being played by two hands: RH = stems up; LH = stems down (and begins with a quarter rest).

Here's a re-written version that is more explicit in which notes come when and how to count it.

23
How is it that 12 eighth notes fit in a measure labeled as common time?
0
Writing in 6/8 time for piano
3
Tempo conservation with Time Signature Change, How to notate this for Classical Musicians?
1
Downbeat moves to beat 4 for a bass clef solo, should I insert a 3/4 bar or just keep it in 4/4?
11
How Do I Count Note Durations In These Bars?
3
BPM, beat durations vs frequency
7
Notation question: Adding half a beat to a bar?