I'm unsure how to handle a step-wise walking bass under a tritone substitution progression.

Not notating actual rhythms, just the changes and bass tones, I have...

Would those be the right (typical) step-wise tones?

Posting a revision after answers... 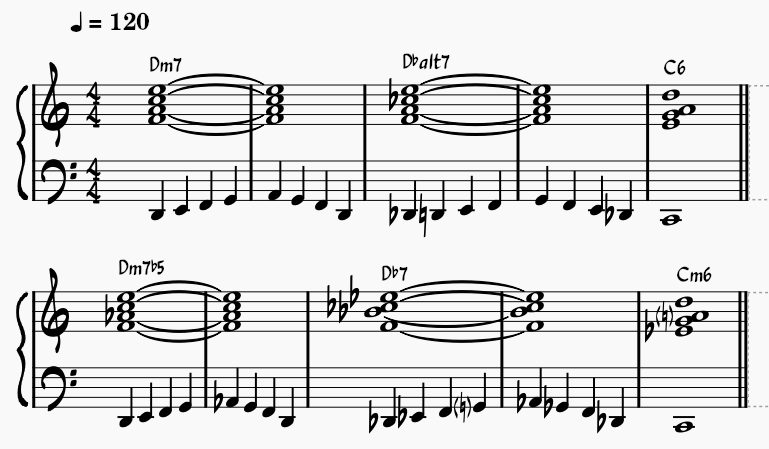 I’d first like to offer a few comments about walking bass in general:

Sometimes walking bass lines are written out note for note by arrangers but for the most part they are created by the bassist (or other instrumentalist playing a bass line) based on his knowledge of harmony, experience and also his personal preferences, what sounds good and right to him. I have sometimes heard other pro bassists’ use note choices that are not what I would have used. My point is that there are some universally used conventions like avoiding awkward intervals or repeated notes from beat 4 to beat 1 there are similar approaches to lines that are slightly different but that both work. Use and trust your ear and listen to bass players you admire for ideas and techniques.

My other point is that walking bass lines in general and also specific to this question of stepwise motion are very dependent on context. The tempo of the song, the speed of the harmonic motion and the interval from one chord root to the next all play a factor in creating good walking bass lines.

The rest of my answer will be based on your examples of 8 notes starting and ending on the original note.

What you have written here will work just fine. Actually the fact that they are tritone substitutions is not really relevant to the shapes of the lines. One choice I would make is on the last 4 notes of say the Db7 I would use Ab-Gb-F-Db because I like to hear the F chord tone on beat 3 (assuming quarter note notation) instead of beat 2 because that way the chord tone falls on a stronger beat. Also note the Gb instead of G which I also prefer despite the ascending #11 because the descending Gb leads to the 3rd better but the G works fine too.

Walking up and down to the 5th works well because of the number of notes from the root to the 5 but if you were descending to the 5th and back up an adjustment is required, an extra chromatic note must be added, either between the root and 7 or between the 6 and 5.

Altered chords and scales present a different challenge because of the dissonance, the lack of a P5 and also the fact that the scale from a jazz perspective has two 2nds (b9 and #9) and either no 4th or no 5th depending on your point of view (is it a #11 or b5?). With this scale and chord the best approach is to create a line that has a good shape and incorporates the root and 3rd effectively.

My last comment is regarding your choice of chord quality for the tritone subs. A Db7alt in a 2-5 to a major chord is sonically the same as a G13#11 except for the root. A Db13#11 would give you a more noticeable sonic contrast to the regular 2-5. The same applies to the minor 2-5 in reverse.

Yes, that's pretty much what I'd play for a stepwise walking bass line coming up from the root in each chord, essentially outlining altered and lydian-dominant scales respectively. It's not necessarily what I would play as a bass player doing a walking line as we tend to try and keep the whole bassline stepwise and not reset on a new chord but yes, coming up from the root that would work for me!