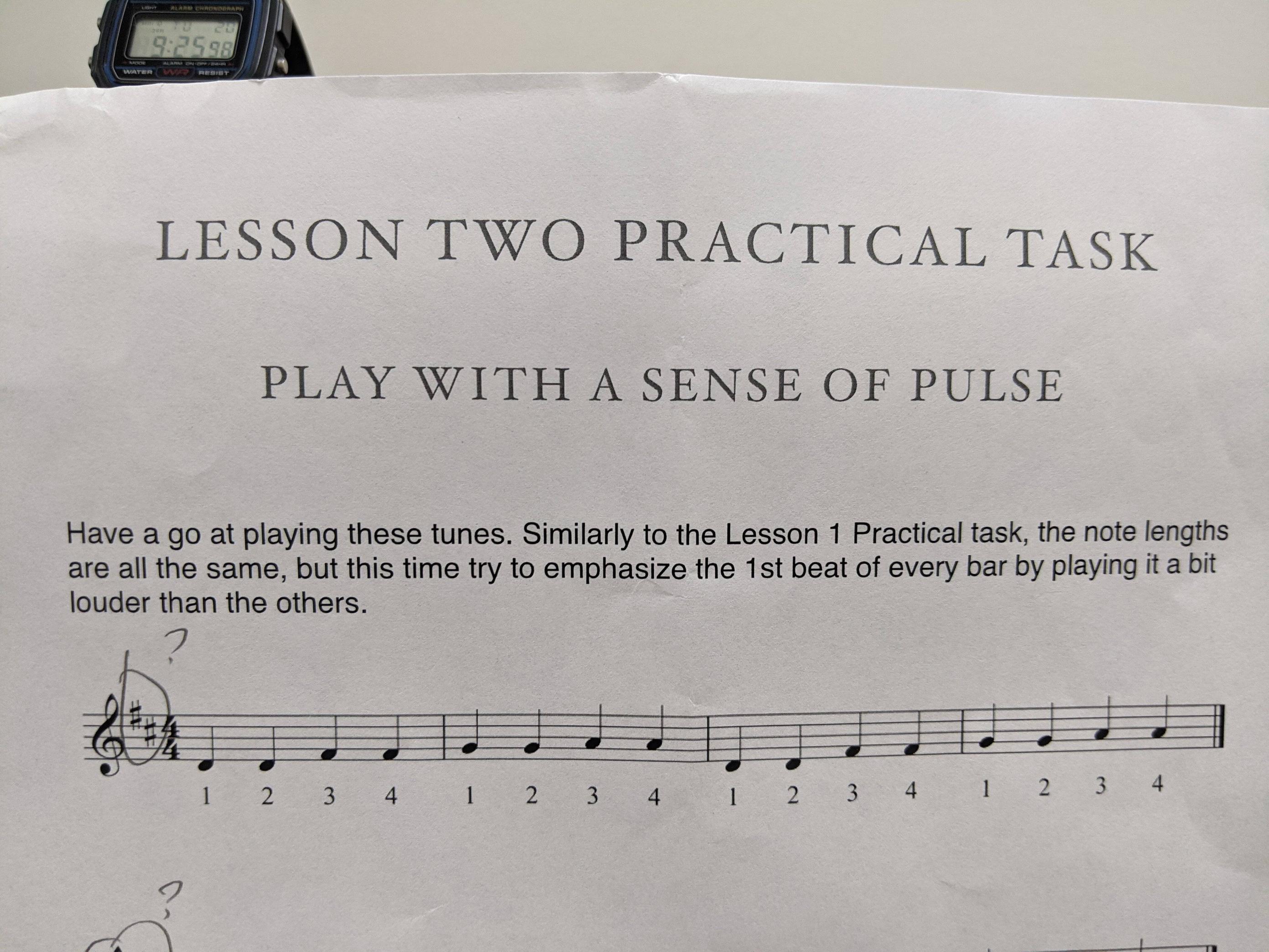 I'm learning piano on my own and I'm using a workbook (Ben Dunnett). Below is the link to my interpretation of what this task is asking (video on YouTube). I know I've played this in common time as I'm following my metronome (Stage Metronome for Android), but I'm having a hard time playing according to the instructions: emphasis the first beat of every bar by playing it a bit louder. What is throwing me off is the notes: it's two pairs of crotchets, each in the same key so I keep playing 2/2 instead. I know 2/2 is 4/4, but I'm having a hard time playing the "emphasis on the first beat of each bar". I've tried singing it and tapping to it and I'm still having a hard time figuring it out. What is this supposed to sound like?

The difficulty is comprehensible due to the way the notes are placed (and that's also probably part of the exercise).

I suggest you to start doing some exercises with a single note, with a strong accent only on the first of each group, trying to ensure that the accent only changes the volume of the note, not its duration, as in your video you're playing every first note much shorter than the second.
Do it for every finger, with 4 notes for finger, forward and back, then the same with 3 notes per finger (3/4), and then 2 (2/4).

Notes: the double bars with the points indicate a range of repetition: sections enclosed between ||: and :|| (sometimes the first ||: can be missing) are generally repeated twice; in this case, every group of 8 bars should be repeated at least twice, but being it an exercise, you can do them even more times if you feel so; the > symbols mark the accents, placed over or under the notes that should be "emphasized".

Then, again from the beginning, but with using accents less strong than before (but still audible).
Finally, the same exercises, but trying to play the accent only every two bars.

Then do what the exercise proposes, but by repeating every bar at least twice. As above, try with bigger emphasis on the accents first, then softer. In any case, always ensure that the duration of the notes doesn't change.

You can help yourself by also doing those accents by singing without playing, always ensuring that you properly do both the accents in the downbeat and that durations are consistent, then play while singing along.

Also try to keep your wrist a little bit lower (just a couple of centimeters).

Note that you're playing a wrong note: the third and fourth note of the first and third bar are "F sharp", so you need to play the black key immediately to the right of the white key you're playing in the video. This is referred to the two "#" (sharp) symbols that you circled in your book: those are "accidentals", are used to specify the key of the piece (in this case, D major) and are valid throughout the whole piece (unless specified). In your case, every F and C you would see in the piece should be played as sharp (the black key on the right of F and C).

This is how the result should be.

Note: from what I can see, you're still a bit confused about many aspects, and it's possible that the excercise is still a bit difficult for your knowledge and experience. Maybe you need to do some more practice and review your previous studying (including theory) in order to make you more aware of those aspects: they are very basic, but also fundamental for your musical education; the more those are clear (and the sooner), the better you'll learn in the future. Do not try to push your learning by hurrying too much.

Your problem is that you're 'picking' at the first of each repeated pair, playing it short. Keep your hand closer to the keys, PRESS the louder notes rather than striking them.

You might find it useful to practice this, concentrating in keeping each note the same length.

Most rhythms have the 1st beat of the bar emphasised. That's basically how the rhythm of the piece is established.

When that's good, play just 1, and wait until the next 1, when you play it again. Make it as loud as you like,then for now, play the same note 3 more times, counting 2-3-4.

It's clear that the exercise is a little advanced for now, so come up with simpler versions - like te one I explained. Little steps are normally going to get you there faster, so break down everything!

The insight that 2/2 and 4/4 have different accent patterns is important. The differences between similar-seeming time signatures is a much discussed topic on this site in its own right. For example,

as well as the questions Linked and Related to those.

When trying to create contrast in music, I like to begin by grossly exaggerating the contrast. It's easier for me to then pull back to a musical level, as opposed to starting too conservatively and then needing to "open up".

The techniques and exercises in the other answers are all good; take those to heart. A couple of my own suggestions:

Since 4/4 has its main accent on beat one and a secondary accent on beat 3, and keeping in mind the idea of exaggeration, I suggest an exercise like this:

In effect, you're dividing each 4/4 measure into two 2/4 measures, playing the first 2/4 measure forte (loud) and the second 2/4 measure piano (soft), with accents at the beginning of each 2/4 measure. Make sure there's a clearly audible difference between the forte and the piano parts. (Specifically, the forte accent should be noticeably louder than the piano accent.)

This provides a starting point for getting both the strong beat-one accent plus the less strong third-beat accent.

NOTE: the ">" is an accent sign, meaning to stress that note relative to the current overall dynamic (volume) level.

Toward a more realistic 4/4

Once the above exercise is comfortable, the next step is to move toward a less exaggerated execution. Something like this:

The distinction between this and the previous exercise is that rather than an abrupt shift between f and p, there will now be a more gradual quieting. The accent on beat 3 will still make it a bit louder within the context of getting quieter overall.

Keeping your wrist lower is good advice. Your hand shape is part of the reason it's so high. "Soften" your thumb so that the space between it and your pointer finger is less, and don't play on your fingertips; instead, play slightly toward the pads of your fingers. There's a halfway point between the finger pad and finger tip that is ideal. The effect to look for is that your hand will be slightly flatter, your wrist will be lower, and your entire arm will be more relaxed.

There are pictures on this site of what I consider good hand position:

Not the answer you're looking for? Browse other questions tagged piano sheet-music time-signatures beginner or ask your own question.

107
Is there any real-world difference between time signatures such as 4/4 and 8/8?
42
Is there a difference between 2/4 and 4/4
7
Why finger 4 on G-sharp, finger 5 on Fx=G in Moonlight Sonata mvmt. 3?
2
Sore left hand holding chords in awkward positions for long durations

4
At what speed should notes be played?
4
Odd Meter Transcription Practices
3
How is the tempo and time signatures related?
2
What is the difference between grouped and separated quarter notes
4
Piano beginner - Practicing duple time with metronome - 2 clicks or 4?
2
Kruger Andante - What am I missing on how to play this dotted half note?
4
Is it common to combine multiple voices in one piano staff, even if they don't fit the time signature?
8
What decides the grouping and emphasis for 6/4?
7
Notation question: Adding half a beat to a bar?