Help me figure out the mode of this Howard Shore piece

I have been trying to harmonically analyse this piece by Howard Shore called “Beyond the Forest”, an Elvish song from the Hobbit. I have included the sheet music below (page two is linked) and you can YouTube search it for a listen. It sounds very modal to me - very reminiscent of Greek Orthodox music -, and Howard Shore is known for having used modes for his LOTR/Hobbit soundtracks. Phrygian Dominant seems to be one of his favourites. But this does not seem to be it.

I have figured out that the third part (from bar 15) is in C Mixolydian, but am completely lost with the first section. The second bar of the first section does look like Bb Lydian but then it goes away and there is a pentatonic in bar 9. My initial intuition on listening was Locrian or some variation of it, but it keeps changing and doesn't seem to fit. I tried the technique of comparing the key signature used (in this case, C) to the "new signature" created by the mode but I am not even sure of what the root chord would be (I was between Bb and F). Of course it might not be intentionally modal at all, but it sounds like it and would be in character for Shore. The third section surely seems mixolydian! I have a feeling it is a mixture of different modes. Could someone point me in the right direction? 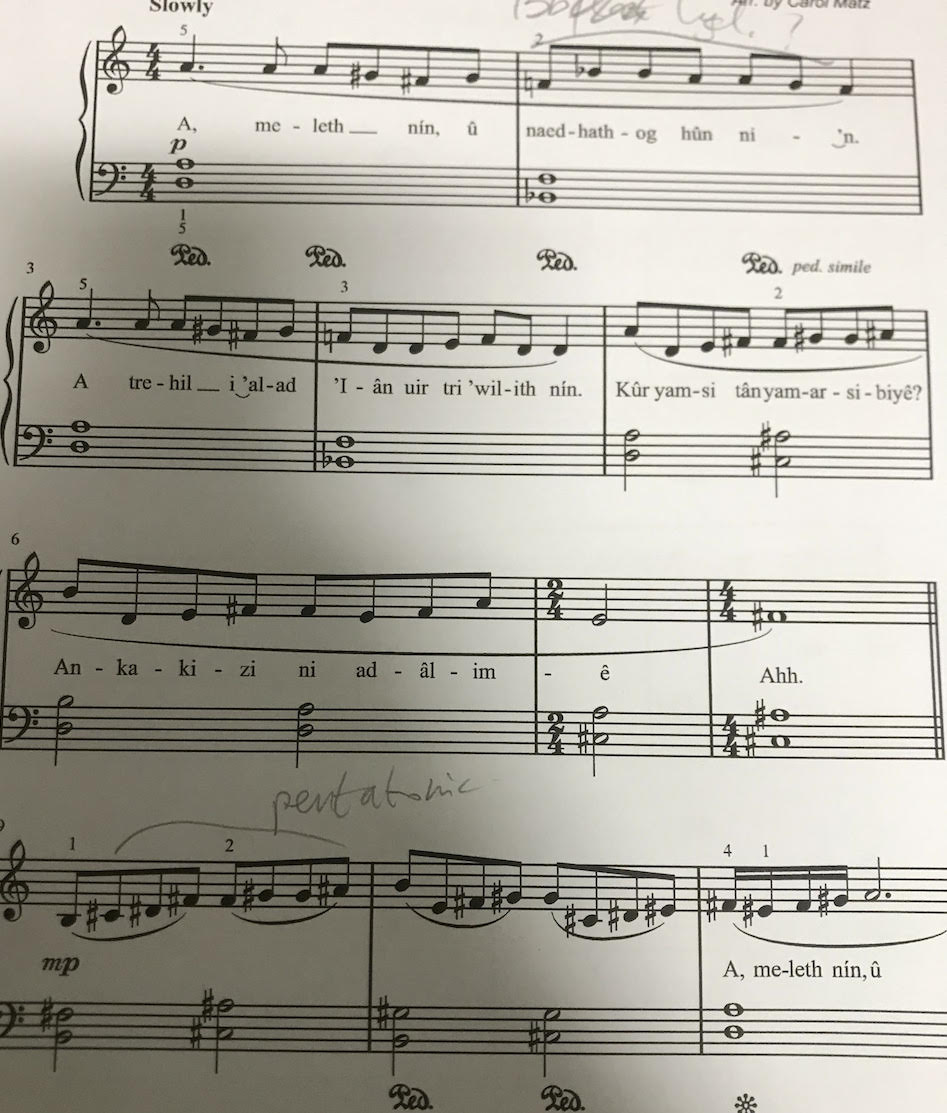 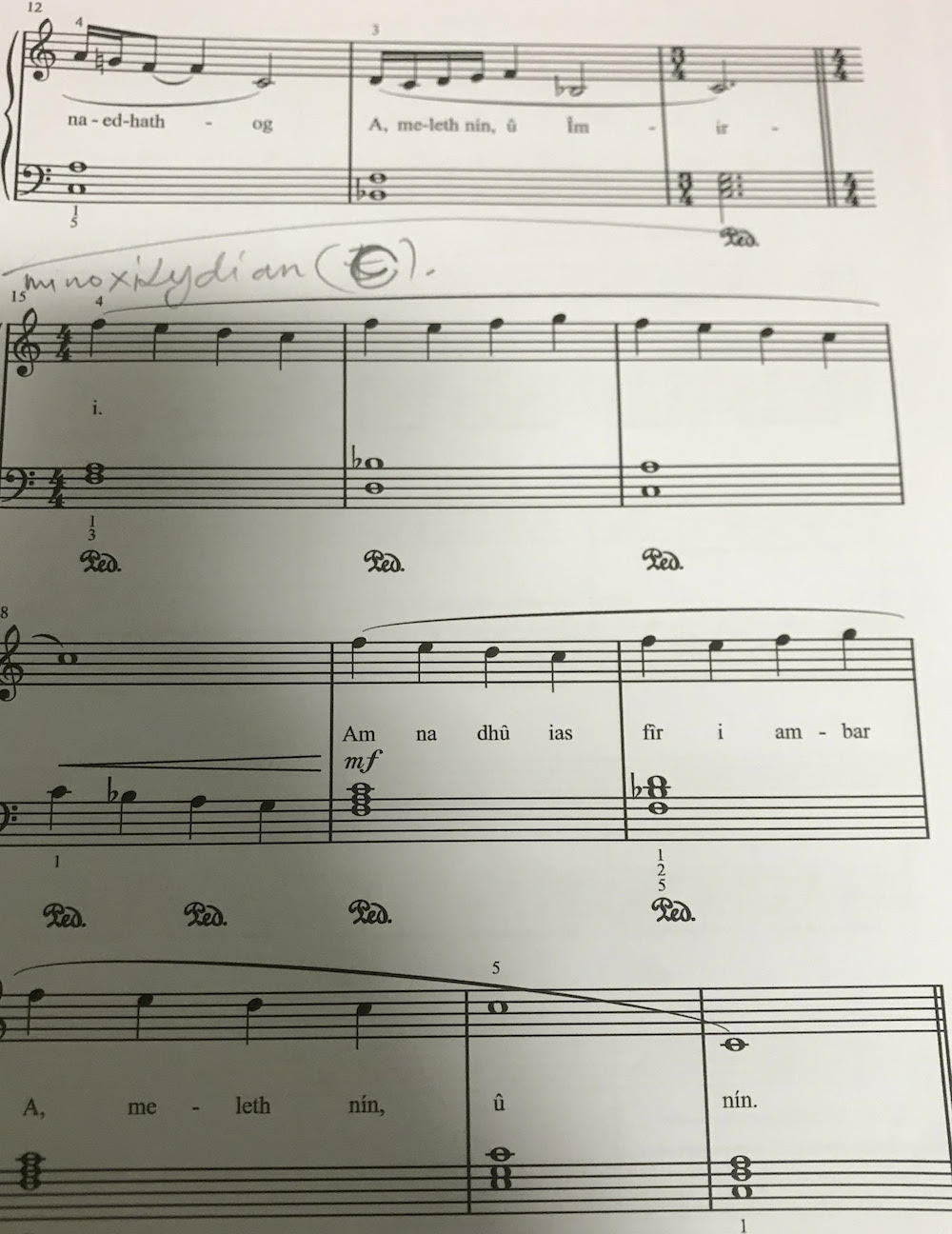 Aaron sort of hinted at this in comments already, but note that an entire piece doesn't have to be in a single "mode," and even a small section of piece may not conform to a specific mode.

Lots of pieces of music use chromatic harmony that doesn't fit into a single diatonic mode category as well, as I think is true in this piece.

The piece I suppose begins with a sense of D Lydian (with the G♯), but the opening bars cycle back and forth between this D major-ish mode and B♭. Major third relationships are frequently used in movie music tropes to represent "magical" sorts of associations (as well as other mystical or emotionally charged moments centered around surprise). Jumping back and forth between what sounds like a D major chord and a B♭ major chord gives this sensation of unusual key juxtaposition that you're unlikely to find in standard major/minor keys (or standard diatonic modes).

After that, beginning in bar 5, we hang out more in that D Lydian universe, but the A♯ pushes toward B minor. Again, we oscillate back and forth now with something centered around D going down to B (and third below) and back up (see bass line). The D major-B minor relationship is more common (standard relative major/minor), as opposed to the prior D major-B♭ major juxtaposition.

Ah, but then in bar 9 instead we're surprised with B major instead of B minor. We hang out there briefly.

The end of bar 10 with the C♯ major chord feels like perhaps it's going to lead toward a modulation to the dominant of B (i.e., F-sharp), but instead we push back up toward a D major chord again and end up in the sort-of D Lydian universe that we began with. (We could also hear this chordal motion of C♯ to D as akin to a deceptive cadence in F♯ minor, the dominant of B minor.)

After that, the piece again walks the bass line down, but instead of using the C♯-B route to B minor/major as used earlier, now it marches down D-C-B♭, giving a more smooth transition toward that B♭ chord than we saw in the opening bars.

And then we end up in what's basically F major, led in with the IV-V-I kind of motion that arrives on the downbeat of bar 15. I'm not sure there's justification to think of C as the local modal center at that point. The progressions and bass line feel very centered around F, though I guess the melody does keep coming back to C. But I think that's a deliberate choice of the composer to end this section feeling a bit "unresolved" (as most movie music connects to other sections), not because there's a deliberate intent to feel C as the "tonic."

To sum up: I don't think the first part of this piece fits into any single coherent diatonic mode. Instead, it's based around a harmonic oscillation first from D (sort of Lydian) to B♭ major; and then from D to B. There's a brief hint at maybe tonicization toward F♯, but a deceptive cadence progression lands us back in D. Then the composer uses that D-B♭ "window" opened in the first few bars to transition toward F major.

Not the answer you're looking for? Browse other questions tagged harmony modes analysis modal or ask your own question.

46
Key signature for writing in modes other than major and minor
1
How to use modes in popular music?
5
"Tonal Tones" and "Modal Tones" - what do they mean?
4
How could the medieval chants be classified before any notation was available?
1
How do you establish a feel of the mode?
3
Is there such a thing as a Harmonic key besides for Harmonic Aeolian?
4
Are the 1,4,5 the primary chords in all modes?
4
In what way is music considered to be in a mode when accidentals seemingly contradict the mode?
3
What are the modal characteristics of major modes?
0
(REVISED): Roman Numeral Analysis of Fuchs- 'Mother Tells a Story'