How do I play this chord with an overlapping sharp and flat? 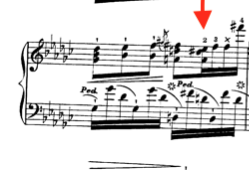 How do I play this chord (underneath the red arrow in the attached image) that seems to have both D sharp and an E flat? Am I misreading it?

EDIT: the clip is from the piece "Manchega" by Louis Moreau Gottschalk. Here's a link to the sheet music I'm using: https://imslp.org/wiki/Special:ReverseLookup/3054

It's a mistake. It should be E# instead of D#. It's clearly audible in the recording:

Possible reason for the mistake is that D# is much more commonly used than E#. However it's a very reasonable use. The section is in the key of Gb. The first half of the measure is Gb chord, while the second half is D chord. F# is a chord tone for D, while E# is #9, a common alteration; or perhaps it's a chromatic ornamentation of F#. Writing F instead of E# would not only require using more accidentals in the measure, but also wouldn't make harmonic sense.

As @user1079505 points out, recorded versions of the piece include an E#. This begs the question, though: how do they know to play E#?

One way would be a more modern edition that contains the correction. But that still begs the question of how the editor(s) knew.

How does an editor or performer know that E# is correct?

Gottschalk's original, handwritten manuscript is held by the New York Public Library (WorldCat). In principle, a researcher could consult the original to see if Gottschalk wrote an E#, with the error being introduced in the process of publishing the first edition. Unfortunately, the NYPL only has the first page of the manuscript, which does not contain measure 39.1

However, even without access to the holograph, examining the published edition (presuming the remainder is correct) gives clues supporting E#.

Measures 33, 35, and 37 all contain exactly these same pitches. In measure 39, beat 4 is re-notated from Gb to F#, because the underlying harmony is D major. (This serves as a pivot chord. It's the vi chord borrowed from Gb minor [i.e., Ebb major] and also the iv chord of A major [i.e., D major], where the music arrives on measure 40, beats 5 and 6.)

Given the melodic consistency and harmonic context, there is no reason the F# would be decorated with Eb, which is musically jarring at least, if not altogether nonsensical. E# maintains (enharmonic) consistency with the preceding three occurrences, which contain F.

Further, the D# in the same chord makes little sense for the same reason (consistency with the other occurrences of the gesture) as well as the presence of D in the left hand.

Even more reliably than the autograph, this makes clear Gottschalk's intention that the Eb should be E# (and the D# should be D).

1 That only the first page is in the collection (call #: JPB 84-13 no. 31 [Score]) was confirmed in email communication with the library on 22 Sept 2021. The only other edition held by the NYPL is the William Hall & Son edition, which does contain the error. That edition is available on IMSLP.

Looks like a misprint to me. I suspect the sharp is intended for the E.

Not the answer you're looking for? Browse other questions tagged chords accidentals or ask your own question.

5
What is this chord (spelled 2nd, 4th, 5th) and how is it used?
8
How is this piano chord fingered in "Graceful Ghost"?
7
Double- to single-sharp notation in lilypond - how to get rid of natural symbol?
16
Chord stretched across treble clef and bass clef
2
Can you solve these figured bass queries?
2
How do I describe this chord (A in bass with F# upper structure triad)?
6
Can this chord be played or is it transcribed incorrectly?
6
Does an altered 9th/11th/13th imply the full tertian stack?