What is the generalized terminology for continuous changes?

In some musical dimensions, termini and notation for continuous changes are common:

1st question: Do more of these terms for specific continuous changes exist?

They are useful by specificity. Once the termini are learned as vocabulary, they can easily be read and understood, without wasting much thought on them. Yet, specificity also limits usefulness. New terms would need to be defined and learned for each dimension, where smooth changes are possible. E.g. a smooth transition in articulation from staccato to legato; or contiuous variations in timbre (e.g. by shifting the point of attack on stringed instruments). In this situation, inflation of terminology seems undesirable. Especially since these new terms would be used rarely anyway. Instead, a generalized indication would be helpful.

2nd question: Is there an established generalized indication for continuous change?

almost self-answer: But this generalization is constructed – I do not know wheter it is established as notation – and potentially etymologically incorrect (Music-Italian pidgin).

The lengthy formulations poco a poco più *, poco a poco meno *, with the placeholder *, might be the correct Italian musical terms. The severe shortcoming of these terms is the needless freedom of choice, which renders them unpractical. poco a poco più forte and poco a poco meno piano would both mean increasing volume. A flip of the direction (più–meno) alongside a negation of the argument (forte–piano) leaves the statement invariant. Therefore these terms burden the readers by requiring too much thought when converting the words into meaning. Moreover "poco a poco" is a relatively large protion of the text to only convey the information of continuous change. And it is not easy to abbreviate.

A clear, positive definiton is necessary; preferrably one which allows for abbreviation. Would graduale * have same notion of continuity? Is it correct as a prefix, or should it be postfix, * graduale? Is the abbreviation grad. conflicting with other established terms?

I do not seek to replace crescendo etc. with a generalized construction. I am searching for a way to consistently construct pendants of crescendo etc. in dimensions, where the respective terms have not been coined so far. I only chose dynamics as an example here to demonstrate, how the generalization would work in other dimensions. Of course a consistent generalization must work as well in all dimensions eventually.

I'm under the impression that you're looking for consistent, absolute and specific indications of possible ranges.

Well, that is mostly pointless in the common sense of music: while mostly based on math and logic, we all know that music is way beyond all of that.

Remember that music is not what is written on a score, but what is played by performers (just like a play, a movie or a tv show are directed and performed: what's written is just a guide, the interpretation is what makes it actually "music").

Notations like pp or Allegro are not absolute, and even more specific notations such as tempo markings are not to be considered as strict indications that must be followed (take, for instance, the matter of Beethoven's tempo markings). It's music, it's art, not a basic mathematical computation.

Two quavers make a crotchet, not a specific absolute duration in time, as much as ff doesn't indicate a specific decibel amount.

A clear, positive definiton is necessary

But, is it? Even assuming a grad f writing, "how loud" would that f be? And how should it be gradual? Linear? Variable? Logarithmic? Sinusoidal? Cubic? Quadratic? Exponential?

Remember that notation is, as said above, just an abstraction of what becomes interpretation (and perception).

That said, things like "poco a poco meno piano" should not be considered as proper, nor acceptable standard. Things like these are just wrong, as they are usually based on (wrongly) assumed transliterations that actually make no sense.
I can recall a piece I played some time ago, taken from one of the many transcriptions we got for a famous Strauss waltz: 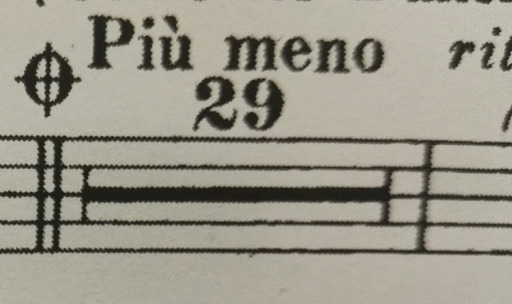 Well, this "more less" doesn't make any sense (in italian, and at all), as much as "poco a poco meno piano" would.

Written notation should ease reading, in a way that players can focus on how to play, not understanding how/what they should play.
The problem with "poco a poco meno piano" is that it introduces a double negative, which creates confusion in music as it creates in language: does "meno piano" indicate "softer than piano" or "louder than piano"?

Coming back to your question, yes, there are common conventions for gradual changes, and they also include "gradually" as much as "poco a poco", but also include variations like "sempre più" or "sempre meno".

Generalized but specific indications for those cases are not useful, nor required. Even if we "decide" a convention for continuous change, the effort of deciding it wouldn't provide any benefit.
In fact, conventions actually exist, as you already pointed out, as it's any writing notation that leads to a more specific notation: a "poco a poco", "gradually", "sempre più/meno" or hairpin that leads to a specific dynamic (or tempo) notation. We don't need a specialized terminology, we just need composers and copyists to properly indicate their intentions.

If you're looking for a standardized terminology for such changes, I doubt there's one.
It's just a progression.

In company with my two comments, I'd suggest there is one typographical convention that can clearly convey an ongoing, progressive change: a series of dashes or underscores. This can help clarify intentions: Imagine, printing "cresc." in measure 5 and "dim." in measure 10. Should we continue growing louder and louder through those 5 measures, or does the crescendo run out of steam at some point? What if the dim. is 20 bars later? (True, you could just use elongated pictorial "hairpins" in this case, but the premise holds for markings with no pictograms, like acceleration and deceleration.) So I'd suggest making your intention as clear as possible, probably with text, preferably in the vernacular aside from universally recognized canonic terms ("Transition from pizz. to snap pizz."), followed by dashes indicating the duration of the change.

There isn't such a generalized term in music.

If you don't want to use one of the common expression or instruction phrases just write what you want in English. For example: "dampen the string gradually."

Personally, I would not be too specific unless it really, really mattered. For example: "gradually dampen string over whole note until barely audible." That's very specific, but possibly too wordy. It's a judgement call.

It might help to add an example of the instruction you want to handle. It isn't clear why a general, all encompassing term is needed. Plain language instructions will be understood regardless if you mix synonymous terms like "gradual" with "little by little", etc.

Not the answer you're looking for? Browse other questions tagged notation sheet-music terminology or ask your own question.