How to write rests in triplet semiquaver groups

In the second bar I have to add the correct rest and it is a triplet semiquaver group Do you have to use separate semiquaver rests like I have done or could I have used one quaver rest instead?

Just as inside a normal measure, within a tuplet any note or rest values that sum up to the length of the tuplet are permissible. Inside this triplet semiquaver group, it would be acceptable to use a quaver rest instead of two semiquaver rests.

Best practice for notation would likely involve visually separating each of the three semiquaver notes within reason. If there were something strange going on, such as a double-dotted demisemiquaver note within the triplet, I would highly recommend splitting it along the individual semiquaver divisions and tying them for visual clarity (with rests, ties are of course unnecessary).

This case is a bit debatable; as one commenter pointed out, the visual similarity between the quaver rests inside and outside the triplet may be confusing enough to warrant the two semiquaver rests. But I am not aware of any general rule forbidding note values larger than the unit of tuplet division.

In reference to rests in compound time, Gould (p.163) states:

"Rests at the beginning of a beat may be combined" and "Rests that follow a beat should expose all three divisions."

DOES the question specifically ask for a rest'? Or 'rest or rests'? 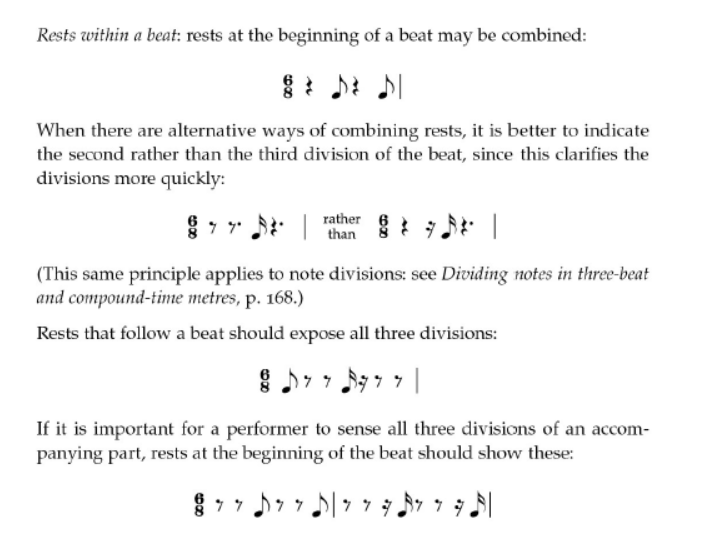 Either will do, both are technically correct. However, the point of writing out any music is to make it the easiest to read for future players. Since triplets are essentially three, it's more simple to use those two semi rests rather than a quaver rest - it sort of follows the pattern, thus will be easier for some to read.

However, on a technical point in the question itself, an asterix denotes one rest, I guess from that question - which may well indicate that one rest is expected within the triplet, and one other for the rest (sic) of the bar. Could rest (sic) on the way the question is phrased - as far as the question itself is concerned. Not the point of OP's question, but a point nevertheless.

5
Why is the last semiquaver outside the last triplet of the measure?
5
What does this notation (bar joining notes) mean?
4
Grouping Syncopated Notes
9
Reinforcing meter when dealing with alternating 1/8 and 1/16 notes and rests
7
How to clearly notate tuplets, both "simple" and "complex," in irregular meters
9
How to write 2 crotchet (quarter note) triplets when they don't start on the down beat?
2
Write three sixteenth notes as a triplet in Musescore
2
Problem Understanding Specific Rules of Adding Rests
4
Notation of staccato rhythm
4
Sextuplet vs pair of triplets