Is the length of a G.P. that has no fermata discretionary?

In mm. 342 and 382 of the last movement of his Piano Quartet n. 3, Op.26, Brahms writes G.P. over one measure's rest (with no fermata). Is the intention that this General Pause should last exactly one measure, or should it be interpreted as being at the players' discretion regarding the length? If of discretionary length, is it within bounds to make rest shorter than the number of beats in a measure? What if there were a number of measures indication, e.g. 2 along with the G.P. -- wouldn't that mean a G.P. of exactly 2 measures?

Is the explanation above saying that a G.P. over a measure's rest is identical to a fermata over the rest? Just beneath the illustration, the source makes a distinction when explaining a cesura and a cesura with a fermata:

As I see it, a measure's rest with a fermata should generally be longer than a plain measure's rest. Put another way, can a G.P. be exactly the length of the rest, or must is always be longer, i.e. with an implied fermata? Is it more than a reminder that no one is playing?

General Pause Indication in orchestral scores that all the players are silent at that point. New Oxford Companion to Music

That is how I always understood it, as heads up/confirmation that no instrument is playing -- not per se an indication of the length of the pause.

General pause In a score for an ensemble piece, "G.P." (General Pause) indicates silence for one bar or more for the entire ensemble.[7] The marking of general pauses is relevant, as making noise should be avoided there—for instance, page turns in sheet music are avoided during general pauses, as the sound of players turning the page would be audible by the audience.[8] Wikipedia

G.P. and a fermata have entirely different meanings. OnMusic Dictionary is wrong.

The two signs are often combined to indicate a silence of indefinite time. In musical theater, for example, this could even mean a whole scene lasting several minutes.

A caesura can have any length, but typically it would be fairly short. Combining a caesura with a fermata gives the performers a hint that it could be a lot longer.

"L.P." would be highly unusual, in fact I don't think I've ever seen it.

I just found this in The Definitive Guide To Music Notation (2016) p.190, which is quite specific about a difference: 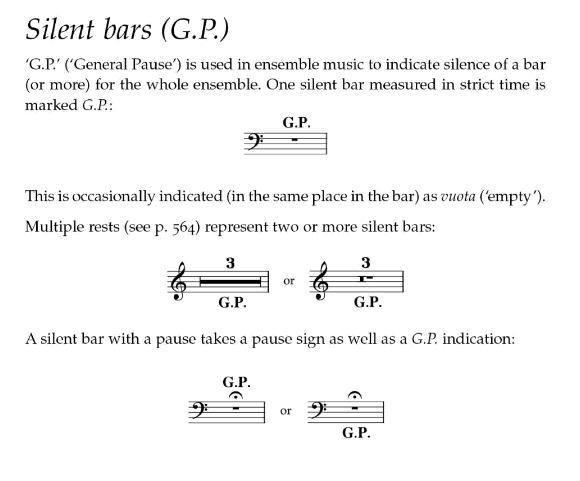 As I imagined, working backwards from a multi-measure G.P. as logically indicating a precise total time, a G.P. with a single measure would also be one exactly measure.

With reference to the Italian alternative, vuota, the Riccordi Enciclopedia della musica has:

[empty 3. empty measure -- a measure in which there are no notes, but only the equivalent rests, during which playing stops (for only/just the duration/[time] value of the measure).] Note the qualification. (Italian is curious in that battuta can mean measure or beat. To distinguish, one would say Sulla terza battuta nella seconda misura. -- On the third beat in the second measure.)

Some definitions from authoritative sources:

A term sometimes used interchangeably with 'pause' to indicate a note that is held for longer than its written value. More specifically it was used in the Viennese Classical tradition ... to indicate where a singer or wind player should take a breath...; it is also used to denote the holding up of the metre, often heard in the Viennese waltz.1

An indication in orchestral scores ... that all players are silent at that point. It commonly occurs after a climactic passage, and was one of the notable innovations of the 18th-century Mannheim school of orchestral playing.2

A rest for the whole orchestra, usually unexpected.3

In a score for an ensemble piece, "G.P." (General Pause) indicates silence for one bar or more for the entire ensemble. The marking of general pauses is relevant, as making noise should be avoided there—for instance, page turns in sheet music are avoided during general pauses, as the sound of players turning the page would be audible by the audience.4

A sign indicating that the note, chord, or rest over which it appears is to be prolonged at the performer's discretion. It is sometimes placed over a bar-line to indicate a short silence. It may also be used to indicate the end of a phrase, section or composition.5

[A] sign ... showing the end of a passage or indicating the prolongation of a note or rest beyond its usual value.... Sometimes it indicates that a cadenza or flourish should be performed.6

The note [or rest] should be prolonged beyond the normal duration its [notated] value would indicate.7

While there seems to be popular disagreement about whether a G.P. (without further indication) is of fixed or performer-determined length, the authoritative sources do not comment in this regard, but they are explicit that a fermata extends the length.

It's reasonable to conclude that Brahms intended a pause of exactly one measure. In both the G.P. and fermata cases, a shorter-than-notated silence would be indicated by a shorter associated rest or a caesura mark.

Not the answer you're looking for? Browse other questions tagged notation terminology interpretation or ask your own question.

13
Do some measures get no numbers, in an opera score?
3
Fermata until note fades away
7
Fermata over Rest
13
Opposite of a Fermata?
3
What is the purpose of this notation that has short lines through the note stems?
20
Fermata over a rest at the end of the piece?
2
What is the meaning of the word ‘gracile’?
4
Ritenuto / Fermata / Tempo change
2
Proper use of fermata marks on sheet music