How Do I Play and Understand the Note Structure in Jimbo's Lullaby, Debussy (Bar 9 Piano)

How Do I Play This Section of Jimbo's Lullaby (Piano)? Novice (Self Studying) Music Theory and Piano

In the segment of the piece shown below (measures 9–13), which notes and dyads do I play on which beat(s)? Specifically, measure 9. 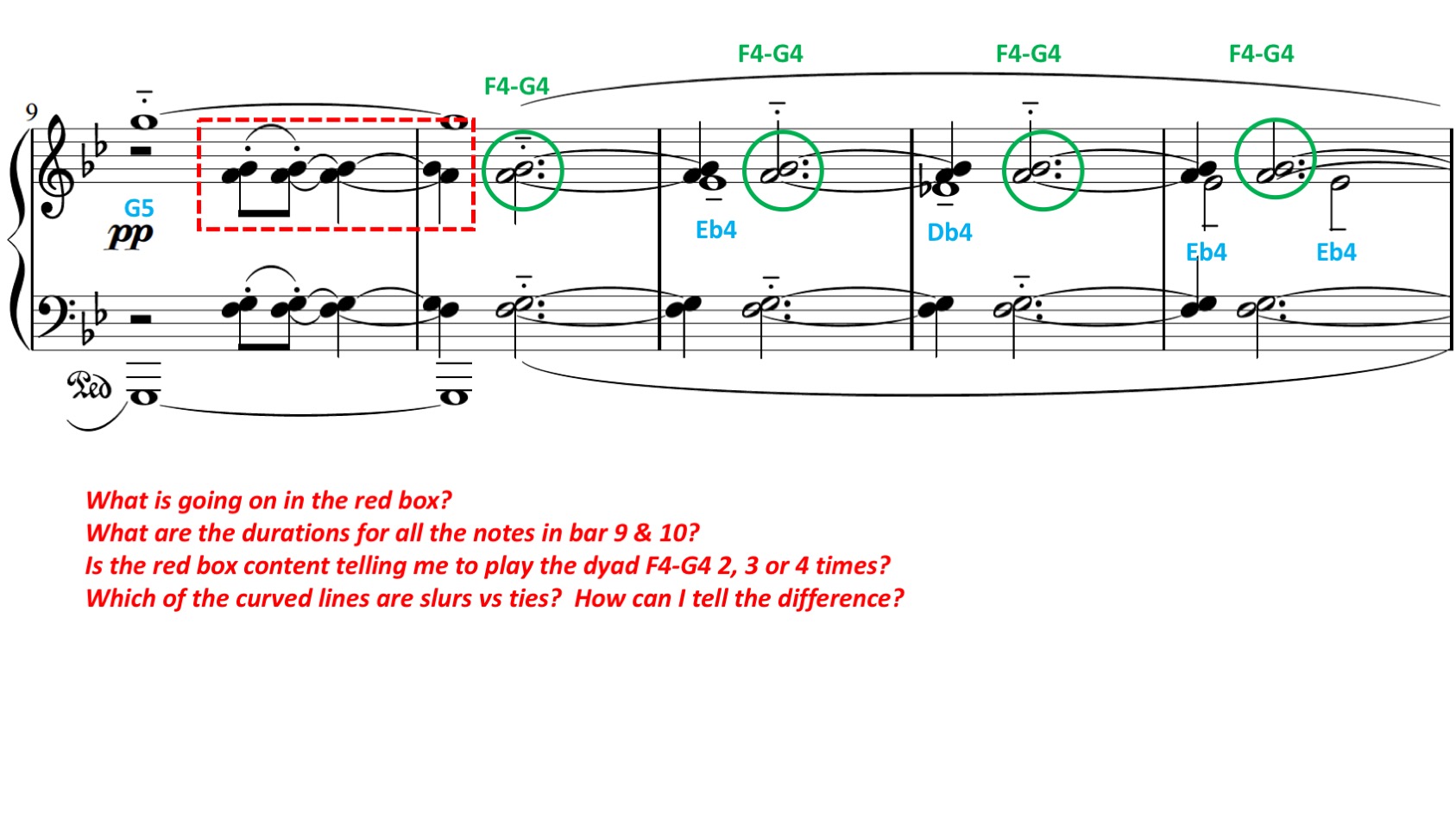 I've been trying to use the below video to figure it out. 32 seconds in on this video, the pianist plays Bar 9 of this piece. I am very confused as to the ties and slurs in Bar 9 and what he is actually playing. The time signature is 2/2 (think there is a typo in the key signature). For the measures shown and the video, it appears the pianist is playing G5, F4-G4, F4-G4, F4-G4, Eb4, F4-G4, Db4, Eb4, F4-G4, Eb4. I counted the number of F4-G4's in the video so I know how many he is playing, but I am not sure which notes correspond to which of the F4-G4 dyads (in the red box in the attached pic).

(Secondarily, when I attempt to add up the note values for the first bar (9) I am confused as to how you can have a "whole note" plus all the other notes within the bar, and all their values add up correctly.)

The video I'm using as a reference is:

A portato indication is not uncommon in piano music. M-W's definition, semidetached phrasing in musical performance, is good. It's also described as somewhere between legato and staccato with reference to the piano. It's almost always dots under a phrase/slur marking for piano; it can be dots or dashes for string. 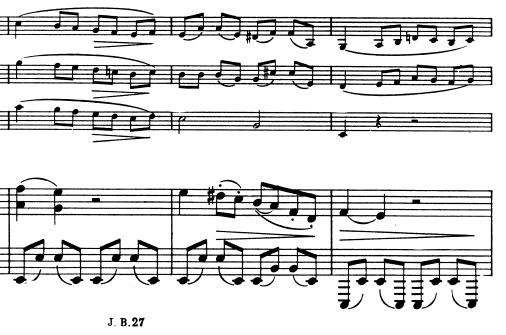 The right hand has two separate phrases, the second of which consists of two slurred notes and two portato notes. Brahms is clearly indicating something about the duration/touch of these notes -- a bit detached, but still within a single phrase with the two legato notes (it's a slow movement, so a short staccato sounds odd here, IMO). The upper strings, however, have two bows over the last four eights notes, not one. These match the two phrase marks in the piano's left-hand for those beats.

In the OP's Debussy example, the flats are misplaced in the treble clef key signature. The portato (ending legato/phrase mark and the dot over the second F+G) in the first measure can refer only to the attack and the notes' relation to the first F+G and not their length/release, since the tie to the following notes takes precedence.

There's one point to emake clear: the slur above the staccato which means portato:

Not the answer you're looking for? Browse other questions tagged piano rhythm articulation or ask your own question.

20
On the piano, how should you play staccato with the pedal?
17
How to play same note legato?
3
How to play a note while the same note is being held?
4
How does one place a beat 'on' a given note/rest value?
3
How to play the piano softly and quietly
4
How do I read this piano sheet music?
6
How broad arpeggiated chords are reasonable?