It contains a series of arpeggios.

What are the rules to write such arpeggios?

Arpeggios are an incredibly common figure in violin music. Most of the limitations you seem worried about simply don't exist. Arpeggios are just notes to us; there are no special rules about which strings or fingerings are expected.

If you want to be extra nice to the players and make everything easy (or if you have very fast arpeggios that need to be easy):

None of these are rules; in fact a whole piece that observed all of them would be a dream. But they should give you a basic concept of what is and isn't easy.

As for cellos, I don't play one. Most of the above would still apply, but if there are further intricacies, I can't tell you.

As Peter said, when in doubt, ask someone who plays the instrument to test what you've written.

I have played this particular section in the Mendelssohn before, so I have some knowledge about it.

Mostly, the fingering depends on the speed at which you are going to perform the arpeggio and the bow stroke. For example, most violinists (including me) would play this section of the Mendelssohn with a ricochet or a brush stroke. For those types of bow strokes, it is recommended to have the notes go across the string. An example of a piece with arpeggios that don't go across the string for every note is Wieniawski's Scherzo Tarantelle. Arpeggios in that piece have one note on the E string and two notes on the A string. It is not mandatory for the arpeggio to stay in one position and go across strings; if the arpeggio isn't supposed to be fast, shifts can be made while playing it. However, consider the tempo when choosing to put a shift. Jumps, again, are based on the tempo, but as most arpeggios are played quickly, try to put most of the fingers within reach and without too much stretching.

I saw in a different answer that perfect fifths without open strings should be avoided. This is not necessarily true, and Scherzo Tarantelle contains multiple perfect fifths with the same finger without jumps. Also, avoiding keys with a lot of sharps or flats isn't necessary either; as long as the arpeggio can be played without too much finger movement or awkward hand placement, the accidentals shouldn't matter much.

Finally, it is not mandatory to combine an upwards arpeggio with a downwards one. For example, in the first movement of the Tchaikovsky Violin Concerto, the solo violinist ends the exposition into the first major tutti with a series of ascending arpeggios.

As I am a violinist, I don't have much perspective for the cellos so I will leave my advice at that. 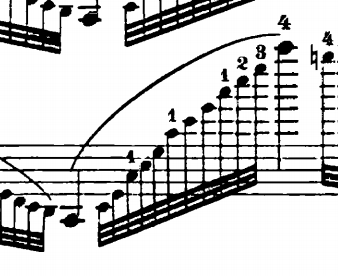 This passage from the end of the Mendelssohn cadenza, though, are an example of a technique that I don't have a good name for. I've seen it referred to as bariolage and ondeggiando, but technically "bariolage" applies to passages that use different strings primarily to highlight their differences in timber, and "ondeggiando" can apply to two-string patterns.

Whatever you call it, the point is that you voice chords in ways that put a note on each of the four strings, and then rapidly roll the bow across all four strings. The effect can be very arresting, since one can roll the bow much more quickly than one can change left-hand fingers, so you can spray out scintillating showers of 16th notes while only moving your left hand perhaps once per beat or per bar. Another prominent example is in Bach's "Chaconne" from the D minor solo violin partita. In this case, Bach starts out by notating all the pitches, then starts just writing stacked chords with the indication "arpeggio," assuming that you can see from the example how to break them apart.

This passage presents challenges to interpretation. For one thing, he starts with a "zig-zag" pattern (arguably "double ondeggiando" juxtaposing two overlapping pairs of strings) rather than arpeggiating straight up and then down, but later chords don't accommodate that (and are traditionally done in the same style as the Mendelssohn example), and some chords have three members and some four (do you play triplets? 16ths? Do you double a chord member, or "hop" the bow over a non-adjacent string?).

For a composer, you could take the same approach and leave fingering and voicing up to the performer, or you could spell it out. In any case Peter's comment is important: get the input of an instrumentalist. This cross-string technique is highly idiomatic to bowed string instruments, and while we can "cheat" in a number of ways (yes, you can change fingering within the chord, but you don't want to; yes, you can put two notes on one string or skip a string, but it seriously challenges the bow articulation), you are choosing a technique in which the physicality of the instrument dictates the voicing, and might as well write idiomatically. Mendelssohn worked closely with the violinist for whom he was writing the concerto, Ferdinand David. The fact that Mendelssohn notated a cadenza at all was a bit of a break with precedence. A Mozart concerto would expect the performer to improvise a cadenza. I'm having trouble finding the citation for this, but if I recall, Mendelssohn was reluctant to provide a cadenza himself and David encouraged him to, but the result was the product of a lot of correspondence between both, and just as much David's work as Mendelssohn's. (This autograph score shows an early version; it does contain the arpeggiation, though like Bach he notates it as stacked chords, but David eventually stretched it to a much longer cadenza.