Is this a good pedagogical idea? Or am I better off learning another minor scale pattern? 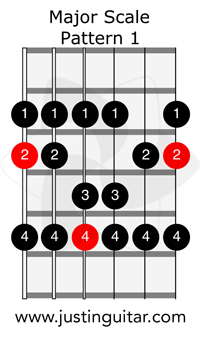 I think it's a good idea, because so many things in music are about relative relationships. You have a deeper understanding of scales overall if you think of the commonalities between major/minor scale and the small changes that make them different.

As an aside I would look for, or make, diagrams that label the scale degrees rather than the fingers. With that labeling your scale diagram looks like... 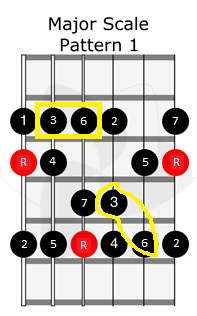 The major third ^3 and major sixth ^6 scale degrees are circled in yellow. Those are the two modal degrees that define the scale as major.

If you just shift those two degrees down one fret, the tones become the minor third and minor sixth scale degrees, and the scale is now the harmonic minor scale. 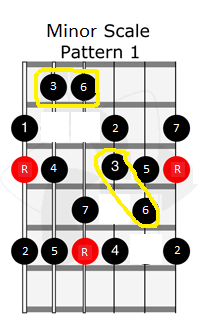 There are three types of minor scales, but we don't need to get into those details now. The point is all of them can be formed with relative changes to some other scale, like the major scale as a sort of default reference point.

You can expand that idea further and divide up scales into tonal degrees - the root, perfect fourth, and perfect fifth - and variable modal degrees - second, third, sixth, and seventh.

If we put the tonal degrees into the big dots and the modal degrees - natural and lowered forms - in plain numbers, the diagram looks like... 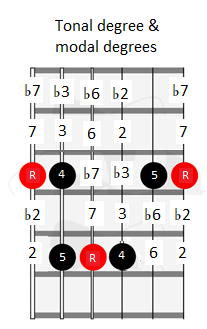 At first glance that looks like a big mess of numbers. But the idea is to learn what modal degrees define each scale and then fill them in between the tonal degrees or shifting from some base scale.

Natural minor will use ♭3 ♭6 ♭7, fill in those between tonal degrees or drop them down from natural 3 6 7 of major. Then, when that scale is familiar to you, you can make further changes. For example, dorian mode will take that natural minor scale and raise ♭6 up to natural 6. Or, you can get the phrygian mode from natural minor by dropping the natural 2 to ♭2.

The type of box your have is very popular, and you see it a lot for the "CAGED" teaching system for guitar. But, you can also think of scales as combining two tetrachords, and comparing relative relationships. There are four main tetrachords - major, minor, phrygian, and harmonic. Just those four patterns can be combined to make all the major and minor scales, diatonic modes, and several important "exotic" scales. The idea is not as popular as "CAGED", but then again "CAGED" will keep you stuck in diatonic scales only. You can find tutorials online about the tetrachord method for scales. 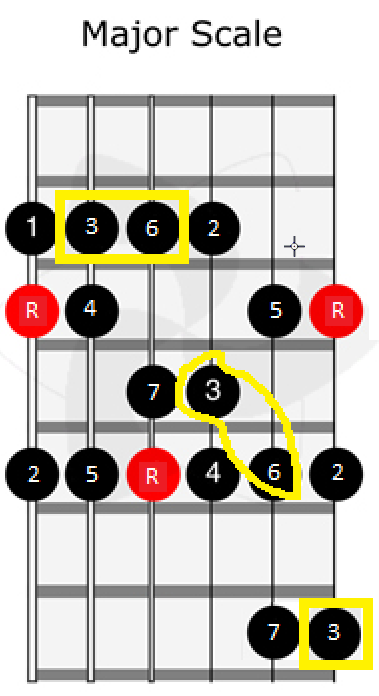 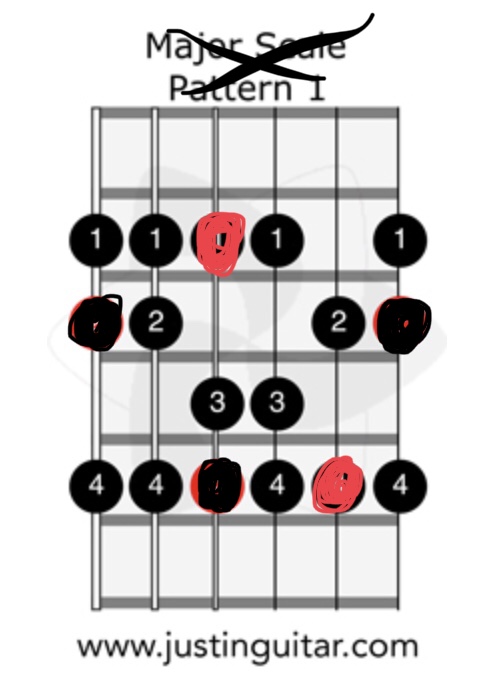 If you go all the way to pattern 5 and change the major roots to the relative minor roots (in this counting backward, 1-7-6) it gives you a minor scale with the roots on the 6th, 4th and 1st strings, just like the major scale you are using: 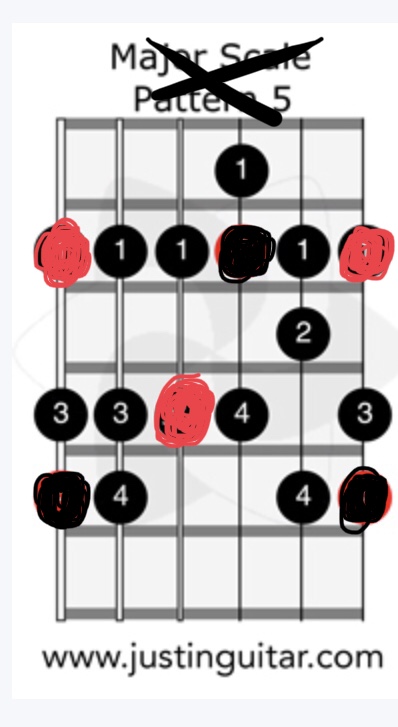 This pattern is good for minor keys because it allows you to play the roots in 3 different octaves, just like the major scale you are comfortable with. In the end you don’t really have to re-frame it, it already exists in another pattern.

Like I said earlier though, the natural minor scales are available to you within all 5 of the major scale patterns. All you have to do is go either backward or forward from the major tonic to the 6th degree to find them.

Using the natural minor notes, you'll really only need to re-jig the pattern you know for its relative major scale. Pretty straightforward.

The only real problem that occurs with minor pieces is that the leading note is missing. The seventh note from a natural minor scale will need, in a lot of cases, to be raised, so it's one semitone under the root, not one tone like it will be in the natural minor. So, if you bear that in mind, and compensate accordingly, you'll have a slightly different pattern from the relative major, with its fifth note sharpened (up a fret). Wouldn't worry for now about melodic minor notes - they'll come later.

If you decide to learn a 'new' pattern, you'll probably be pleasantly surprised that some of the notes are in the same place as what I've just described anyway!

5
Is it necessary to learn a new scale to improvise over it?
15
Difference between minor and major pentatonic scale boxes?
10
Should I learn the notes of all the scales
3
Why did Segovia use a different pattern for the B minor scale?
4
Chord construction using the minor scale
1
Right approach to learn major and minor scales
4
E major and A minor together are not in scale?
0
A Blues Major Scale and A Blues Minor Scale meet at one point?
3
Why is there no "half/minor-third augmented" scale?