How to approach the collé bowstroke?

This section is from the bottom of the second page of the First Movement of the Tchaikovsky Violin Concerto. A specific bowstroke called collé is to be utilized in this section. 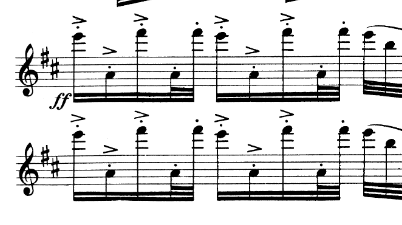 I am not a professional violinist, and up to this point, most "short" bowstrokes were fairly easy for me - I had even successfully mastered the sautillé bowstroke from the 3rd movement of this piece. However, the collé here has presented a challenge for me.

Upon searching about the bowstroke, I found this definition on https://violinonline.com/bowstrokes.html.

Collé means glued. It is a very short stroke, and begins with the bow lightly contacting the string with a distinct and short, sharp pinch. The bow is then lifted to prepare for the next stroke. The resulting sound was described by Galamian as being similar to pizzicato with the bow. Although collé usually has no articulation markings, dots are sometimes used.

My attempts at the bowstroke are only half-successful. The initial "short, sharp pinch" is not too difficult for me. However, as shown in the definition of the bowstroke, the bow must be "lifted to prepare for the next stroke." Unfortunately, this is more challenging. The first note of the phrase, the E, is on a down bow. This means that the bow must be lifted and placed on the string on an up bow. In addition, this note must receive the same "short, sharp pinch" as the first note.

What I Have Tried

As I said before, the initial pinch is not too difficult for me, at least on the down bow. For the up bow, I had to make some concessions. Although the first E must be loud, I had to use less bow in order to be able to lift the bow and put the bow back on the string. Why did I do this? Using less bow meant that I would be closer to the lower middle of the bow, making it easier to lift and place the bow back on the string. Still, this only worked at very slow tempos; at higher tempos, this often led to crunching or an accent on the up-bow note. However, this section is not supposed to be that slow, and the effects on the sound are detrimental to the performance.

Is there an effective way to play this section with the correct collé bowstroke, while maintaining a steady tempo and getting a desirable sound (i.e without crunching on the retake or randomly accented note)?

Collé is tricky to learn, and much tricker to describe in words alone! I have to ask the obvious question—are you trying to do this on your own, with no teacher? A good teacher can convey this much more easily than the internet can. And learning the Tchaikovsky concerto without a teacher is a very ambitious goal as well. Don't let me squash your dream, but I urge you to get lessons if at all possible (maybe even talk someone into a single lesson on bow technique!), and to ask yourself whether there are other pieces you need to study to equip you for the Tchaikovsky.

That said, assuming that you already have a solid, healthy grasp of the way all the parts of the arm move in a basic detaché stroke (upper arm, elbow, forearm, wrist), then the finger motion that powers collé is vital to study. It plays a part in almost every other kind of stroke as well, including your basic detaché. Any accent can be made more explosive by it, or it can give an initial note a clean, precise unaccented articulation. (I find it especially helpful on baroque violin to avoid the squeak that gut strings can make when poorly articulated.)

A picture is worth a thousand words when explaining this motion; this video does a pretty good job:

. The idea is that your finger knuckles bend or straighten, letting you pull your fingertips in toward your palm or push them away from it. If your fingers were exactly perpendicular to the stick of the bow, this would simply lift your bow off the string or lower it, but since your hand slants, with your fingers pointing somewhat away from your body, the extension of straightening your fingers moves the bow an inch or so in a down-bow direction, and contracting them moves up-bow. I would practice in these steps:

By the way, there's nothing that says that this passage has to be true collé. Joshua Bell in this video certainly gives the notes a length that wouldn't qualify as it:

. That's probably because true collé is a very crisp, dry stroke, and by definition just doesn't produce that much total sound, and at that moment you're backed by the orchestra in forte; Bell is lengthening to project more (as a soloist often has to). But it's fair to say that this, regardless of whether the bow lifts off the string or how much the arm "follows through" to sustain the note, these notes would benefit from the "explosive" start that this finger motion can provide to the very first milliseconds of each.
Share
Improve this answer
edited Aug 18 '21 at 16:20
answered Aug 18 '21 at 14:34

Not the answer you're looking for? Browse other questions tagged technique practice violin strings string-instruments or ask your own question.

6
Is there a significant difference between playing one note or multiple ones per bow stroke?
14
String sticking to the fretting finger - how to avoid?
4
How to teach a young child the correct intonation on the violin?
8
How to improve jerky bowing on the violin
2
Problem with my new Gibson Les Paul Classic 2015
4
Reaching Low 1 on Violin
10
In violin, how do you know if you should play staccato or spiccato?
6
Microdynamics of bow rosin and strings
1
How can I properly use vibrato on the first chord of "Slow Dancing in a Burning Room"?
3
Best way to practice difficult runs