Can I skip learning minor scales if I learned major ones?

I learned the basics of the piano mostly from YouTube, intervals, various chords formulas including sevenths, diminished but I try to very closely follow the best practices. I learn inversions and hand positions through some more complex pieces (complex to my current level).

Everybody says it's super important to learn scales so I do. I printed Major and Minor harmonic scales sheets and to my surprise I already knew half of the Major scales through the pieces I learned (they had lots of arpeggios, for example RIOPY's "I Love you"). So now I put my efforts into the ones I don't know that well (stared with Major ones)

But should I learn minor? If I'm not mistaken the scales are identical with their relative minors, for example C is Amin, B is G#min.

Is there any particular reason for me to learning them?

Seems like you've made a good thorough start so why spoil it now? You already know that minor scales are the same notes as their relative majors. Or do you?

That's where it gets tricky! The natural minor scales have exactly the same notes as their relative majors, but there are more minors than natural.

The harmonic minors are the same as the natural minors, except the leading note is sharpened.

The melodic minors have the same lower 5 notes as the natural minor, but then have the rest of the scale just like the parallel major. Classical melodics ascend this way, but descend using the natural minor notes, jazz melodic uses the one set both ways, just to throw another spanner in the works!).

Then we have minor modes - all of which have m3 between tonic and 3rd note. So there's a bit more to it all than maybe you thought. But, why not get them all sorted, that way, you'll have a bigger, better inventory to pick from when playing.

The question behind the question is "Why do we practice scales?" And there are a lot of reasons. I hope it's not disappointing, but you don't stop when you've "learned" a scale; they'll be an important part of your practice all your life. What you mean by "learn" is "I've mastered one of the standardized finger patterns for scales in certain keys," but scales will be something you practice long after you've memorized these patterns.

So why practice scales (and arpeggios)? The usual explanation is one you already noticed: because you find them in "real music." For an example from my instrument, violin, Carl Flesch's scale book includes sections in octave double stops, and includes arpeggios of various chords. So if I've practiced a G diminished arpeggio in octaves, then when I hit this bit of the Mendelssohn violin concerto... 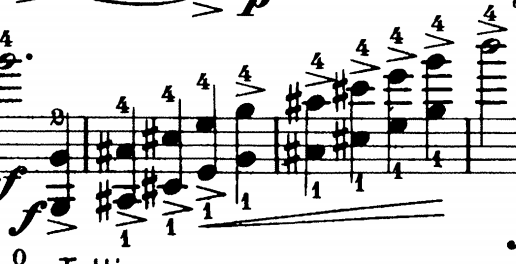 There's already been some speculation in the comments that scales and arpeggios don't make up that much of the music we play; I'd counterargue that they do, especially when we count arpeggios (and chromatic scale). In particular, we're all supposed to know scales so well that we can rip straight through them much faster than other passagework. From later in the same concerto, I'd better be used to where I shift in a B major scale...

But if the argument is "hey look, that's just a couple of measures out of an entire concerto; why waste time studying scales and just learn the 'real' pieces," then I'd point out that the scales and arpeggios are the parts that I can "take with me" to some other piece, and the thematic material is unique to each piece.

But besides the "because you'll use them" argument, scales make a convenient "abstract" way to practice lots of techniques. We don't have to think hard to remember which note comes after which in a scale; they're familiar and simple. So they make a good medium in which to practice, say, getting louder or softer, or playing longer or shorter notes, slurring pairs of notes or three notes, and even rhythm patterns. They make great warm up material, in which you can get both your brain and your fingers "up to speed" with something familiar.

Scale and chord patterns in minor keys are as important as majors. One reason is that there are passages in minor keys even in major key works (and vice versa).

One point is that minor keys have two "mutable" notes; scale steps 6 and 7 occur as two-note pairs (for simplicity, the "natural" minor uses the lower versions of both. Thus the natural minor scale is identical to the major scale a minor third above. A minor has the same notes as C major. However, many pieces use the mutated version of scale steps 6 and 7 (in various ways), often simultaneously. The fingerings may have to be adjusted on a piano (and definitely on stringed or wind instruments.)

As a long footnote (pedal point?), pieces are (mostly) written in "keys" rather than "scales" which are arrangements of notes in ascending order. (A piece in A minor may contain the exact same notes as another piece in C major but these will sound quite different.)

If you believe in the benefit to practicing major scales, then just know that all that benefit extends to learning other scales and modes. Here's a few I can think of

After major scales, minor scales are the next most common and important scales in Western music, so they are the clear next step. Even though the natural minor scales are just modes of their relative major scale, they are also important to learn and internalize on their own, as well as in relation to their parallel major (same goes for every other mode). However, the harmonic minor scale is extremely important, and melodic minor is a close runner-up.

It's up to you if this is worth it, but if you've put in the work so far, you might as well at least finish out the set. If you stop there (after 48), you'll be on par with many pianists in terms of scales, and you can only improve by continuing to learn and practice new scales.

I would suggest that you learn everything you can learn about music theory and your chosen musical instrument, the piano. Everything you learn will make you a better musician and a better player, and expand your horizons for making music. Learning minor scales will help you play better and more easily in minor keys, for instance, which is necessary for a large percentage of music in all genres.

There are certain artistic subjects - longing, loss, tragedy, tension, conflict, pathos, etc., which benefit from, if not flat-out require, a minor key to effectively convey the emotion or story within the music. Composers would be lost without both major and minor keys. Their work would be flat (in the non-musical sense) and lacking dimension and complexity as they try to express their ideas and feelings through music. It would be a bit like a painter having only half the colors on the color wheel at his or her disposal.

That is exactly what to do, work on the things you don't know, or can't do yet.

...But should I learn minor? If I'm not mistaken the scales are identical with their relative minors, for example C is Amin, B is G#min.

At this point you don't need an explanation of how minor keys work, you only need to know you can't skip playing in minor. IMO when you learn how minor harmony works, you really understand how tonal music, the major/minor system works.

I would learn the minor ones because many pieces include minor scales and other minor-key techniques. Learning the minors can also improve general techniques as they are arguably harder than the major ones.

Not the answer you're looking for? Browse other questions tagged piano scales or ask your own question.

50
How to know what notes will go together while improvising?
1
Major and minor scales
5
When learning scales, is it important to know which key is being pressed when?
0
How to know which fingers to use to play songs?
1
Where can I find a composition teacher?
5
When learning a piece, should I try to understand things beyond the notes?
4
Learning Minor scales through 7 patterns (Guitar)
3
60's pop music. How well known was theory, e.g. the pentatonic scale?
6
Is there a theory of heptatonic scales with 1.5-step intervals?