In reading from 100 Orchestration Tips by Thomas Goss, I've come across a tip which I'm perfectly happy accepting, but (perhaps as I'm not a horn player nor a trumpet player) I do not understand.

"... concert horn and trumpet players prefer not to have key signatures." 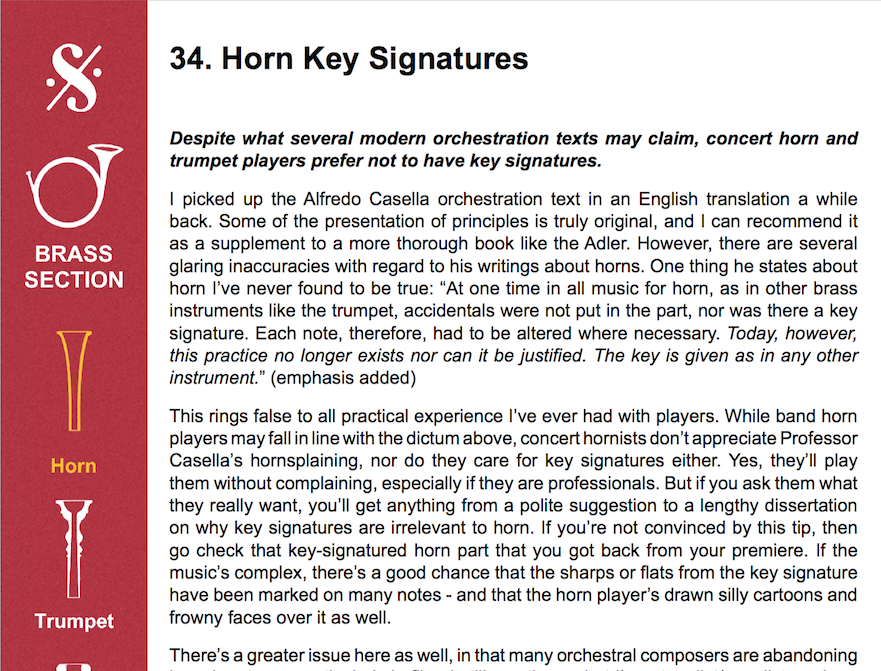 My question (primarily to horn players or trumpet players) is:

I don't need a lengthy dissertation but if you could at least explain the crux or main reasons that key-signatures are not preferred, I would find that helpful.

Like Dekkadeci, I'll note that the main body of the passage in question does not mention trumpets.

Why is it that key-signatures are 'irrelevant' to horn?

The tradition arose because natural horns always played as transposing instruments in the key of the piece; beginning in the late 18th or early 19th century, the transposition could change in the middle of a movement: if the piece moved to a new tonal area the horn would change to match, always being notated in C (for minor keys, the horn would be assigned a transposition to a closely related major key). The practice of not using key signatures follows from this fairly, ahem, naturally. Trumpets didn't change transposition as readily, and their parts are more likely to have key signatures, but if you search the internet for images you'll also find several of trumpets with sets of crooks.

If you look at older scores, you'll see notations like "muta in Sol" which means "change to G." Originally, this meant inserting an extra length of tubing, or removing one, to change the length of the horn. After valves became standard, the F transposition became standard, too, but the practice of not using key signatures remained.

I play trumpet and horn, and have played both in orchestras for many years.

Both instruments used to not be fully chromatic (mainly playing their overtones) and so they'd be crooked into the key of the piece (usually). Thus, the part is transposed to read in C and the parts always end up with no key signature (or rather, the key signature of C major).

Now, I don't have any proof of this, but I strongly suspect what happened is that somebody studied a bunch of music from the 19th century and earlier, saw that parts never have a key signature, and concluded that "trumpets and horns don't use key signatures", which misses the point entirely. But they published that in some orchestration book, and it gets passed down and not questioned.

And obviously I don't know every trumpeter and hornist in the world, but I've never personally encountered anyone who is either so siloed into orchestral playing that they never encounter key signatures, or is such a zealot for tradition that they get angry about a modern composer using them. So I don't know who these players are that Thomas Goss interacts with, but they sound like clowns to me. Or maybe they're just doodling because they're orchestral brass players and they don't play much and they're bored?

In short, I fully support ditching any tradition based on old crooked natural trumpets and horns. These instruments are now fully chromatic and should be treated the same as the rest of the orchestra. And I may just be one guy, but Thomas Goss is also just one guy, and I at least play the instruments. As a direct retort to:

I really want consistency, and saying that key signatures are somehow "irrelevant" to horn makes no sense whatsoever.

It's quite possible that those concert horn players are following an earlier music tradition where French horn parts were consistently not notated with key signatures, regardless of the home key of the piece.

Implying such a music tradition exists, the Boosey & Hawkes-published scores of Edward Elgar's Pomp and Circumstance Marches No. 1-4, which were all published in the early 1900s, all have no key signature for the horn parts throughout, regardless of the marches' home keys and key changes. (You can check these scores on IMSLP. Interestingly, the horn parts of Pomp and Circumstance March No. 5, which was first published in 1930 and should enter the public domain in the USA in 2026, do have key signatures.)

Yes, historically valveless horns and trumpets were built (or adapted with interchangeable slides) in different keys, but always written 'in C'.

A modern orchestral horn player will still get given parts for 'Horn in D', 'Horn in Eb' etc etc. and will transpose them on the fly for his modern 'Horn in F'. Which will probably be a 'Double horn in F/Bb'. Unless they follow the increasing modern practice of using replicas of the original instruments... Have I made the point that a modern hornist's life involves a LOT of transposition? Trumpet players also use instruments in Bb, C, D, Eb (and more) to play parts in various keys.

Do these facts excuse a seemingly perverse insistence on no key signatures? Perhaps. Or maybe they just enjoy being special! Anyway, it's only a symphony thing. Horns and trumpets cope with key signatures perfectly well in band, commercial and theatre music.

There's a similar thing with harp players. In traditional technique, harp is played with four fingers of each hand. No thumbs. {Whoops! Correction - no 5th finger. But the point stands.) But while today's players of every other instrument delight in 'alternative' techniques, ask a harpist to pluck a string with their thumb and you'll hit a brick wall.

Not the answer you're looking for? Browse other questions tagged sheet-music key-signatures trumpet orchestration french-horn or ask your own question.