Here is the starting part of Schumann posthumous variation V, 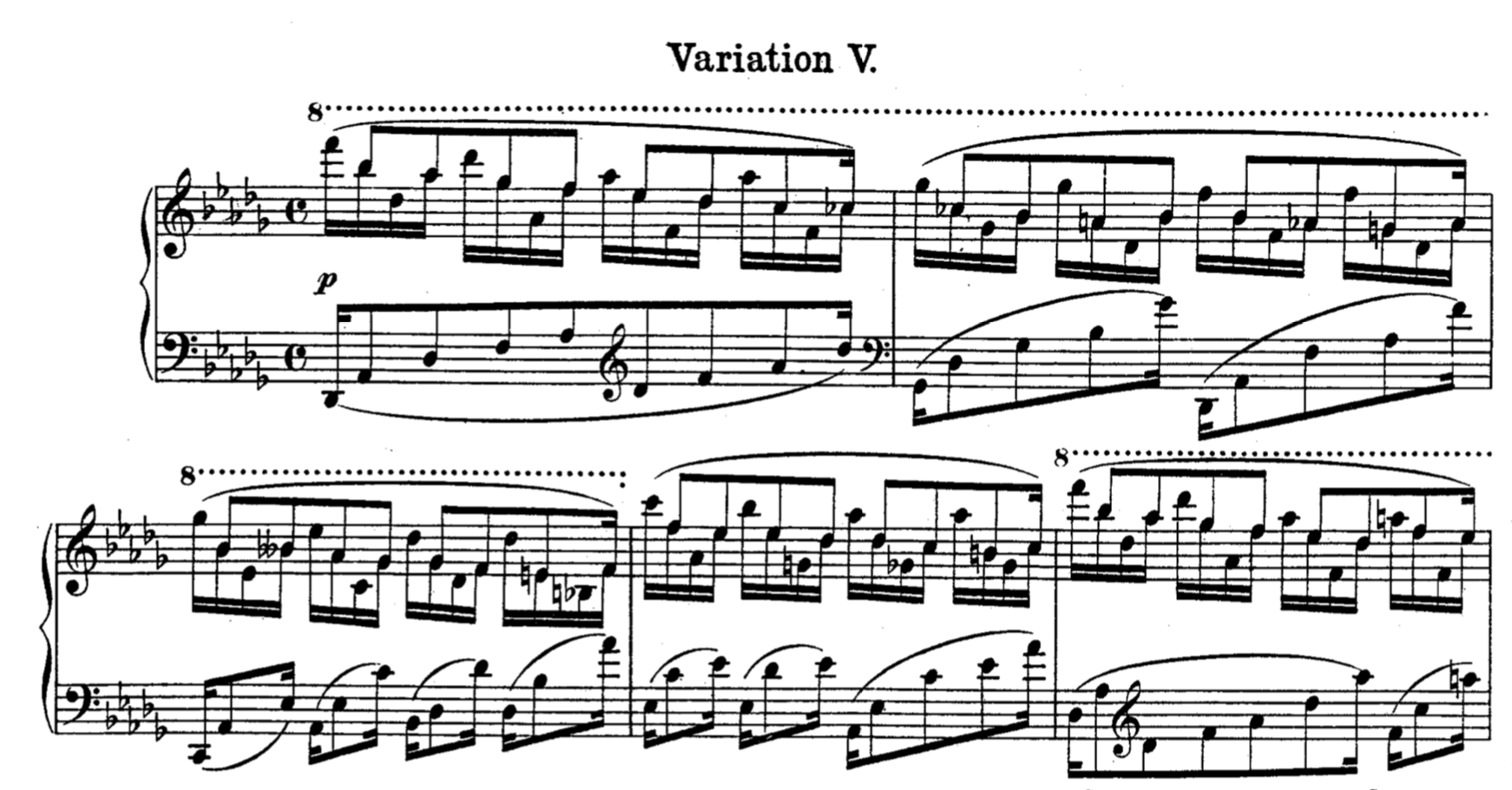 I am interested in knowing the "logic" or the "reasoning" why and how Schumann chose the descending tones of the following middle melody (marked in blue and green): 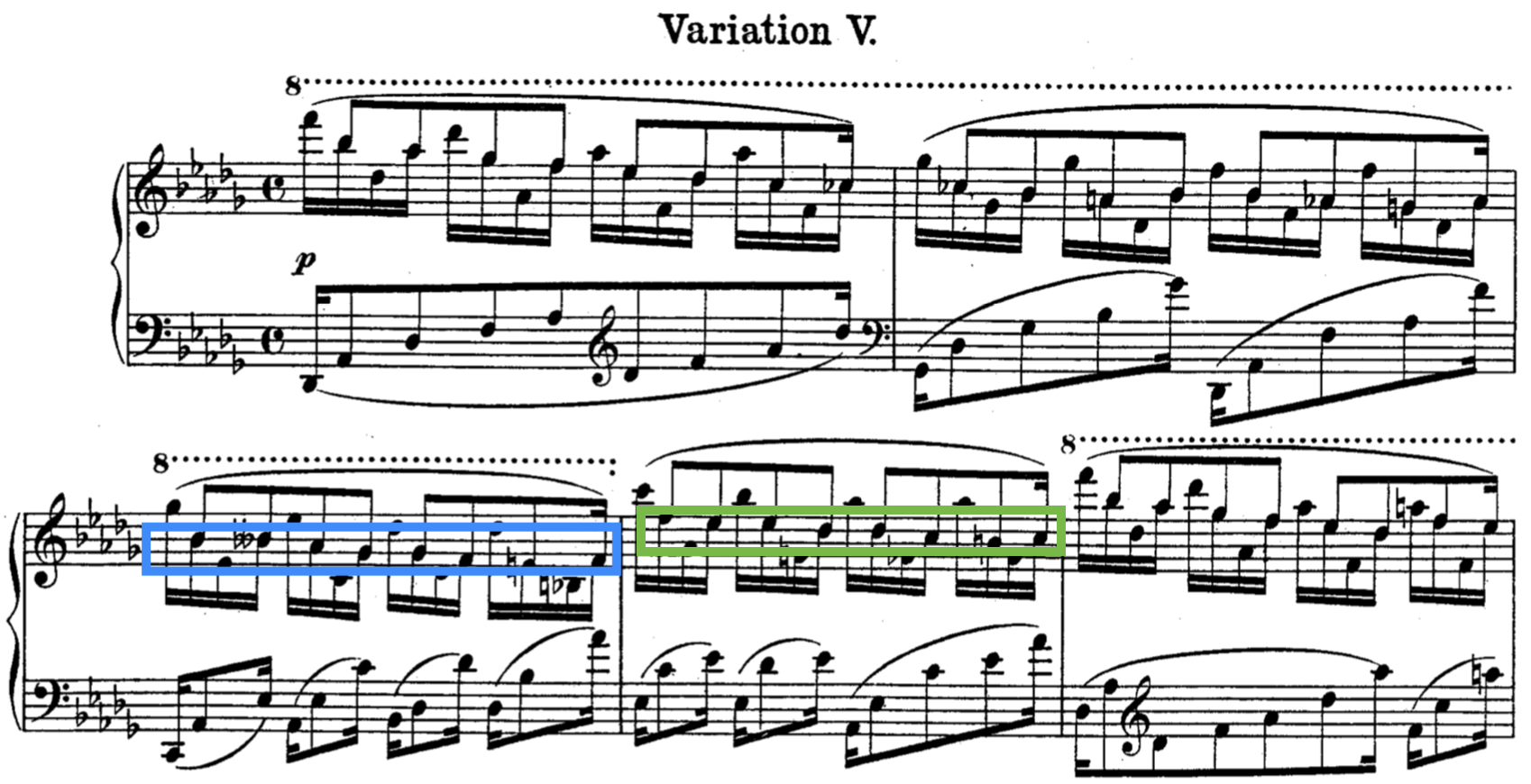 What the middle melody shows in the blue color has:

What the middle melody shows in the green color has:

My question is, for the purpose of making a more symmetric and perhaps also mystic sound, why not Schumann chose in the middle melody shows in the green color as:

Both the above and below explanations are summarized in the below graphic. 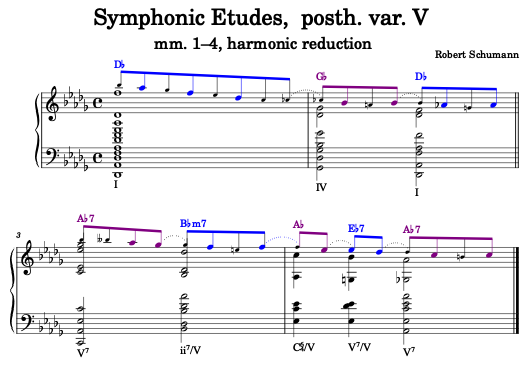 The question boils down to why, on measure 4's second melodic note, did Schumann write an Eb rather than an Fb?

Built into this question is the tacit assumption that the important element is the interval between the first and second pitches in each measure. (Measure three begins with a half step. Why doesn't measure four?) However, the problem is best answered by reframing the question as why did Schumann not immediately precede measure 4's third melodic note with a note a step above?

Beginning in measure 1, consider each sequence of four melodic pitches, with particular attention to the second and third of each group (in bold).

It's clear that in all but one case, there is a descending step from the second to third pitch. However, this reveals the presence of two intervallic outliers: the measure 4 unison already in question, but also the measure 1 descending whole step. So now the question becomes why are two intervallic relationships different from all the others?

Next, consider the harmonic structure of the first four measures:

All harmonies last two beats except the first measure and the first two beats of the fourth measure — corresponding exactly to the two intervallic outliers. Nearly the entire first measure is devoted to a descending scale (Db major/Bb minor) over a single harmony (Db major), and the melodic notes stick to that scale; thus, the descending whole step. However, nearly every time there is a chord change, Schumann ends the first chord and begins the second with a unison melody note.

The "nearly" points up another seeming anomaly: why do the chord transitions all involve unison melody notes except from measure 2 into measure 3?

This is due to the internal structure of the phrase, shown above. Measure 2 is the end of one motivic segment, and Measure 3 is the beginning of a new motivic segment. This is evidenced, in fact, by the ascending step between the two measures, which returns the music in m. 3 to the same pitch(-class) as started the first measure (Bb).

Not the answer you're looking for? Browse other questions tagged harmony analysis melody or ask your own question.

1
Augmented triad in Pathetique Sonata? How does it function?
3
Why harmonize non-diatonic notes with major 3rds above, in a "minor key" context?
1
Is this a deceptive cadence?
4
In major keys, since the 7th scale degree resolves up to the 8th, does descending through the scale degrees 8-7-6 violate the leading tone rule?
4
On Schumann posthumous variation V's note on a natural G or a flat G