Should I use 16th notes or triplets in swing rhythm?

I understand that in swing time, a pair of quavers should be played with a ratio of roughly 2-1 (up to 3-1), making it sound like a crotchet followed by a quaver.

Are 16th notes even played in this way in swing time? 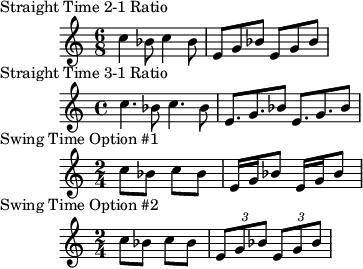 Edit: To make clear, the straight time are to illustrate the desired rhythm, I am choosing between Swing Time Option #1 & #2.

What you named "Swing time option 2" is the standard notation of swinged eight notes and triplets used in jazz scores. See e.g. this example of Dizzy Gillispie's Night in Tunisia:

Note that the word "swing" is not even written in the score, as it is left to the musician's taste whether and how deeply swing the eight notes.

Edit: It was pointed out in the comments that Night in Tunisia was composed in straight feel, and while some notable musicians performed it in swing feel, I tried to add some less controversial examples.

The triplets are played as triplets, the eight-notes are swinged.

Sixteen notes appear rarely in lead sheets, more often in solo transcriptions, but I found this example of Armageddon by Wayne Shorter:

However in this example from Charlie Parker's Billie's Bounce:

The group is meant to be swinged, i.e. the sixteen-note triplet should take time of the first swinged eight note. The resulting rhythm might not be easy to notate explicitly but at high tempo of the tune the swing will be rather shallow and the whole sequence can be played as an ornament, following intuition.

And for completeness All of Me by Gerald Marks and Seymour Simons:

Quarter-note triples are to be performed as written.

I'd like to point out that rhythm in various jazz performances often vary significantly, and is modified by the musicians. The widely circulated scores in turn are often not written not by composers, but transcribed from some particular recordings. Therefore one can certainly find performances which don't match examples I provided, and also different versions of the scores.

This question veers into "Opinion-based" land, I fear. My gut response goes something like:

For the paired eighth notes: If you write straight eighths but mark the music "In Swing Rhythm," Then the performers will know what to do and can adjust the magnitude of the swing (not necessarily an exact triplet).

But if you write quarter + eighth triplets, the music will sort-of swing but be viewed as calling for a more strict rhythm.

For the triplets: What you've notated produces radically different timings, so I can't tell which one you want. "Straight time 2" has longer 1st and 2nd notes while "swing time 1" has much shorter 1st and 2nd notes than the third one. FWIW, I would probably swing those triplets as (roughly) [nontriplet] sixteenth - eighth - sixteenth pattern. Or alternatively as [triplet] dotted eighth - sixteenth - eighth.

It depends on what you want. In both of your 'swing' examples, players will attempt to play the second bar more or less as written.
More generally, swing usually only applies to eighth notes. Sixteenth and triplets are played as written.

'Swing time #2' seems what you're trying to achieve. For the sake of argument, swing is roughly triplets, so the two quavers in bar 1 will behave like crotchet/quaver triplets, due to the legend 'swing', while the second bar will all be triplets, following exactly the same rhythmic pattern - be-it gentle or hard swing.If in fact you wanted exact triplets as your swing feel, 6/8 is easy to both write and read.

Having said that, it's not crystal clear which rhythm you're actually after - understandable - so would any answer be correct?

In the swing music I've heard that use 8th-note swing, 16th notes were always played exactly, in straight time. This means that the 16th-16th-8th patterns in the second measure of your "Swing Time Option #1" will be played exactly.

With that being said, as far as I've heard, triplets in swing time are also played exactly. I'm afraid there's no music notation for what you really want: the first 8th note in an 8th-note swing pair being divided cleanly into two, regardless of the swing interpretation.

"Swing rhythm" indications near universally apply to eighth notes. In order to get the rhythm you want, in which the first two notes represent the first (longer) swing eighth, and the third note is the second (shorter) swing eighth, it should be written as sixteenth-eighth-sixteenth. That will be understood by jazz players and executed the way you want.

Not the answer you're looking for? Browse other questions tagged notation swing or ask your own question.

5
Swing feel - are triplets and 8th note notations rhythmically the same?
6
Handling of dotted eighth rests when a "swing rule" is in place, and whether physical note position has effect on it
2
Note groupings and readability in unusual time signatures
3
How to play eighths (quavers) interspersed only with quarter notes (crotchets) in swing time
7
How to clearly notate tuplets, both "simple" and "complex," in irregular meters
3
How to describe occasional non-swing eighth notes using swing notation?
4
Why’s there a rest over this note in “The Easy Winners” by Joplin?
2
Swing rhythm vs straight rhythm
6
What are dotted quaver beats in 12/8 time?
0
Swing in eight notes vs triplets