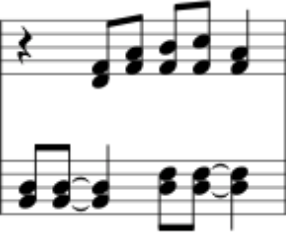 The first excerpt is in B minor, and the second is in G minor. 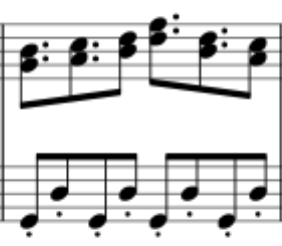 Fingerings for the posted examples

Now, there nothing wrong with that as far as it goes, but I don't like the stretch it requires of my fingers 4 and 5 to play the D-F# pair.

The easiest option was to make each three-chord grouping separate. That made the first group easy. Since each pair just moves up by step, I can use consecutive fingers:

The second grouping relies on a common piano convention. If you have four consecutive thirds, use 1-2 for one of them. Thus, four descending thirds would be fingered:

In this case, the right hand happens to "skip" what would otherwise be the 4-2 pair, but the overall strategy still is familiar to my hand.

Principles without regard to interval

Essentially, these follow the same principles as consecutive thirds. The difference is the possibility of repeating the thumb more often. For example, four consecutive fourths might be played:

And then the sorts of crossover tricks described above can also come into play.

When legato is a necessity, an exceptionally helpful technique is to play a note with one finger, then immediately swap that finger for another, freeing up the previous finger for future use.

As an example of this technique, here is one way to play a right-hand D major scale in sixths (remember that the upper note is the key to legato):

You could also do the piano equivalent of downstroke djent by using the thumb on every note:

'I have absolutely no idea how to finger things like this'. Trouble is, 'things like this' will be different for each and every piece. An answer will really only be appropriate for 'this' excerpt.

Generally, we finger notes in the way we find is best/most effective. That means attempting to keep our available fingers encompassing as many of the notes needed to be played as possible. Changing hand positions when necessary, by using the thumb as a pivot, or wholesale moving of arm/wristhand, thus fingers.