In this simplified Chopin's Prelude Op. 28 No. 20, the sustain pedal connects notes belonging to two separate slurs in the first and second measures.

Should the sustain pedal be left off for a moment before the following slur to "separate" the two phrases instead? 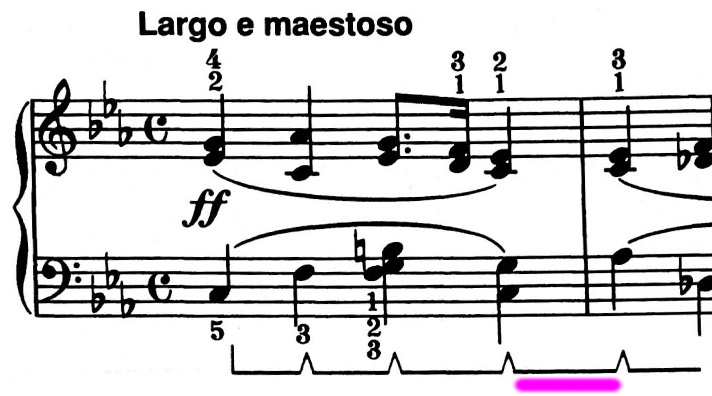 EDIT: Highlighted in the picture the part of the pedal section interested by the question.

Ultimately, this is a musical decision, so either way is fine. However,...

If you want to play the music literally as written, then you would hold the pedal through, so that there's no break between the two slurred passages.

My personal preference, both in this simplified arrangement as well as the original, is to leave a small break — a "breath" — to separate the two.

The answers by LaurencePayne and JohnChernoff prompted a look at some various editions (IMSLP). The first edition, complete works, Mikuli, and Debussy editions give no pedal indications; however, the Cortot edition gives the same pedaling as in the OP arrangement: pedal across the two slurred segments.

The usual way is to hold the pedal down to sustain one chord, then play the next, and after that next has been played, change pedal. Rather like the sign shows - the 'pedal up/down' comes directly after the next chord is played, not before or as it's played. Slowing it all down a lot will allow understanding of the actual timing - it's an aquired art !

By cancelling that pedal before playing the next chord, there will be a slight gap in the sound.Which really isn't what this kind of pedalling is about.

Holding the pedal down for a whole bar here is not a good idea - the different harmonies will bleed into each other, making everything sound muddy and confused. Hence the pedal sign for each chord.

Half pedalling would be an option, but here, with 'ff' shown, extra volume would be afforded by using full pedalling.

EDIT: - just realised OP thinks the pedal actually stays down for the whole phrase! Then changes and is down for all of the next phrase. No! That's NOT what the (simplified?) dots say.They say, as earlier in my answer, to re-pedal every chord. Note the arrow heads in the pedal markings.

Up-down as each chord is played. A subtle lift at the end of each phrase is not a ridiculous idea, but I don't think it's needed here.

Rubinstein legato-pedals through. So do all the other YouTube versions I just looked at. That's good enough for me.

Deliberately changing pedal before a new phrase can sometimes result in something not entirely dissimilar to when a choir collectively breathes before a barline - e.g., it can easily create a somewhat stilted/mechanical effect. I'd guess the written pedal marks are an attempt (presumably by an editor and not Chopin) to avoid that to some degree, though my own experience has been that following any non-overarching (i.e., several per measure) pedal markings too slavishly can easily cause that sort of thing regardless of intent.

My suggestion is therefore to note the reason for the marking and follow it as is natural for your own performance/interpretation.

Not the answer you're looking for? Browse other questions tagged piano keyboard-pedals sustain slurs phrasing or ask your own question.

9
When to let go of the sustain pedal?
17
How to play same note legato?
3
Is a sustain pedal the same as a sustainer pedal?
4
Two rests and a note that isn't played? misunderstanding ties
7
Understanding and distinguishing piano slurs and phrases
2
Can I use the middle piano pedal to sustain a repetitive melody line?
2
Sustain Pedal in Jazz
2
Piano sustain pedal
4
What does tying an acciaccatura to the principal note with a slur imply?
2
How do I turn on sustain on Casio CT-X9000IN keyboard without a sustain pedal?