Swing in eight notes vs triplets

I am trying to learn jazz and still can't find a solid answer to the swing in eighth notes. I understand swing follows the "long-short" pattern (quarter-eighth), but since triplets have a third division, does the same thing apply? For example, with a triplet it would be "long-short-long" pattern, or are they just played straight?

For example in the song "Livery Stable Blues", how do you play this three-eighth-note figure?

Will it be a "long-short-long" fashion or just three straight eights? Is there such thing as swing with eighth note triplets?

Here is the whole page. It came free (via eMedia Piano software) from Guitar Center when I purchased my keyboard. The triplet is in the pickup measure. I was just curious if these are always played straight or with the swing long-short pattern. 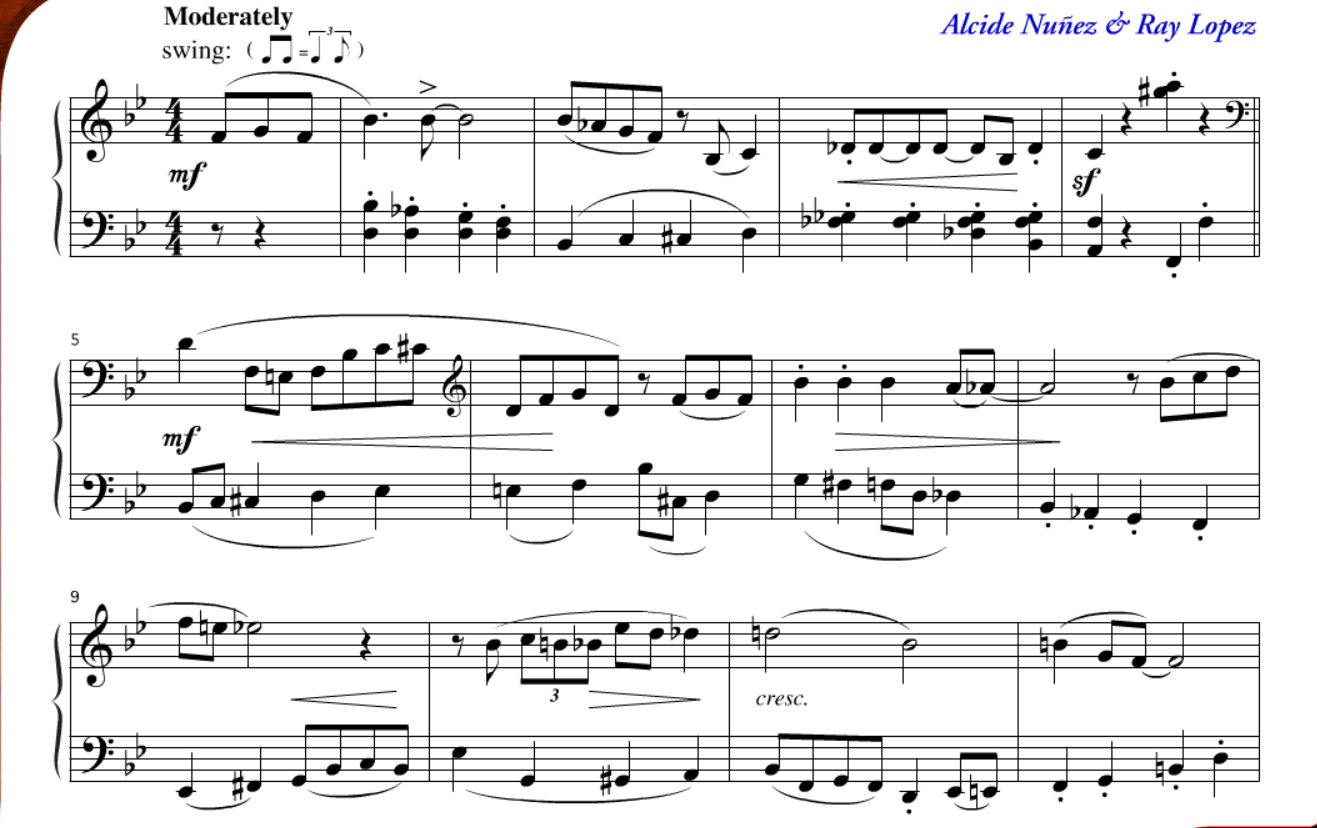 An 8th triplet among swung 8ths is played as a normal triplet.

But now you've shown us the piece:

The beaming in your example is very confusing. The 3-groups that are NOT triplets (i.e. most of them) should be beamed as a single note then a beamed pair. Otherwise they're far too easy to confuse with actual triplets.

For the sake of simplicity, swing is based on a triplet feel - as written in the legend at the top of a lot of music, as you did.

So in its basic form, two quavers would be long - short, and a written triplet would have three equally spaced notes.

Swing is basically that, but often gets morphed into hard or soft swing, meaning the two notes aren't exactly 66/33%, and could be 60/40%, for example. Any decent player would reflect that subtle difference when playing what's written as triplets, and probably not play 33/33/33% - it will depend on the piece, who's playing, and the tempo. but a great starting place will be as above.

Now that we have the full sheet music, the 8th rest-quarter rest in the lower staff of that pickup measure tells you all you need to know - that's not a triplet, it's three 8th notes. You therefore swing that as short-long-short (how the rests are spelled out in that measure is an enormous cue).

The triplet in Bar 10 is legitimately played as an 8th-note triplet, though, with no room to swing its notes at all. Those notes should all be played with equal lengths.

Not the answer you're looking for? Browse other questions tagged theory tuplet swing or ask your own question.

5
Swing feel - are triplets and 8th note notations rhythmically the same?
9
Is it recommended to practice sight reading by "feeling out the music" instead of counting
13
What is forward momentum?
3
How to play eighths (quavers) interspersed only with quarter notes (crotchets) in swing time
4
Writing interesting accompaniment rhythms
7
How to clearly notate tuplets, both "simple" and "complex," in irregular meters
8
How does 6/8 meter in jazz compare to eight-note swing in duple meter?
8
Metric Modulation: Length of 'swing' notes
10
How to interpret in swing a 16th triplet followed by an 1/8 note?
8
Should I use 16th notes or triplets in swing rhythm?