How would I notate this custom repeat scenario with sheet music?

I am composing a song, 8 measures in verse and 8 in chorus. I also have a 8 measure instrumental I would like to include after the second verse and before the second chorus. For the life of me I can't figure a way to make this work without just notating flat. Seems there should be some combination of D.S D.C or Coda, but I don't see it.

Basically, I would like to insert measures 20-27 after the second verse (measure 8) and return to measure 9 after the instrumental.

I hope that makes sense.

Any suggestions, or should I just flatten it? 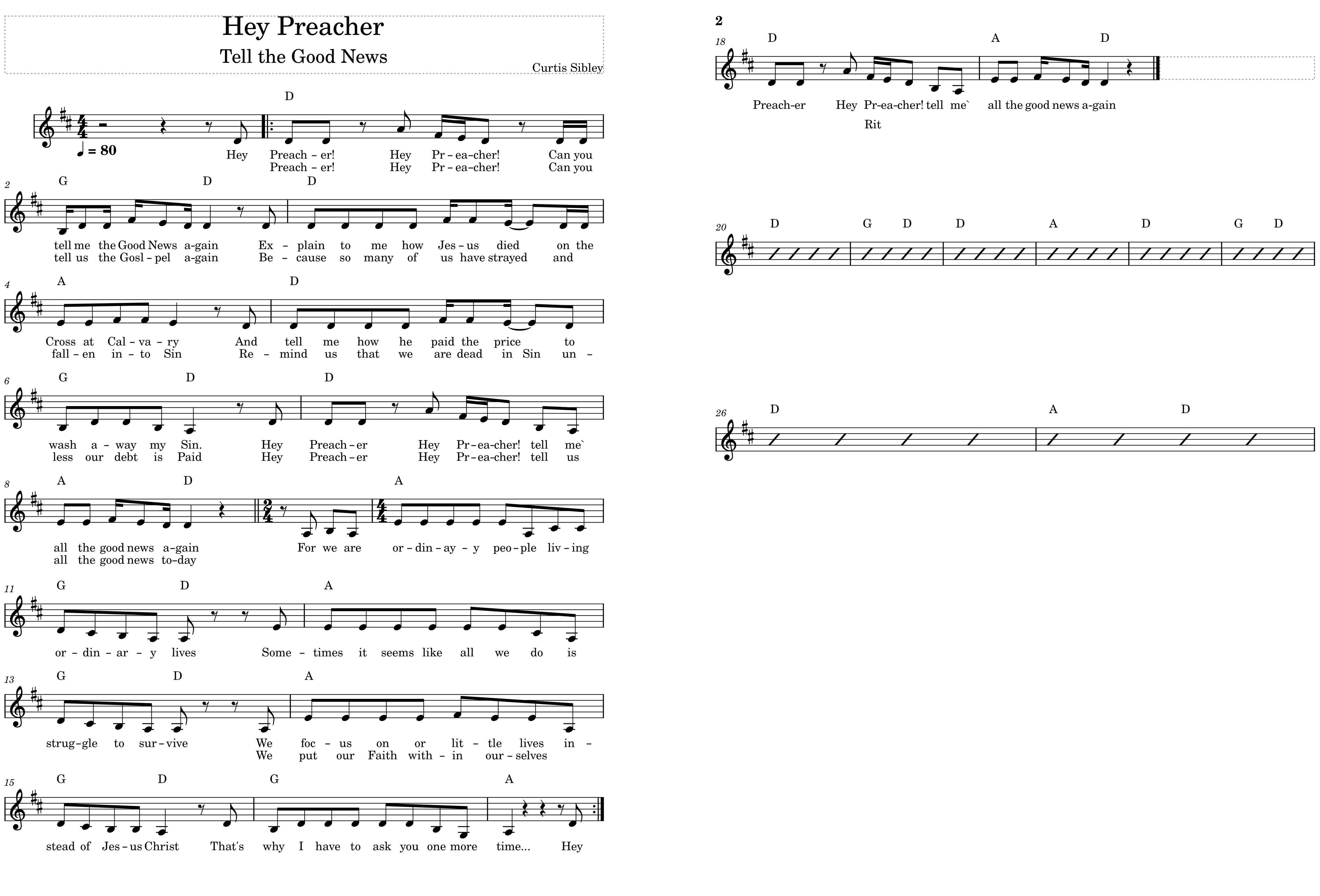 You can use DS, DSS, coda, double coda but why? The song as is is only 27 bars. Eliminating a road map would add 16 bars (an extra verse and chorus if I’m reading it right) and avoid any possible confusion of missed signs, repeats or repeat endings. Write it out from top to bottom, you’re better off, especially if others will be sight reading the song. Plus, it’s already computer generated, no elbow grease required.

If and only if codas, segnos, etc. were the only tools at one's disposal,

I would suggest D.C. al Coda ("Da Capo al Coda"; roughly "from the head (beginning) to the tail (ending)" in measure 17, which jumps the piece to the beginning. This could also be accomplished with "D.S. al Coda" instead if one places the segno symbol 𝄋 at the very first measure. Then additionally place a "to Coda" (or keeping with the Italian, "al Coda") in measure 8 and a coda symbol 𝄌 in measure 20. This will ensure that on the repeat, the music skips from the end of measure 8 to the start of the measure 20 coda. Remember that "D.C." always stands for "Da Capo", never "Da Coda".

In order to get back to measure 9 from the end of the instrumental coda section, many possible notation options can be utilized. One such option would be rewriting measures 9 through 19 out again after (as part of) the coda. However, if the song were to continue after this point, that could end up being a lot of recopying.

Keep in mind that the traditional usage of the term "coda" was for the coda to be a special ending segment to the piece, so this is not conventional implementation of the notation. Knowing this, I'm about to suggest something even more outlandish and impractical:

Hold onto your hats, because Multiple Codas is a hypothetical solution in the general case of complex repeats. This would involve changing the first "D.S. al Coda" into "D.S. al Coda 1" and the "to Coda" into "to Coda 1", then placing a segno symbol at measure 9, and finally at measure 27, the end of the first coda, adding the words "D.S. al Coda 2". After all of this, the reader is directed from the end of what is now coda 1 to jump into the segno symbol at the 9th measure to play the second chorus.

(If there has already been a segno mark used to get to the second verse from the first chorus, then number this segno as segno 2 in the same manner as the codas. It may be wise to spell out all abbreviations for clarity.)

The reader will now continue from there into the 19th measure for the first time: here, should the song hypothetically continue beyond measure 19, another marking must guide them to either a second coda or an additional segno. "To Coda 2" could take the reader out beyond the first coda section (past measure 27) into whatever new material is up next, or another "Dal Segno" could drop the poor reader off at a previous section for more repeats: if a third verse is required, write "D.S." at measure 19 and place another segno mark at the beginning of the third verse in measure 1. If the piece is to end at measure 19, change measure 27 to "D.S." and no further repeat markings will be necessary.

This process can be repeated indefinitely with sequentially numbered segnos and codas for any complex series of repeats and jumps. Whenever the music needs to skip backwards to an earlier measure, place a segno mark at the destination and use "D.S." at the outgoing measure. When the music needs to skip ahead to an upcoming measure, use "to Coda" at the point of departure, set up another coda marker at the point of arrival, and add "al Coda" to the previous "D.S." or "D.C." marking.

I do not at all recommend the notation system that I just laid out.

This is too convoluted to be optimal for most conceivable modern notation - it took me somewhere in the neighborhood of two hours to puzzle out and type up all of this madness and I still may have made some mistakes (I've already had to fix one). Using repeats like this, the reader will probably not appreciate the saved space; rather, they would in all likelihood be frustrated at the unnecessarily difficult repeat scheme. Musicians care about efficient use of space, but not at the expense of legibility! I have heard only rarely of the idea of multiple codas and might own one bit of contemporary sheet music that uses it - if memory serves -, but a quick search returned only a Musescore forum discussion where the main answerer strongly cautioned against the idea (good on them).

There may also be some stuff about double segnos and double codas somewhere out there, but I don't know enough about them to answer. Honestly, I think a modern musician could probably live their whole life without learning any of the "D.S. al Whatever" notation. It seems far too dated in the face of accepted modern sheet music practices, and it was optimized for composition forms that are no longer in contemporary style. But that's just me. For curiosity's sake, I'd love for someone to point me to some info on the double segno and the likes.

It would be far wiser to use the strategies given in the other answers to notate this piece; I simply decided to attempt a full answer detailing the difficulties of using only the Italian repeat notation schemes. Hopefully this answer serves as a strong argument to "get with the times" and use more modern repeat notation where appropriate (or simply bite the bullet and write it all out).

You can notate it this way: 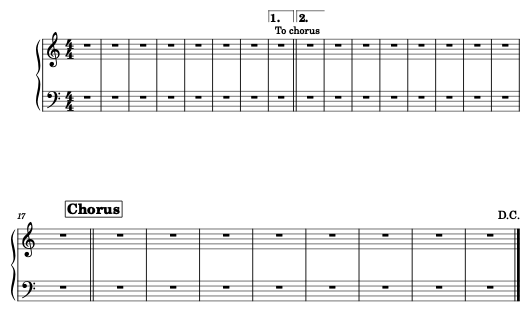 Easiest way I can think of is to simply treat your instrumental break as the third verse. You could simply add "instrumental" underneath the lyrics for the second verse. Unless I am mistaken, the chords are the same. This is a simple solution, and it shows to the musicians that the form of the solo break is identical to the verse.

Not the answer you're looking for? Browse other questions tagged notation sheet-music musical-forms coda or ask your own question.

1
Is there a way to notate alternative transitions between 2 sections of music?
5
Is it wrong to alter bar numbers after repeat endings so they reflect the performance progression rather than the last repeated measure +1?
5
How to notate popular/contemporary song structures?
0
Notating a melody over a free-flowing arpeggio
6
song form in pop/rock music
1
How does Sonata Form fit into a Waltz?
3
chorus construction in pop and rock
1
Making a lead sheet to practise transcription - have a few queries
4
Notes and Beat "slashes" in the same measure