Why does G# sound right when my melody is in C major?

I composed the following melody using notes from the C major scale. In the third bar a G# (Ab) seemed a natural choice to complete the loop, but I don’t understand why.

G# is not in C major nor its relative minor scale Am. It is one semitone down from A, so it seems to lead back to the Am scale naturally. What is the reason?

Edit : Here is the corrected cleaned up score 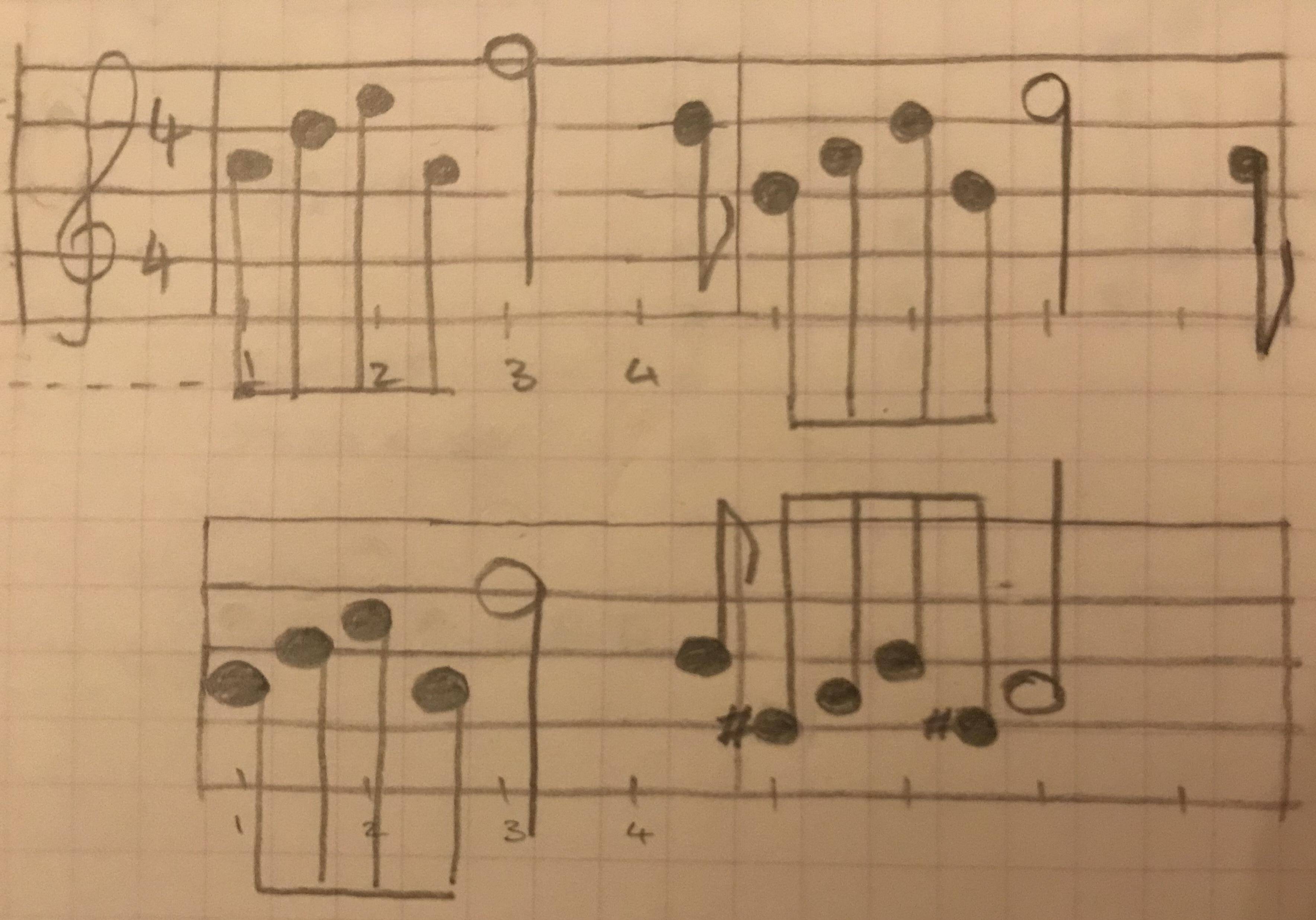 You might think, "Well, the first measure emphasizes C and E, which are both members of the C-major tonic triad." But they're also the third and fifth of A minor! So depending on the harmonic accompaniment you create, your melody may be in A minor the whole time.

The G♯ is the leading tone of A minor; it's what helps clarify A as tonic, whereas the G♮ (what we call the "subtonic") lacks the same kind of pull upwards towards tonic. The use of a raised scale-degree 7 to create the leading tone is very common in minor keys.

Lastly, I'd recommend you doublecheck some of your rhythms. Your half notes in each measure technically create measures of nine eighth notes; these should probably be dotted-quarter notes instead.

You started in key C major, and you've modulated into key Am, its relative minor. True, there's no G♯ note in key C major, but key A minor has three slightly different incarnations, when written in scalar form, two of which actually do have that G♯.

Those notes just before the last note, A, all work with the chord E, which most times in music will lead to A. It's called the dominant of A, and sounds more convincing with that G♯ rather than G♮ to point the way to A. Play it with G♮, and it doesn't sound anywhere near as good, does it?

Don't be fooled, as so many are (and I was!) into believing a piece in a particular key will only contain notes from the scale of that key. true, pieces will be 'safer' when that happens, but can become quite banal. By using notes out of the key, colour is added. Thus those notes are called chromatic - funnily enough having a close connection to colour...

Although A minor does not natively include G#, it is common practice to use G#, because it is the leading tone in A minor (and major). That is, it "leads" the ear to A, just as you've described.

This idea is also discussed in When to deviate from scale?

Technically, what you've composed is called a sequence, a pattern of sounds that is repeated on different pitches. In this case, your pattern modulates (changes key) to A minor. So even though the song itself is in C major, it is visiting another key, which is just fine.

Sequences of the type in your composition are discussed in How are melodic sequences used?

I'm a newbie at this stuff but I'll take a crack at explaining why it sounds good to me. I think we can simplify the melody by reducing the n,n+1,n+2,n eighth notes (like C D E C) patterns to the first note n and removing the trailing eighth notes; brief or unrepeated notes make less of an impression. So then we're left with C F|B E|A D|G# A. We can break this down into adjacent pairs to look at harmony and dissonance:

So the adjacent pairs were seesawing back and forth between dissonance and harmony.

You could have made this more of a C scale if you had continued the pattern C F|B E|A D|G C, but play it out and it feels like it's too quick and less interesting without the G# dissonance and the resolution.

Quick, general answer: Because chromatic notes and chords are a thing. A very commonly-used thing. You don't have to stay in the scale.

Longer answer, more specific to this instance: You have fallen into the trap of assuming that the 'Natural minor' scale is the ONLY form of minor scale.

Until quite recently, standard teaching was that the Harmonic minor scale was the norm, sometimes modified into the Melodic minor. But they both used the sharpened leading note when ascending, which enabled a major dominant chord, a central feature of Common Practice harmony. (If Harmonic minor, Melodic minor mean nothing to you, there are plenty of online resources for basic theory, I won't try to spell it all out here.) In fact, when trying to determine whether a piece had strayed into the relative minor key, the rule of thumb was 'spot the sharpened 7th'. When a piece that starts in C major starts getting G sharps, that's a pretty good clue that we might be visiting A minor.

The Natural minor scale, with its flat 7th note, was a poor relation, mostly found in folk music. Natural, with its modal flat 7ths and lack of proper dominant chords only suited folk songs. Don't get annoyed, but there's a certain truth in that. A musical form longer than a simple song ("all you can do with a folk song is play it again, louder") will probably use different keys as a structural device. And you get to new keys through dominant-tonic relationships.

This is more natural than having e a in the end, which would not have nearly as strong of a gravity towards the final note. You can also try A d | E a (i.e. using c# in bar 3), it will get yet a different feel, and whoa, you'll use c# in a piece in C major / a minor!

The bit is actually we well thought out -- not sure if it's an intention or a coincidece, the piece is just an ornamentation of c f | b e | a d | g# a, so bar 1 doesn't have a leading note, meaning the resolution of C > F is not as strong as in bar 2 where a third is used (b), but it's not properly resolved to a tonic (it should be resolved to c not e). Then the second part is the same motif, just in the parallel tonality and properly resolved to the tonic. Very cool!

Also, while bars 1 and 3 don't have as strong of a lead, they still contain the third of the dominant in the ornamentation, giving quite a hint!

Not the answer you're looking for? Browse other questions tagged theory harmony sheet-music composition key or ask your own question.

5
When to deviate from scale?
2
How are melodic sequences used?

54
The major scale - why and how?
9
How to determine what key changes are appropriate?
2
How can different compositions use C Major?
3
Question about the key of Bob Marley's "Three Little Birds"
4
How do you think of the natural minor scale (or any non-major scale), when you play it?
2
How to get a more major sound without going directly to major?
3
Are these upper voices in this final passage from Handel a bona fide F7 chord or some kind of non-chord tones?
3
Why harmonize non-diatonic notes with major 3rds above, in a "minor key" context?
12
Melody using a different scale than the bassline - what is it called?