Is there a mistake in this four-part composition

In the screenshot provided you'll find 2 times 8 bars of a four-part composition etude. I was given the bass and soprano and am supposed to fill in the middle registers according to some basic harmonic principles.

The principles to acknowledge are: Avoid parallels of fifths and octaves, Shortest path principle and linearity.

The first 8 bars contain my solution, the second two bars contain the solution provided by the book's author.

I wonder wether there are just multiple valid solutions to this problem, or wether I just don't see my mistake. Especially: What's the clue that would keep me from repeating the f in the fourth and fifth bars of the alto register.

Thanks very much in advance! 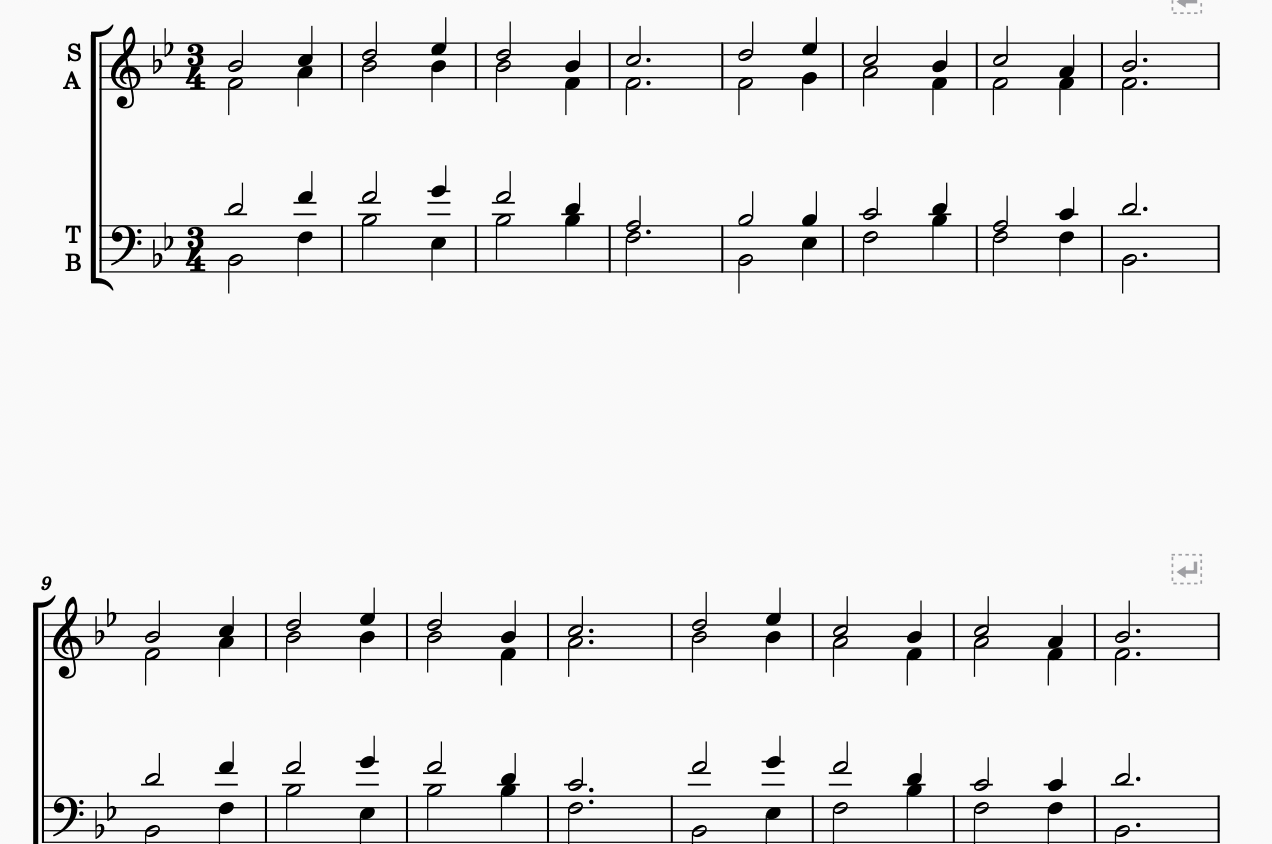 You have parallel 5ths between B and T, last beat of bar 5, first of bar 6.

Repeated notes are sometimes a fact of life for altos! But if you want to avoid them, the book solution shows one way.

The tenor line is rather high in both versions. Tenors should be OK on a G, but don't keep them there all day!

Avoid parallels of fifths and octaves, [follow the] Shortest path principle and linearity.

Notice how the tenor voice in measure 4 leaps down from D4 to A3? This is where your version gets funky. That is probably the "clue" that you didn't see. The more natural solution, which the book's author gives, is to have the tenor go from D4 to C4 and make the alto move up with the soprano from the F4 to an A4.

There are many ways to learn and teach species counterpoint, so I will not attempt to dissect the guidelines present in this question. However, most would consider the student version with the tenor leap to be a stylistic error, generally placed in the broad category of "crossed voices". The issue is that the tenor sings a note that is below the bass note of the previous chord; many schools of four-part writing hold this to be a mistake. In essence,

Anything beyond the previous note is fair game, though, so for example the highest note of the tenor part may be above the lowest note of the alto part so long as they are separated in time.

Bonus points: the reason that this is considered a "rule" in many pedagogical environments is that crossed parts detract from the independence of the voices, which is kind of the whole point of this composition style. In fact, most contrapuntal rules were devised specifically to preserve the polyphonic texture. If one voice jumps above the other, it becomes very difficult to track the individual melodies.

Another bonus: These "rules" weren't created until well after this style had fallen out of favour (if memory serves), as they were intended to help later composers achieve this style. Bach certainly didn't care about any parallel fifths rule, but he probably cared a great deal about vocal independence, and it so happens that avoiding parallel octaves and fifths like the plague is a good way to sound like his music!

Not the answer you're looking for? Browse other questions tagged harmony voice-leading or ask your own question.

4
Are repeated octaves permissable in four-part SATB?
5
Omitting the 5th in four part counterpoint
3
In Four Part Writing, is an augmented unison interval in a single voice allowed?
1
Harmony - four part vocal style and pianoforte style
3
Is there any rule I violated in my 4-part harmony exercise?
1
is this a part interrupt?
12
Doubling the third of a root position major chord in four-part harmony
1
What is "Four Part" Harmony?
1
Why is this jump allowed in four-division time strict part-writing?