notation for different versions of melody

I have a simple song for which I know two melodies to play. They are not played simultaneously - one has to choose between one of them.

What is the common/standard notation for that?

As far as I know, a piece of music where two melodies are played simultaneously (by different instruments) is written like this:

So how would it look like (in standard notation) if the two melodies are alternatives, not both part of the music?

And if both melodies have a name (e.g. "Foo's version" and "Bar's version" named after the two componists Foo and Bar), where would these names be written?

Given the brevity of the melody and the fact that there are no other parts involved, the best way to write it would be as though it were two different songs. That affords the greatest visual clarity and eliminates any uncertainty over whether there are two parts to be sung together or perhaps a main melody and a secondary melody (as opposed to two equal options). 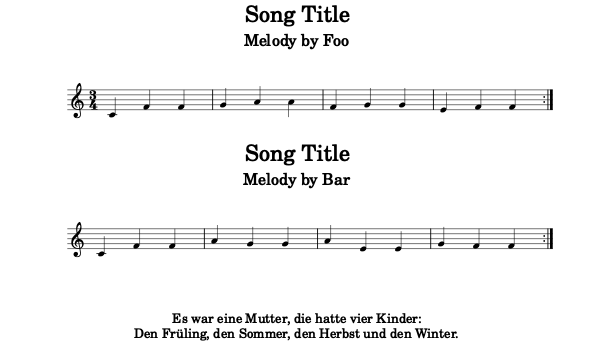 Whether the lyrics are included separately from the notes as in the above example or included with each melody is according to taste.

When just an occasional note is different, a bracketed cue-sized note may be sufficient (example A). In your case, however, I think there are enough differences to warrant an ossia stave (example B). Maybe even a full-sized one, if the two versions are of equal status.

Either way, some explanatory text would be in order, to make it clear that the ossia is an alternative, not to be simultaneously performed! 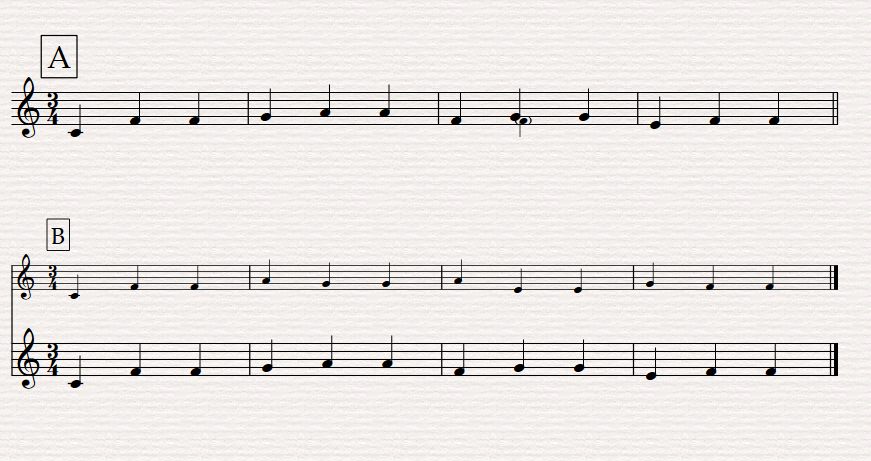 Apart that this song has an up-beat and needs 1 flat it has to be written in 2 versions, because the accompaniment will be different:

So you can notate the lyrics with one tune and add the second tune as supplement with the remark that it can be played or sung alternately to the first version.

13
Should I learn to read standard notation?
5
Standard notation for an octave
7
Music notation software for JianPu and erhu notation
1
Naming of notes in choral music?
5
How to transcribe Indian classical music using Western music notation?
2
Piano - What is the notation for two notes played simultaneously, where both notes are different lengths?
11
Notation for a unison double stop
2
two alternatives for one song in a bookpart
6
What does "plagal" actually mean for modal music and melody generally
6
What's the (italian or classical) name of a single slash repeat?