What is this curve going upwards to a note that's also detached from the previous note? [duplicate]

In Cedric Dent's "He's Got The Whole World In His Hands, this symbol appears attached to the note on "-ands." From first glance, it seems like a poorly drawn legato, but there is a perfectly good one at the note just before it, so what is this thing called, and how should I go about singing it? (Right now I'm singing ha-, holding my air, and then letting it out on -ands almost as a separate word) I tried searching for posts and articles related to "curve going upwards to next note" and "detached legato" and also "musical symbols" and "cut-off ties" but I can't seem to find this anywhere else. 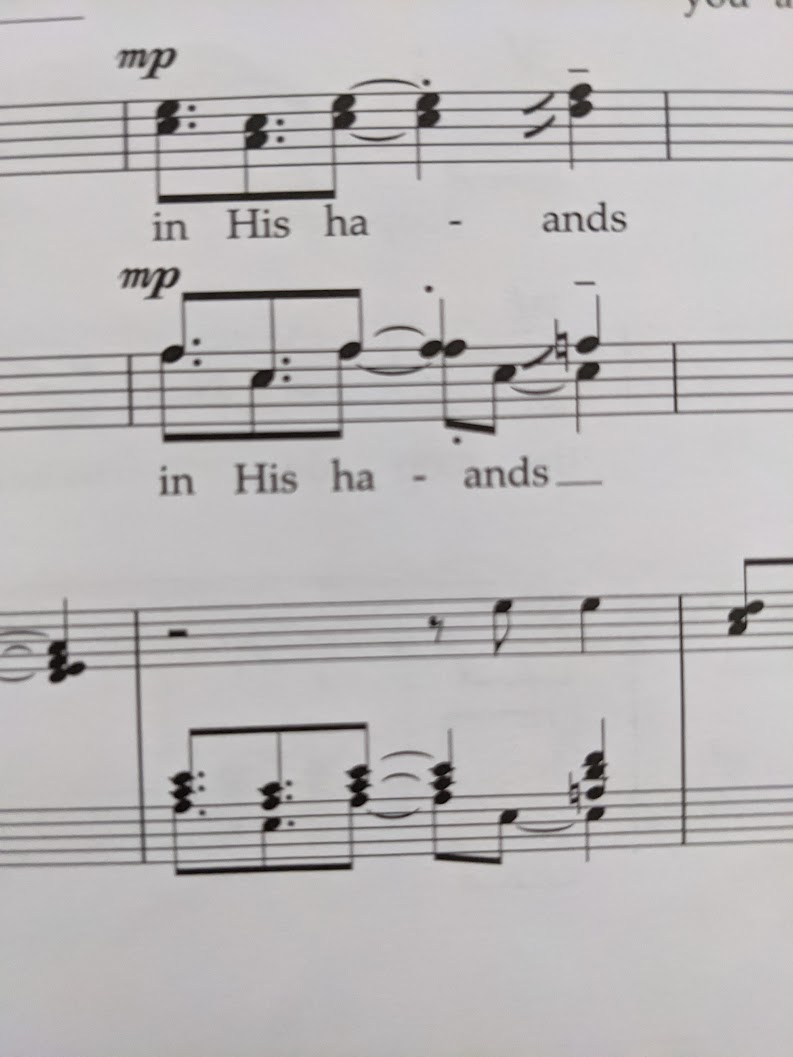 This is the sign for a ‘scoop’, indicating that you start singing a little lower than the target pitch (perhaps a semitone or two), and slide/‘reach’ up to it.

In this case, all three affected parts will probably start around the same pitch as their previous note (which makes the tenor notation confusing, because it looks like it's sliding up from the bass note!). However, that's just a coincidence; in general, the start pitch doesn't depend on the previous note, which could be higher, or missing entirely (if the scoop occurs at the start of a phrase or even the whole song).

It doesn't necessarily affect the articulation; you can scoop a note in the middle of a phrase — which may involve an abrupt change of pitch at the start of the scoop, just as you would at the start of any other note. (That doesn't apply in this case, however, as the previous notes are staccato, giving a natural break before the scoop.)

It's a sort of vocal glissando. The word is sung, with the last part of it sliding up from the first to the second note's pitch. Can be done best with vox or instruments which can slide or bend notes - violin, guitar and trombone spring to mind. (Infinite pitching).

Like Tim says: this is a notation symbol for glissando applied for singers: let your voice glide like a Trombone:

10
Meaning of a Notation Symbol (
8
What are these diagonal dashes in the Schnabel Ed. Beethoven Sonatas?

7
What is this cross staff tied/slurred note supposed to be?
35
What does this note - B# - mean?
12
What does it mean when there are two 1s with a curve over a note?
14
What does this 'x' mean on the stem of the voice's note, above the notehead?
1
What does this number 3 next to the note mean?
6
What is the symbol above this note?
10
Does this accidental before an acciaccatura also apply to the main note?