Doubts about some harmonic passages in Bortkiewicz's prelude op. 40 n.3

I am trying to analyze the harmony in Bortkiewicz prelude, op. 40 n.3 in E major, but I have some doubts.

I put under the arpeggios the romanic numbers of the harmonies. In the first part, even if there are a lot of passing notes, the chords are quite clear but, from the 8th bar, I don’t understand the harmonies of this piece.

I think there is a modulation in A# (as I wrote in the first and second movements) and then in G-, even if there is no B flat. In the next bars I don’t understand the meaning of “B flat” and “E falt”. Is this a modulation in B flat major?

Moreover, from the 11th bar, there is a chromatic progression. How do you think it can be analyzed? 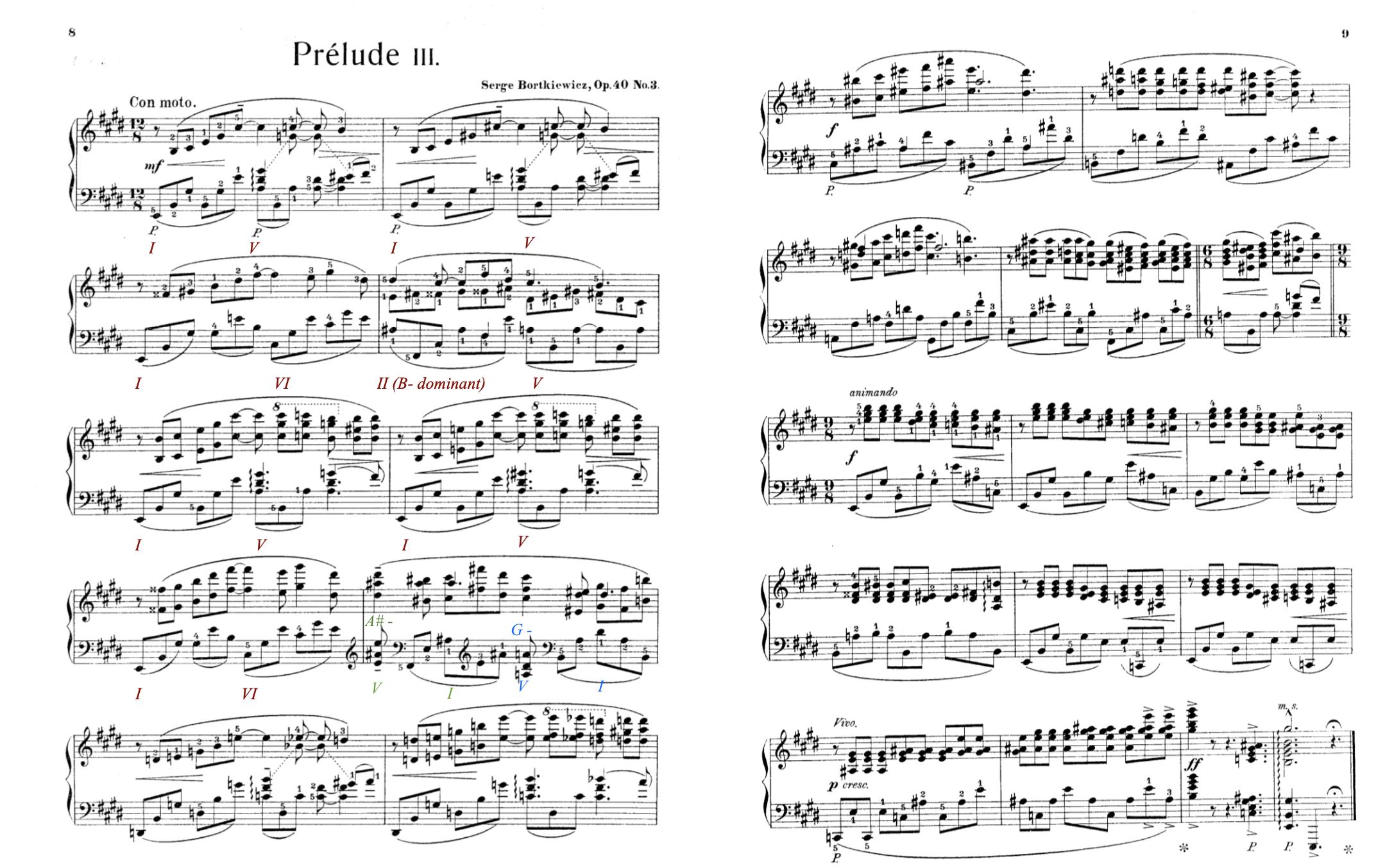 Bar 8 prepares Bar 9 pretty badly, though. It starts off with a "changing notes" figure in the right hand that obfuscates the left hand's vii°6/4-V7 of V (note that the right hand clashing harmonically with the left starts right in Bar 1 with the C♮-G♮ dyad and repeatedly reappears). The left hand goes viiø4/3-V7, this time in the home key of E major, in the second half of Bar 8, but is obfuscated again by the right hand's "changing notes" figure of E♯-G♯ in Beats 3 2/3 to 4. The best way I can describe the B7-G transition between Bars 8 and 9 is a chromatic mediant (with the B's of Beat 4 2/3 of Bar 8 as the shared pivot notes).

Bar 11 slams right back into several-sharp territory with a F♯-B♯ø7 chord progression. This looks like I-viiø7/V in F sharp major, but it looks like keeping the chromatic descent in the bass is more important than adhering to common practice period harmony here. The previous G major harmony can be interpreted as a long tonicization of the Neapolitan of F sharp major.

Bar 12 more clearly uses i-V6 of B minor, but obviously, the B♯ø7-Bm chord progression between Bars 11-12 is problematic and aims to preserve the chromatic descent in the bass over adhering to common practice period harmony.

Bars 14-15 use a fairly straightforward V7 of -> V(7) of -> V7 chord progression in E major, but this is obfuscated hard in the right hand, including nonchord tones in the first half of Bar 14 that provide resolution as maddeningly delayed as in Bar 19.

(Bars 16 and later, which are in E major, grow obsessed with I and a mystery chord with C♮, E, G♯, and A♯ that shares characteristics with ♮VI and V/V, with only Bar 19 breaking that up with a rough V7 with heavy chromaticism in the right hand, so I won't go into play-by-play detail there.)

The passage from measure 8–15 is a highly altered / disguised / chromatic version of the following progression in B major (with copious modal mixture):.

Seeming modulations to A# and G-: These are actually F#7 and B7.

Inexplicable Bb and Eb: These are chromatic passing tones over a D7 harmony. They function in exactly the same way as the G and C naturals in the piece's first measure.

Here's a literal breakdown of the chords involved from mm. 8–15.

So one way to analyze would be

This is fine as far as it goes, but it begs the question of the relationship between the key changes: E G Bm F#m/F#M B.

My feeling is that the most straightforward analysis of this highly chromatic, not-at-all-straightforward passage, is to look at it in the key of B major, with a healthy dose of modal mixture.

First, note that B is the dominant of E. At that level, it makes sense analytically as a main target of modulation. Furthermore, all of the various modulations make sense in B: G = bVI (from minor); Bm = parallel minor; F#m = v (from minor); F# = V. This analysis gives

This passage could also be explained in terms of (chromatic) mediant modulations, contrapuntal movement of voices, neo-Riemannian theory, and perhaps other methods. I've chosen this particular interpretation only because it's the one that best matches my own theory background.

1 As noted earlier, this measure serves as a pivot between E major and B major. The B7 chord, V7 in E major, although not strictly from B major, does serve as the "jumping off point" aurally for the change. In that regard, it can be viewed as a "surrogate" I chord.

Thus in measures 13–15 we have a disguised/altered version of the very conventional III → VI → II → V → I progression. (See note 1 regarding the use of B7 in place of B as the I chord.)

3 Here is the pivot back to E major, which returns in the next measure.

Not the answer you're looking for? Browse other questions tagged theory harmony chord-theory analysis or ask your own question.

10
Harmony and roman numeral analysis: how to deal with chromaticism?
4
Analyzing Hisaishi Joe's Song "Reprise"
2
Chord progression conveniency depending on the harmonic rhythm
7
Is this really better analyzed in G minor than in Bb?
4
Rootless chords in Beethoven sonata?
5
How should I analyze this passage? As vii°7, V7, or both?
2
Chromatic approaching dominant
6
Doubts about a diminished fourth - op. 40 Bortkiewicz
1
formal and harmonic analysis : Bortkiewicz op.40 n.4
13
Is this chord from Bach's C major Prelude G+ or Cm?