I had a discussion with a few people on Chopin's Nocturne in B-flat minor. We couldn't reach an agreement and I'm curious how people would analyze it.

In the middle section of the piece (which is in Db major), there are occasionally some short phrases that are in D major. And the topic of the argument is whether those D sections are modulations to D. Let's call the first measure from top measure 1. 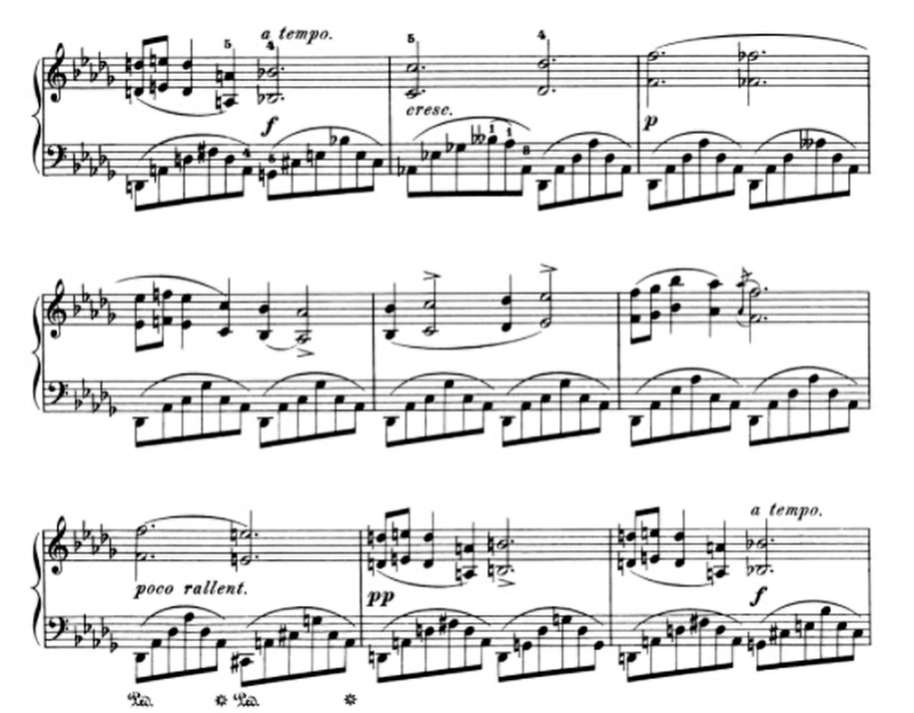 What we all agreed

What we didn't agree is whether m8 and m9 is a modulation to D.

So I would rather consider this a tonicization to D major, which is a non-diatonic chord on Db. That's what makes this part very interesting. I'd argue that Chopin simply wanted to play the same materials briefly in a foreign key (to bring some interesting colors) before it comes back again to the same materials - a satisfactory return like a tiny recap section in a sonata form. Since it's too short, and doesn't have brand new materials, I don't think this is a modulation.

Here's what they argued

I just wondered, did I miss anything in my analysis? I know that there are different theories and definitions so it's very natural to have different understandings of modulation and tonicization. But if it is used in textbooks and exams in Chopin's homeland, it probably means no ambiguity here.

What I was taught in my university (not a conservatory obviously), is that as a traditional composer in common practice period, one would clearly establish the key. A lack of clear intention on modulation, is NOT a modulation but rather a tonicization or something else. But here for this example, it would probably be a creative use of tonicization since it tonicizes on a chord that's not in Db major.

Thank you for the patience if you reach here and I'm curious about what people might think on this.

This is not only "allowed", but commonplace, especially by the time Chopin was composing. One of the compositional goals of Chopin and his contemporaries was to explore chromaticism, even to the point of hiding the actual key of the piece.

Is this a tonicization or a modulation?

I would call it a tonicization because of its brief duration and because there is not a complete phrase in the new key.

Is this specific "tonici-modulation" in the original key?

bII is a common enough occurrence to warrant its own Roman numeral designation. So is it "part of" the original key, or is it a foreign key? Either answer is acceptable, but I would suggest the presence of G major (or, Abb major) is a step too far to consider the music still to be in Db major, as it is "genuinely foreign" to that key — neither native to Db major nor available through modal mixture.

A secondary dominant creates a brief ’tonicization’. A more extended visit to a different tonality is labelled a ‘modulation’. There is a middle ground, in which we can argue between the two terms.

And does it really matter that much where we stop saying ‘V7 of IV’ and admit that there’s a new I? With the exception of a ‘Truck driver’ modulation - shifting up a key with no intention of returning - a change of tonic always relates to the original key. We’ve taken a journey, but home is still home. Maybe the journey leads somewhere we like well enough to build a house and linger for a while, maybe it’s just a hamlet we speed through without stopping. A matter of degree, not a fundamental difference.

And yes, a tonicization, a modulation, and anything between can be to any key, not just a diatonic one.

In romantic pieces, wherever you see diminished chords, you can expect to arrive at a new key-- possibly a tritone away.

So I'd expect D♭-G, rather than D♭-D. You might also reasonably expect to see a modulation to E or to B♭, as those are the other keys outlined by the same o7 chord.

Not the answer you're looking for? Browse other questions tagged classical-music analysis modulation chopin enharmonics or ask your own question.

4
"I-vi" in Major or "III-i" in Minor?
5
Can chords found in parallel modes of the relative minor of a key (or relative major when in a minor key) be considered borrowed chords?
1
Key modulation in a fugue, how to not lose sight of the tonic?
0
Relative minor key change in chord progression
9
Is parallel modulation a thing?
1
Using an augmented chord to modulate to a distant key, will this work?
3
What is the harmony of this bar from Chopin's Minute waltz?
9
Can the same song be written in a minor key and major key with the progression written differently?
1
Can we understand subdominant/dominant chord functions in terms of them being tonics of other keys?
1
Modulation Techniques in 'Sword Art Online - Swordland (Main Theme)'