I am trying to analyze a Bortkiewicz prelude, op. 40 n.4 in F# major, but I have some doubts.

I divided the prelude into three parts:

Moreover I don't understand the harmonies of the last part, the coda (bars 30-41). Do you think there are any modulations?

One last question: Is polyrhythm (used in part B) intended to accelerate the progress of musical discourse? 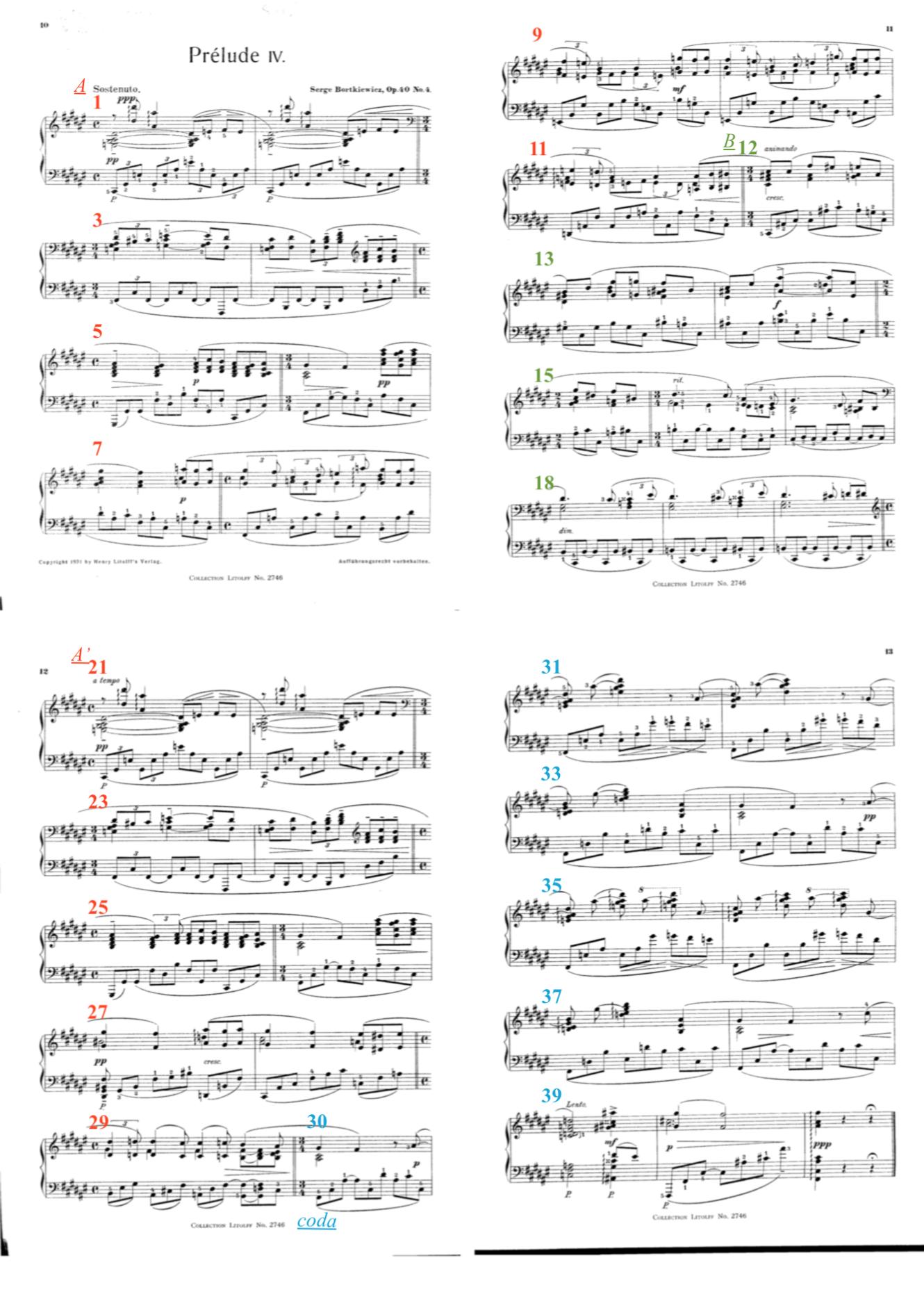 I'll get the shorter discussion point out of the way first: as far as I can interpret, the polyrhythm used in Part B is not intended to accelerate the progress of musical discourse. That 2-against-3 polyrhythm is already used in Bars 1-4 in Part A, so Part B merely takes that use further. In fact, right before Part B, there is an 8th-note triplet in the melody. The melody, in fact, slows down its note rate right when Part B starts instead of speeding it up because it now uses regular 8th notes instead of 8th-note triplets. It is the animando expression marking that does all the work of accelerating the progress of musical discourse there - given the rit. later in Part B, the animando is implied to indicate an increase in tempo.

Now for the harmonic analysis of the coda:

The entirety of the coda can be explained as being in F sharp major with modal mixture and tonicization of IV.

Bars 30-38 all have a F♯ pedal note at the start of each measure in the left hand.

Bar 30 roughly uses only I - the tonic chord.

Bar 31 is easier to explain as V13/IV by taking the pedal F♯ note into account along with the right hand's E-G♯-A♯-D♯ chords, even if the right hand never plays F♯.

Bar 32 is similarly easier to explain as IV13 by taking in the left hand's F♯ and B along with the right hand's D♯-G♯-A♯-C♯ chords.

Bar 38 is an almost exact quote of Bar 30 that uses the same chord: I.

Bar 39 starts with a D7/C chord, which can be interpreted as a re-spelled German Aug. 6th of F sharp major (or F sharp minor) or as V7/♮II, except it resolves like neither of them. It proceeds to a more bizarre A♯7 chord on Beat 3, which at least can be explained as a chromatic mediant of F sharp major and shares A♯ in common with the tonic chord.

Bars 40-41 all use only I (barring non-chord tones) and end the piece with the tonic chord.

Given how often the coda returns to the home key of F sharp major (even if the beginning of Part A obscures that home key quite hard), taking only 1-measure breaks at longest, I cannot say that the coda modulates.

Not the answer you're looking for? Browse other questions tagged theory chords harmony analysis musical-forms or ask your own question.

32
Why is bass note so important in harmonic analysis of music?
4
How do time signatures relay information on the grouping of beats?
2
Harmonic Analysis of Chopin's etude op.10 no 5
3
Audiation: dealing with key changes when you hear in terms of solfege
4
What's the best notation for musical navigation?
1
bIII upon bII5, bII7#11omit3, how to name that chord in this context?
7
When does a jazz tune actually modulate?
2
Melody harmonisation: How to handle leaps?
6
Doubts about a diminished fourth - op. 40 Bortkiewicz
3
Doubts about some harmonic passages in Bortkiewicz's prelude op. 40 n.3