Tritone substitution to a major chord?

I'm relatively new to jazz theory and I've been working through the book, Hal Leonard Guitar Method: Jazz Guitar by Jeff Schroedl. In it he describes a tritone substitution as a "V, ii(II), or vi(VI) chord travelling from V to I being replaced with a dominant or major chord whose root is a tritone away" (p.28).

Now my understanding was that a tritone substitution only involves subbing the (V) dominant chord with another dominant chord whose root is three whole steps, (a tritone), away.

I have been unable to find any resource online which says a tritone substitution includes substituting a minor7 for a major7, or a dominant7 for a major7.

This progression sounds very nice and the substitutions sound correct to my ears. I'm just wondering if it would be correct to call this a tritone substitution or if there is a more accurate name for this kind of substitution.

This is not wrong, but it leaves a lot of questions unanswered.

The basic tritone substitution is for V7 chords. Substituting bII7 for V7 preserves the the third and seventh of the chords (by swapping them: third of the original becomes seventh of the other, and vice versa), and allows for a chromatic descending bass in a ii - V - I progression.

Substitutions like the ones in the illustration are also possible, but more highly dependent on context. For example, consider the below melody: B-C-D-E C-B-A.

This sounds fine with the original chord changes, but, IMO, terrible with the suggested substitutions.

On the other hand, a different melody — B-C-E-D | C-G-D-C — sounds fine with both progressions.

The fundamental question is: aside from placing the root a tritone away, what chord qualities can I substitute? There is not a formulaic answer to this. One learns with experience, more by ear than by rule.

IMO the first problem is thinking the tritone substitution is something exclusive to jazz, and it's just the domain of jazz to say what it is or is not.

Only the name "tritone substitution" is particular to jazz. But the harmonic movement is actually very old and for centuries was called an augmented sixth chord resolution.

Technically there is another difference augmented sixth chords resolve to the dominant chord, but it jazz the tritone substitution moved to a tonic chord. However, the thing that maintains the similarity of the harmonic movement is looking at the half step voice leading.

First the fundamental half step movements of the V to I resolution...

...the fifth is omitted to show only the essential scale tones involved. The red lines show the resolution of ^4 or FA to ^3 or MI and ^7 or TI to ^1 to DO. Both of those movements are resolutions by half step. Even when you remove the roots of both chords the G and the C the remaining tritone resolving to a incomplete tonic chord is recognized as the essential harmony of dominant to tonic resolution, the essential function of the dominant. 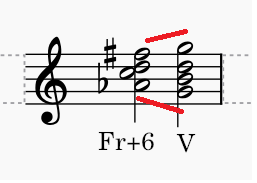 ...where the two tones of the augmented sixth interval - the A♭ and F♯ - move in contrary motion, by half steps, to the two Gs of the dominant.

Notice how both of these resolutions involve the dissonant intervals of either a tritone or an augmented sixth resolving by contrary motion in half steps.

If we break up the tritone substitution resolution into two parts we get...

...now we have both internals resolving by half step, but both resolve to the tonic, in other words they have the same harmonic function, solving to the tonic. 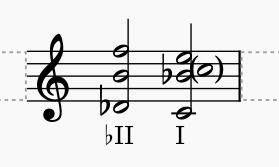 ...but that doesn't change the essential movement of resolving to a tonic chord. Notice that it does effectively make the harmonic movement just a completely parallel motion in all voices by half step. (That will come back up in just a moment.)

We can also return to the augmented sixth chord and see how we simply treat the chord of resolution not as the dominant, but the tonic, it will appear just the same as a tritone substitution, and we can even return the substituted root ♭II to V to get a basic V to I dominant function resolution...

Sorry for the long introduction, but the point is provide a bit of history and make clear the tritone substitution:

So, can you just move any chord in a standard progression by a tritone?

Well, I suppose anyone can do anything they want and then claim any theory label they want for it. But that doesn't necessarily redefine the very well established theory behind what an actual tritone substitution is... or is not.

Harmonic movements can sound nice for various reasons. In this case I found point out:

That doesn't necessarily mean the process used to derive these chords should be called tritone substitution.

There isn't really a specific term to describe it, but the end result isn't necessarily new. Moving chords through a thicket of chromatic half step changes can be found in other styles. Look a Chopin's Prelude in E minor as one example.

...after the tonic chord is just a sequence of roots descending by fifths where the last chord, the dominant could take a tritone substitution...

...the other chords are x just to show the actual tritone substitution is just the the dominant. Those other chord roots can set by recreating the descending fifths progression which some people call "back cycling."

...those two chords could be any combination of major/minor qualities which work as either diatonic relative to the A♭7 or secondary dominants.

Tritone substitution for dominant seventh chords is typically explained by the substitution sharing the third and the seventh with the original chord. But one can look at it in a wider context:

An altered dominant chord is built on altered scale, e.g.: G Ab A# B C# Eb F. A substitute built on lydian b7 scale a tritone away, Db Eb F G Ab Bb Cb, which (enharmonically) shares all the notes, will share not only the third and the seventh, but all other tensions. It can then easily support the same melody.

Of course not every dominant chord is an altered chord, but one can follow similar chord-scale logic for other chords and scales.

For other chords it's more complicated. If you consider Am7, its potential substitution could be maybe Ebmaj7#4. You need to consider it adds b5 and b9 tensions to the original Am7 chord. So will it work? This depends on whether these tensions fit. E.g. maybe voicing Ebmaj7#4 without fifth may help to avoid exposing the b9.

As with the dominant chords one needs to look at the tensions and see if they match, with other chords there are just more opportunities for clashes.

One needs to be extra careful when playing with an improvising soloist who may want to hit various tensions. As an accompanist your role is to support their playing, not to throw them off with unexpected changes. When in doubt the best is to discuss the harmony in advance.

Not the answer you're looking for? Browse other questions tagged theory chords chord-theory jazz or ask your own question.

3
Jazz vs Classical interpretation of this V7c vs iv-m6 chord in a common chord progress?