When you specify an EDO (Equal Divisions per Octave) value, is it always a whole number?

But would it make sense to have a fractional value, say 12.5 EDO?

As an abstract concept it's certainly possible, but it's not clear what the musical motivation would be. Further, one could achieve 12.5 EDO by using 25 EDO and then composing using only every other pitch.

Wendy Carlos used her Alpha scale at about 15.385 steps per octave and Beta scale, approximately 18.8 steps per octave on "Beauty in the Beast". They give up octaves altogether in favor of closer approximations to other just intervals.

This makes sense when you consider that 12EDO is a compromise having just octaves and decent fifths, but poor thirds and really poor [harmonic] sevenths.

I have experimented a bit with more subtle non-octave equal scales that end up close to 12EDO: They have a pseudo-octave that's pretty close to a just octave, but with some other intervals tuned just, or closer to just than they would be in 12EDO:

The Bohlen-Pierce scale divides the perfect twelfth into 13 equal parts. This is equivalent to roughly 8.2 divisions of the octave.


Here's a video explaining the system:

Expanding on my comments to Aaron's answer.

I consider fractional-EDOs to make mostly sense as divisions of multiple octaves. Technically speaking you can of course interpret any equal-steps scale as a real-valued EDO, but if the scale doesn't utilise octaves then I don't find it useful to define it in terms of octaves.

Now, why would you want to divide multiple octaves, instead of a single one? Well, first consider why we divide octaves in the first place. It's not something we think about a lot because the octave is so utterly central and taken-for-granted in music – not just Western but also traditions from around the globe.
The best way to realise the importance of octaves is probably to write some music that deliberately avoids them. To me, the most obvious issue is that it gets tricky to convey finality. In both common-practice music and rock etc., you tend to have both the melody and bass landing on the tonic... in different octaves. (Of course it doesn't always have to be done this way, but it's definitely something you'll find limiting if you don't even have that option, as in Bohlen-Pierce tuning.) But more often than not, there will actually be a spacing of at least one octave in between – so for this concern what seems to be most important is to have some multiple of an octave.
Another reason to have octaves is that it allows you to invert chords. TBH I think this is a bit overrated, because the inversions of a chord are in many ways actually quite different from its base position. Inversions definitely don't work as easy if you always need to jump at least two octaves at a time.

In addition to octaves, you'll want other, more interesting intervals – for purposes of both melody and harmony. What particular intervals – well, that depends on style. Different fractional EDOs will support different intervals.

One starting point would be to look for fifths and thirds, so we can have our common chords. Another option is to focus on melodic intervals, in particular whole steps. And then you can of course start with any 7-limit or 11-limit experiment your heart desires...

One concrete tuning I've been experimenting with lately is 17.5-edo, in other words 35-equal divisions of 2×octaves. That gives you amongst others the following intervals

Here's a short example of music written in this tuning (score using the nearest quarter-tone accidental for each pitch): 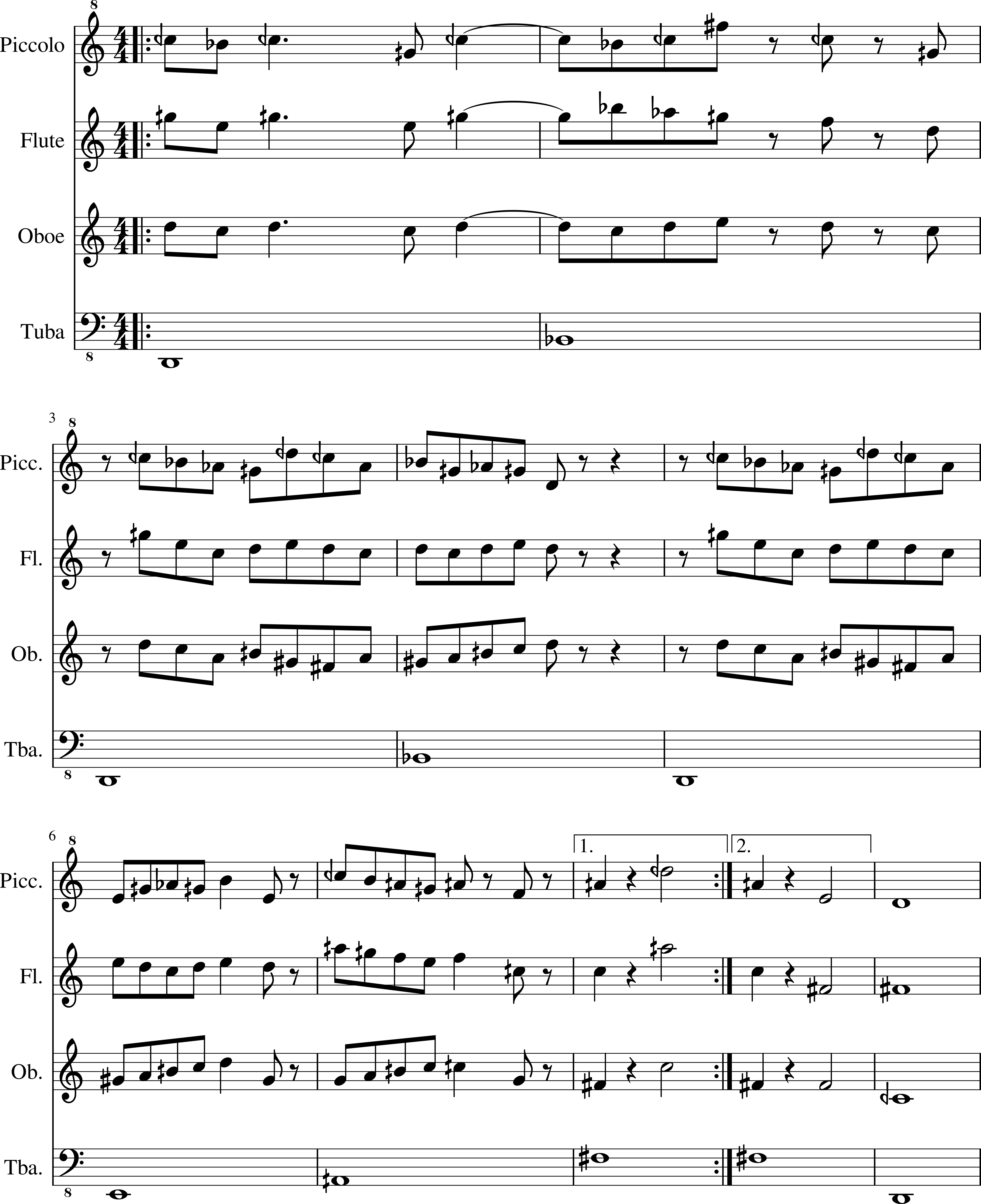 ...now, of course you could now argue that I could as well have written this piece in 35-edo, and just not used any odd-numbered scale degrees. Sure, that's a way to look at it.
But would I? Probably not. Having lots and lots of nearby notes at your disposal can make it only more difficult to find ones that actually work well musically.

And definitely, building actual instruments in 31-edo, 34-edo or 35-edo is a lot more challenging than in something like 17.5-edo.

Not the answer you're looking for? Browse other questions tagged temperament or ask your own question.

12
What kind of temperament to play Monteverdi with?
1
Term & abbreviation for number of tones or notes per octave - independent of temperament or intonation
6
software to determine the tuning (temperament) of a recording?
9
What is a 'temperament', in the most general sense?
8
What do you call a scale with 19 notes per octave? Howabout 17 notes per octave?
5
temperament - its effect on a key
1
Distortion of intervals
5
What are the base notes that different tuning system used?
16
From the piano tuner's viewpoint, what needs to be done in order to achieve "equal temperament"?
2
Did the first piano use an equal-tempered or natural scale?