When transposing songs from major key to minor key, should it be natural minor or harmonic minor?

I noticed that people can transpose songs from major key to minor key vice versa, but I'm wondering that should a major key be transposed to natural minor or harmonic minor? I'm confused

Whichever suits your taste. (And don't forget the option of the Melodic Minor scale.)

It's a transformation more than a transposition. Do you like the astringent augmented 2nd interval between 6 and 7 of the Harmonic Minor? Or the smoother 'modal' feel of the Natural Minor? Do you want to keep the leading note, the 'sharpened' 7th, that's central to the dominant chord, or are you looking for a more relaxed, less 'functional' sort of harmony? Try all these options, hear how they affect the music, make your decision.

And why only consider major/minor transformations? There are other scales...

Look at this set of transformations. A, D and E have a major 3rd. All the rest have as much claim to be considered 'minor' as do the natural, harmonic or melodic minor scales. 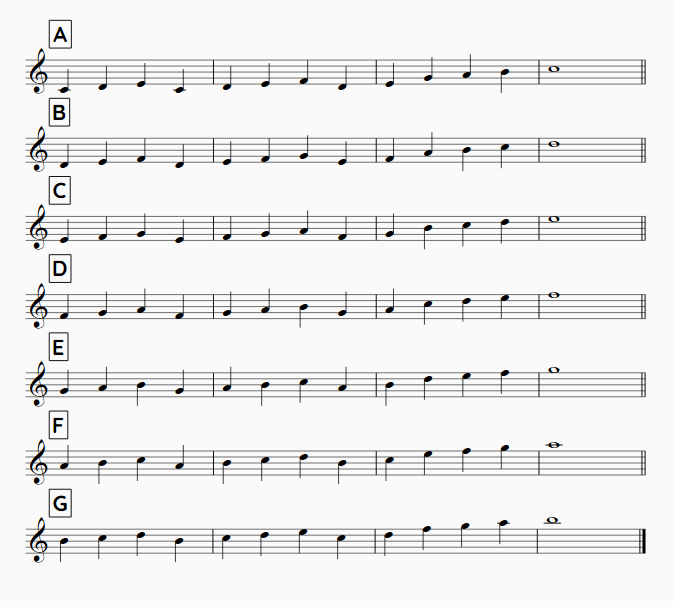 Natural and harmonic minor refer to scale patterns occurring in a minor key; they are not keys in themselves. These describe how some scale steps are mutated (or not) in various contexts.

To change from major to minor, the simplest thing is just to change chords I, IV, and V to i, iv, and v or V (depending; to be addressed below). There are a few minor (hah!) changes that are commonly used in the minor mode.

When approaching the end of a phrase, the dominant chord may have a raised chord third making a major chord (perhaps with a seventh). In other places, this may not sound as good. An example is the Romanesca transposed to a minor key (Pachelbel's Canon in a minor): the major key version is I-V6-vi-iii6-IV-I6-IV-V (C-G/B-a-e/G-F-C/E-F-G(7). There are variants with the last IV being a ii0 or ii06 or the iii6 being a I64. The pattern is repeated several times. In a minor key (though I don't know any common examples) there are a couple of differences. The pattern starts i-v6-VI-III6-iv-i6 (or I6)-iv-(or ii06)-v-(or V) then repeats i-v6-VI-III6-iv-i6-iv-V. The V in the second case usually leads to a short coda but it signals a phrase ending. The v6 at the beginning isn't a major chord as there is no cadential pattern implied. (The I6 rather than a i6 is just to make the bass have a chromatic lower neighbor; the ii0 or ii06 instead of the second iv is common.)

This is a rough idea of how chords are changed. Most things are identical; the i and iv chords get the same treatment as in the major mode; the v and V both are used in slightly different contexts. A common cadence pattern in a major key is ii6-V7-I; in a minor key it's ii06-V7-i; the ii06 is a bit more dissonant than the ii0.

The best way to think of the notes in a minor key is to consider the third step as lowered from the parallel major and scale steps six and seven being "mutable" by having a lower and upper version. There are some common (but not obligatory) procedures in using the different choices available for steps six and seven.

When the underlying harmony is "tonic" (mostly i chords), the upper forms of steps 6 and 7 are common in ascending passages, and the lower form in descending passages. This gives rise to the concept of a "melodic" minor but composers have ignored this concept and used whatever suited them; the lower form of step 6 and upper form of 7 is common in many instrumental passages.

When the underlying harmony is "subdominant" (mostly iv chords and some ii0 and similar), the lower forms of both steps 6 and 7 are often used. Again the raised 7 is used rather often too.

When the underlying harmony is "dominant" (V chords or vii0 chords), the raised forms of steps 6 and 7 are used. The lower form it 6 is common too.

There are some common procedures in a minor key that do not fit the above. The lowered form of scale 6 is the "upper neighbor" to scale step 5 regardless of other considerations. An arpeggiated dominant chord always works well: steps 2-4-5-b6-7 or notes D-F-G-Ab-B in C-minor. The augmented chord on step 3 is very rare (at least until after the 1850s; the voice-leading is difficult), so Eb-G-B would be rare in C-minor (though not impossible).

The VII chord is common in minor key music but doesn't really have a good parallel in major keys. It's not used in cases like the Romanesca i-VII-VI as the voice leadings between VII and VI are tricky.

The above suggestions (or some subset thereof) can allow you to transpose a piece at sight from major to minor (or vice versa.) It's kind of fun; once, one of my band members suggested I play "Fraulein" in a minor key during a dance. I also converted it to a waltz. The audience didn't notice the similarity when we sang "Fraulein" normally in the next set.

Any times I've 'transposed' from major to minor - for choirs - I've used harmonic minor as it seems to be more simple to sing thus.

5
What is the formal definition of 'transpose'?

1
Improvisation on Major and relative minor scales
3
Do notes from non-natural minor scales fit well in the associated major key?
0
Being limited to the natural minor/major, relative minor/major and parallel key
0
Manual of Scales Arpeggios and Broken Chords by Beringer & Dunhill - NO NATURAL MINOR SCALES
6
When to use the term transposed instead of modulation?
2
When does a song sound bad in its parallel major / minor key?
1
Can I borrow chords from Harmonic minor?(Modal Interchange)
1
How to personallise songs to fit my voice in audacity
2
When writing harmonic/melodic scales without a key signature, is it bad practice to put a natural sign?