In this bar from "Sundown", by Gordon Lightfoot, there is a small note (F):

I'm pretty sure it is not an ossia, since it does not occur at the same time as another note, and it does not look like a grace note tied to the following note.

What is it called? How do I enter it in Guitar Pro 7?

The below example is from Paul Simon's "Nobody" (m. 20).1 The first and third verses have two-syllable words that correspond to an eighth note and a quarter note, respectively; but the second verse has three one-syllable words in the same rhythmic positions, corresponding to three eighth notes. (The time signature is 6/8.) 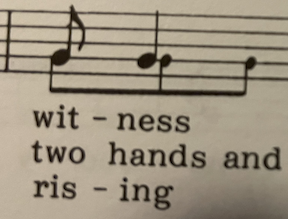 Where it's rather common to see this kind of notation is in piano/keyboard extracts for musical theatre in which an original bass or melody line for single instruments is made more explicit in that manner, like when you have a bass guitar at your disposal.

3
8 quarter notes in 4/4 time?! And how do I insert this into Guitar Pro?
4
Two rests and a note that isn't played? misunderstanding ties
2
When is multiple voices necessary for guitar standard notation?
10
Most complex "block" of sheet music notation
1
How to rewrite this rhythm from common time to 12/8 time?
3
Force bar numbers below the staff and chord names above in LilyPond
2
What is this type of ornament, and how should it be played?
3
What does tying an acciaccatura to the principal note with a slur imply?
6
Sudden note end notation
1
Grace note notation