I have several bars of sixteenth notes that span quite a large range on the keyboard, and also go up and down the length of four octaves on the keyboard quite rapidly. I am not sure about how best to notate this on my score for maximum clarity.

The beginning of the particular phrase starts in the bass clef, and the first note is F3; then the notes ascend up to B flat 4, before coming down again to F3, then up to C5, and back down again, and so on, for several bars. There are some quite large jumps between notes, for example there are two notes in the fourth octave, followed by three notes in the second, and so on.

I have tried using ottava alta lines, but this looks messy because sometimes there are only two notes that would require it. I ended up with too many very short 8va lines above the staff, and it became confusing to read.

I have tried changing the clef throughout the phrase, but again it looked messy, as I would need to change the clefs very frequently within the same bar.

I have tried moving the lower notes of the phrase down onto the bottom staff (with a bass clef) and keeping the higher notes on the top staff (with a treble clef in the top staff) - in other words, using cross-staff beaming. But again this looked more confusing, as I already have two rather complex voices in the bottom staff. Also, some notes of the phrase have accents and slurs that were obscured when I did this.

I have tried keeping the whole phrase in either the bass clef or the treble clef, but that left short sections with many ledger lines (up to six ledger lines). Because the top staff is already in a bass clef, it looks inelegant to the use six ledger lines above the staff, when it could just be in treble.

I want to avoid using three staffs if at all possible.

Any advice would be much appreciated. Thank you.

A few real-world examples to supplement @user1079505's answer. Shown below are examples of:

Chopin's Etudes, Op. 10 (IMSLP) and Op. 25 (IMSLP), are a rich source of these kinds of sweeping phrases.1 The below example comes from his Etude in Ab Major, Op. 25, No. 1. The final six bars contain arpeggios spanning six octaves between the two hands. In the second measure of the excerpt — the first of the "big arpeggio", we can see the uses (1) cross-staff notation, (2) clef changes (in the left hand), and (3) ottava indication. This single measure covers the gamut of options. 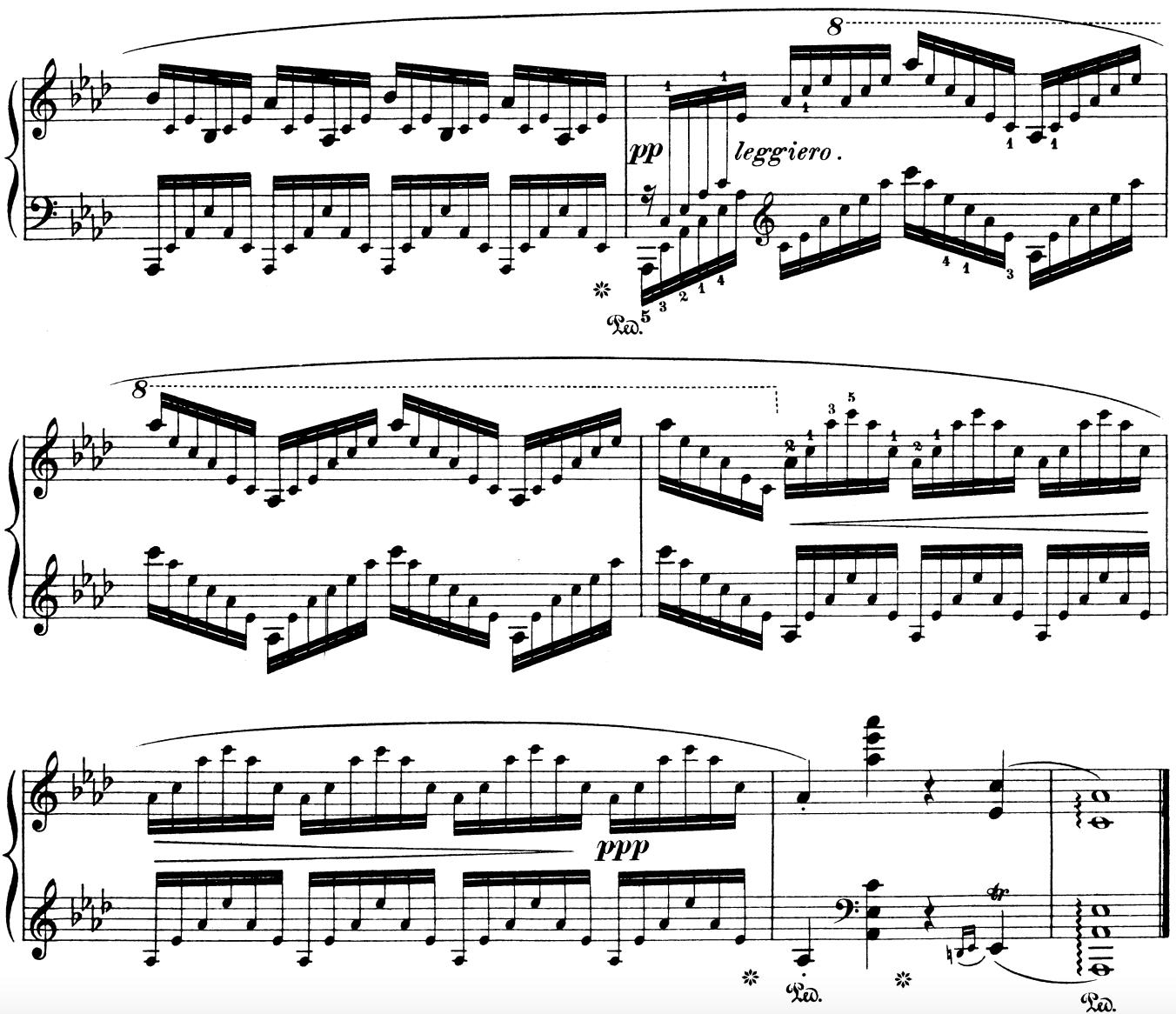 A similar example is found in Op. 25, No. 12, mm. 15–16. Note that the clef changes in the left hand correspond exactly with the ottava indications in the right hand. This helps make reading easier.

Another option is to use multiple staves for one or both hands. This is used more often when the musical roles are distinct. In Rachmaninoff's Prelude in C# Minor (IMSLP), the final section of the piece includes both the left and right hands playing large, sustained "accompaniment" chords, then both jumping into higher octaves to play the melody. Two staves are used for each hand in order to clarify the distinct musical roles. Shown below are measures 46–48 from the Augner edition. 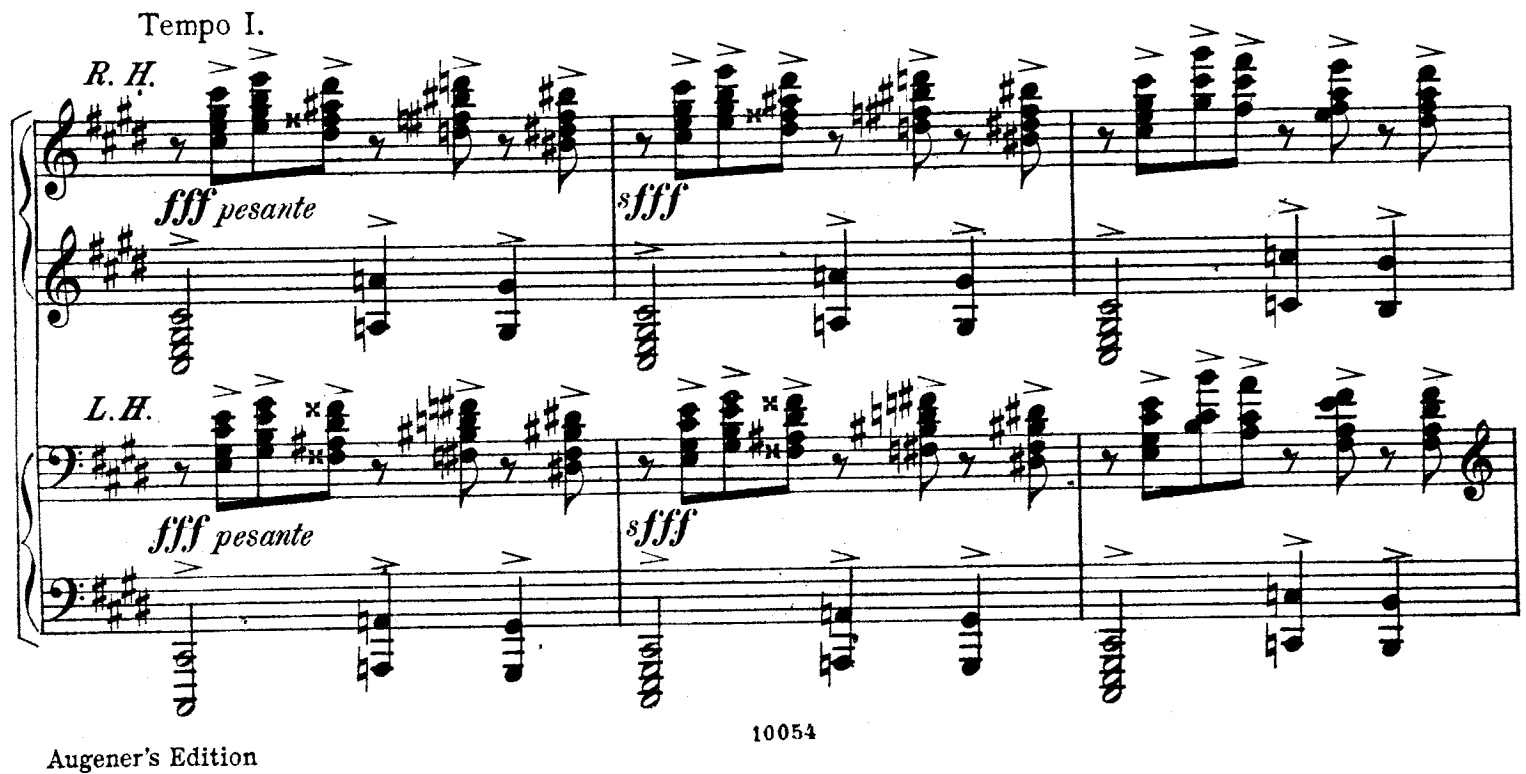 1 All Chopin examples come from the Mikuli editions on IMSLP, linked above.

In the first case the phrase would fit well in violin clef:

Or if you really want you could notate it with cross-staff notation: 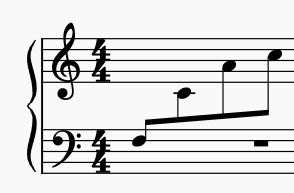 In the latter case I would use 8va or even 15ma (double octave shift) for the whole phrase, not only the notes that strictly require it.

5
Why transpose at the octave?
1
Is it fair to say the treble clef is optimized for piano?
2
What is the best way to indicate the splitting up of chords on one staff between both hands?
10
Why is the treble clef (in the lower staff) parenthesized?
2
Unnecessary and confusing bass clef in Mozart's Fantasia in D minor, Why?
6
Two different clefs at the start of a piece on the same hand
10
Why use 5 or more ledger lines below the bass clef instead of ottava bassa lines for piano sheet music?
5
Lilypond: Putting left hand notes on treble clef - one more question