I'm learning music notation and as both a fan and enthusiast I bought the Star Trek: The Motion Picture film score from Omni Music Publishing. Unfortunately, I've encountered a confusing bit of notation in the Main Title (Bar 4, relevant parts pictured below), and I would like an explanation from more experienced musicians.

The whole piece is in 6/8 meter, but in bar 4 it changes to 2/4. However, for some parts the bar contains a dotted quarter rest, and an 8th note duplet. In my expanding but still limited knowledge, I believe this equates to 6/8, not 2/4. For some parts, the duplet is a repeat of the same in the pickup bar, which is in 6/8 with 3 beats. I have the 2012 soundtrack album, which contains a track with the early takes, and after someone starts too early, Goldsmith says "3 in the A-bar" (which I assume refers to the term "anacrusis", the pickup bar). In both the pickup bar and bar 4, the notes should play with the same duration, which I assume is essentially a dotted eight note, written as a duplet.

In addition to the above, there are also several parts with a quarter rest, then three 16th notes and one 8th note, but seemingly marked as a triplet. This doesn't seem right to me at all, as those notes do no equate to either three 16th or three 8th notes. They also don't fill up all the beats in the bar, regardless of it being a triplet or not.

I assume this is an error in the sheet music (whether in the original draft of the sheet music that the publisher used, or a publisher error), and that it is supposed to be just a 6/8 bar, but that still doesn't solve the triplet issue. It also includes a tempo change when it returns to 6/8, while in the final recordings the tempo is constant throughout.

Edit: replaced picture. To clarify, for example for the contrabass, timpani, and bass drum, the pickup bar and bar 4 are supposed to play the same (basically a "BAH-BAM" sound twice). 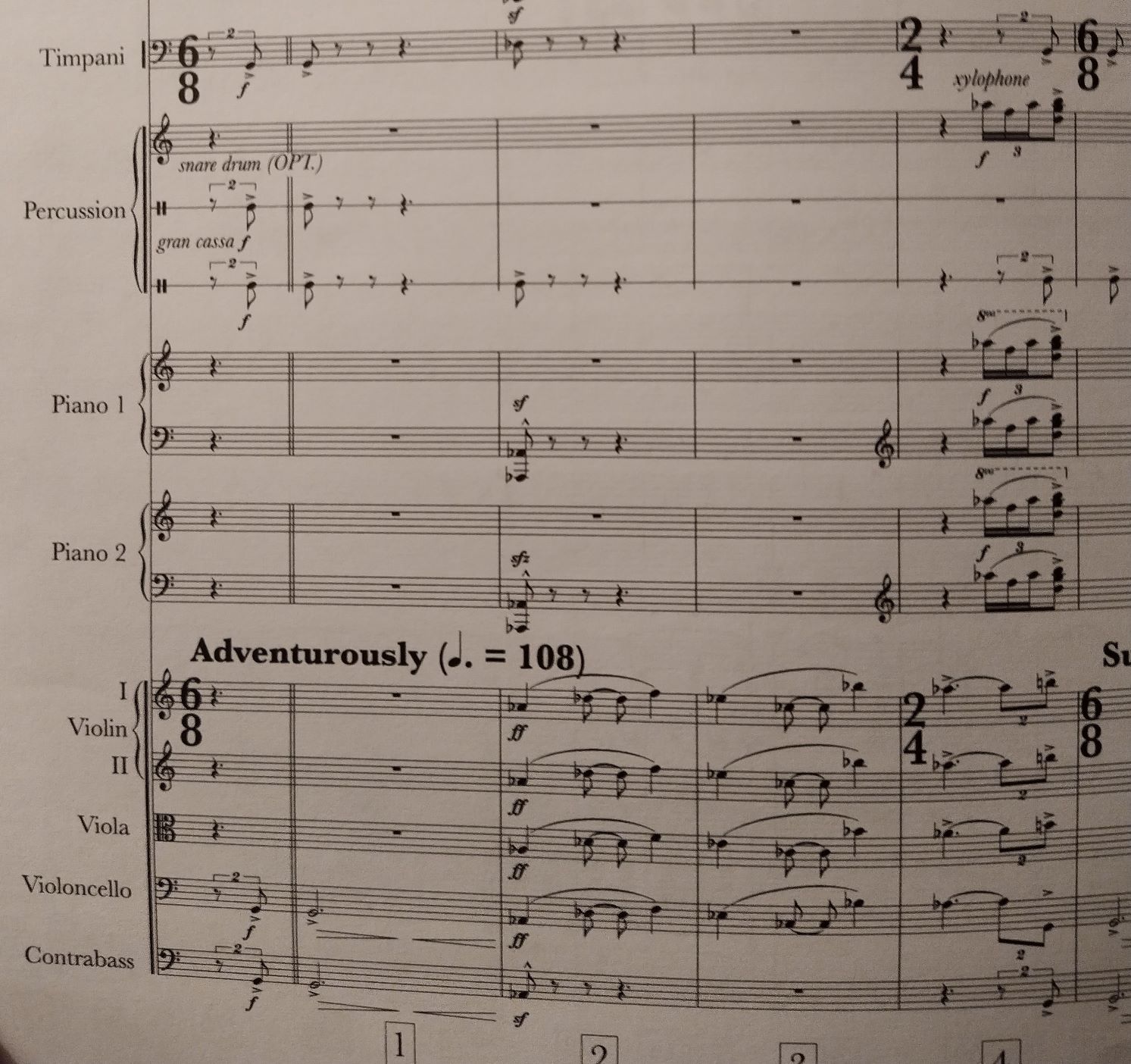 The top bar would make sense in 6/8 but the engraver seems to have forgotten the time has changed to 2/4! (It's not unheard of to notate with some instruments in 6/8, some in 2/4, but you need to SAY you're doing it!)

The bars with the triplet are sloppily written. The 3 should be further back, under the middle note of the 16th triplet. As written, it suggests that the whole group is a triplet.

If you entered this into a sequencer or notation program, playback might assume a constant 8th note speed. I assume the requirement is for a constant 2-in-a-bar speed, dotted quarter in 6/8 = quarter in 2/4. Live musicians probably wouldn't find this a problem. A computer needs telling!

There's a further issue. Whether notated as a duplet in 6/8 or an 8th in 2/4, everyone should hit the last note of the bar at the same time. Therefore they should align vertically, right down the score.

Not a very good day for that engraver :-)

Later: OK, you've made my description a bit confusing by changing the picture! But I think it's still clear what I'm talking about.

Following the comments and provided answer, I contacted the publisher with the findings. They agreed that a mistake was made on their part, when they transcribed the original material. The entire piece is intended to be in 6/8, but some instrument parts, specifically those with the triplets, were written in 2/4. They sent me a replacement page with the fixes, which includes the now corrected triplet markings.

Though I still need to dive into the concepts of polymeter and polyrhythm, this question has been appropriately answered. Thanks everyone for the help!

Not the answer you're looking for? Browse other questions tagged notation sheet-music meter tuplet or ask your own question.

2
Are these dotted and tied rhythms equivalent?
6
Handling of dotted eighth rests when a "swing rule" is in place, and whether physical note position has effect on it
2
How to notate a change to triplet feel part-way through a song?
3
Confusing rhythms/tuplets in Le Sacre du Printemps?
7
How to clearly notate tuplets, both "simple" and "complex," in irregular meters
4
Why is there two notes in a row with more beats than the measure?
2
Time signature inconsistent
3
Why do notes not add up to the bar in this example by Couperin?
11
How Do I Count Note Durations In These Bars?
6
What are dotted quaver beats in 12/8 time?