How do the pegs on Sitar neck work?

I just saw a picture of a sitar (an Indian stringed instrument) with pegs throughout its neck. I searched a few websites, but I couldn't understand them well.

Can you please explain to me about these pegs? How do they work? Are they attached to strings? 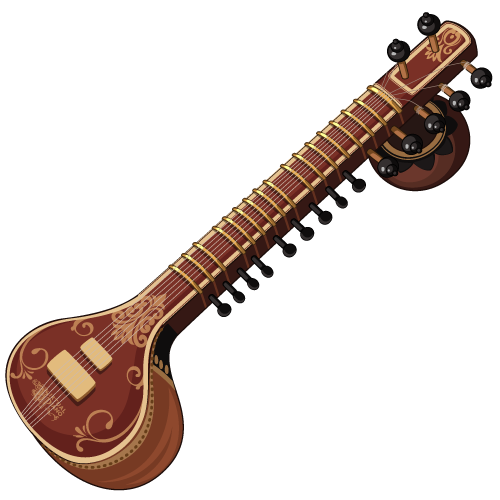 (*) Q: But what if sometimes I want to play a note that doesn't have the fret? A: You use the previous fret and pull the string sideways, just like bending strings on a guitar. It's common on the sitar to bend notes up to a fourth or a fifth above the pitch of the fret.

P.S. I lived a few years in India and I had a few professional sitars custom made, including two experimental ones, made entirely in wood and using guitar tuning pegs instead of the traditional ones. Unlike many other instruments that get better with age, the pumpkin gradually loses strength and brightness as it ages. Sitars are awesome and there is a world of enjoyment awaiting if you go into it even only half seriously...

Yes, they are for tuning strings that are not directly played. These additional strings are sympathetic resonators. They vibrate in resonance with the primary strings and add to the sound.

The pegs don’t use gears, their stability comes from friction between the peg itself and the hole. Essentially the same as violin pegs.

Not the answer you're looking for? Browse other questions tagged tuning sitar or ask your own question.

63
Why Is Just Intonation Impractical?
13
Altering the sound of a guitar to match a sitar
5
What causes this weird sitar-like sound?
15
What gives the sitar its characteristic sound?
15
Does every piano need tuning every year?
5
Have traditional tunings for sitar been lost? Did the even-tempered scale have something to do with it?
2
How can one create a sitar-like tone on a regular guitar?
6
Are these indentations on the frets of my Acoustic for intonation? Can I apply this to the frets of my Electric?
3
What is best practice for tuning a mandolin?
11
How does Sitar produce sound while it doesn't have any sound holes?