What is the purpose of this concert equipment? 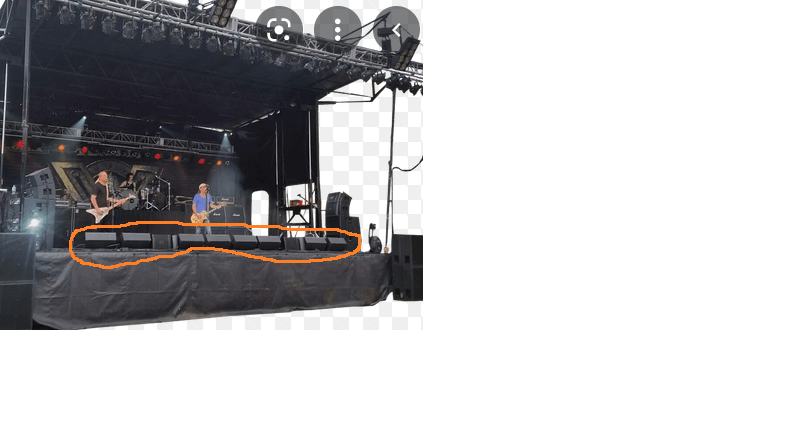 What is the purpose of that equipment and how is it called? I have noticed they always have them in concerts with electronic instruments.

They are called "Stage monitors". Basically they are speakers so that the band members can hear themselves and their fellow musicians more clearly. When the stage is big, it is hard to listen to the amplifiers (both of your instrument and of the others), so the sound techs set up some of those monitors and the musicians can listen to what is being played.

To borrow from Wikipedia:

Adding to the existing answers - monitor or foldback speakers - so-called because they literally fold the sound back to the band. Often, especially in open air gigs, the sound is fed to the audience through large p.a. speakers which are in front of the stage, therefore out of earshot of the players/vox.

This results in the sound being lost to those on stage. They might have their own amps/speakers behind them (although what we see are sometimes empty cabinets for publicity purposes), but often their sound is fed directly to the p.a., which then gets mixed by the sound engineer so the audience gets the best sound. That doesn't help the guys on stage, who may only then hear themselves and/or others, through the house p.a., vaguely, hence foldback.

Problem is, there may already be a lot of sound pressure on stage, drums, although mic'd up, still sound loud; guitarists like their volume, etc. And that sound, on a wide, deep stage, gives nothing like the mix the audience hears. But maybe the drummer wants to hear more vox, but the bass wants to hear more drums. That's where individual mixes come in. With many monitors, as in your pic., each can have his own individual mix, tailored by the sound engineer, and that mix, as mentioned earlier, will be very different, often, from the mix sent out front of house.

Unfortunately, all that extra sound can make the stage a very noisy place, in some ways defeating the objective of having foldback and side fills. This is where IEMs come into the equation. In Ear Monitors, 'hearing aids for performers', if you like. They do the same job, but not only make listening to separate mixes easier, better, and more effective, but work to a degree as ear defenders too.

All this often needs extra guys to man the p.a., as the sound not only needs balancing for the audience, but for each individual on stage, separately, at the same time. Meaning very comprehensive p.a.systems which can have many different foldback mixes available, one for each of the foldback speakers and performers.

These are called monitors speakers or stage monitors or floor monitors in this case. In your picture there are more on either side of the stage). Monitors are speakers aimed at the performer to make sure they can hear what they need to hear.

The typical example is the singer: With the loud drum and guitar amps on stage, they would not hear themselves anymore and start singing out of tune. So, their monitor would send back their own voice directly aimed at them.

It is not a perfect solution, as it makes a loud situation even louder and increases risk of feedback loops (unpleasant high pitched tones). So it needs to be carefully balanced.

Usually the sound engineer behind the mixing panel can customize the monitor sound signal for each musician individually. For example: the singer wants hear him/herself and maybe a bit of bass, whereas the bass player wants to hear more hi-hat etc…

Those are stage monitors - basically, general-purpose loudspeakers with built-in amplifiers, designed to sit on the floor and be audible to people standing in front of them. Their purpose is for each musician to hear clearly and reliably what they and their bandmates are playing.

Sometimes in big concerts, you can see a sound engineer standing at a mixer at the side of the stage, adjusting the monitor mix (the volume of each instrument) for each musician. This is not an easy problem: on stage, you have the direct sound from the drums (which can be deafening) and from the guitar and bass amps (whose speakers are sometimes very directional, i.e., they are horribly loud in one spot and barely audible a few steps away). Then you have keyboards and vocals, which don't come with their own amplification, but it's absolutely crucial that the performers hear themselves clearly (especially for vocals); and you have some of the sound of the P.A. system that is directed at the audience reflected back onto the stage. The stage monitors allow to mix and amplify each instrument such that the musicians are not completely lost in the din.

Not the answer you're looking for? Browse other questions tagged equipment rock-n-roll live or ask your own question.

1
Rocktuner CT2 problem
24
What is the difference between monitors and (loud)speakers in technical terms?
4
Concert equipment or software
0
Removing 'popping' sounds & reverb in a live setting
0
Using the bar's hifi system for performance
25
Is redundancy used when live recording important performances?
19
Do hard rock singers use distortion effects on their vocals?
1
Audio Equipment for Transcribing
4
Guitarist and Bassist as only Bandmembers - Rhythmsection?
9
Why don't bands try to fade out songs live like they do in the studio?