How to analyze mm. 5-8 in the first movement of Beethoven Piano Sonata No. 8

Everything makes sense until mm. 5. It looks like it moves from c minor to Eb major.

Then it moves to the V7 chord. But it's not used functionally because it never resolves.

mm. 5 is probably never in Eb

That D chord in mm. 7 is probably not in Eb major. It makes more sense to be a V/V in c minor.

If we work backward, that vii°7/vi in Eb should be vii°7 in c. It came from iv42 in c (instead of ii42 in Eb). Beethoven just used that long dominant chord in mm. 4 to tonicize to III of c minor.

But what is that unresolved dominant in mm. 6?

It probably makes sense in the context of a sequence. The voice leading takes precedence of its function. And it sounds surprising. I guess there can be a better explanation here. I'm curious to hear what people think. 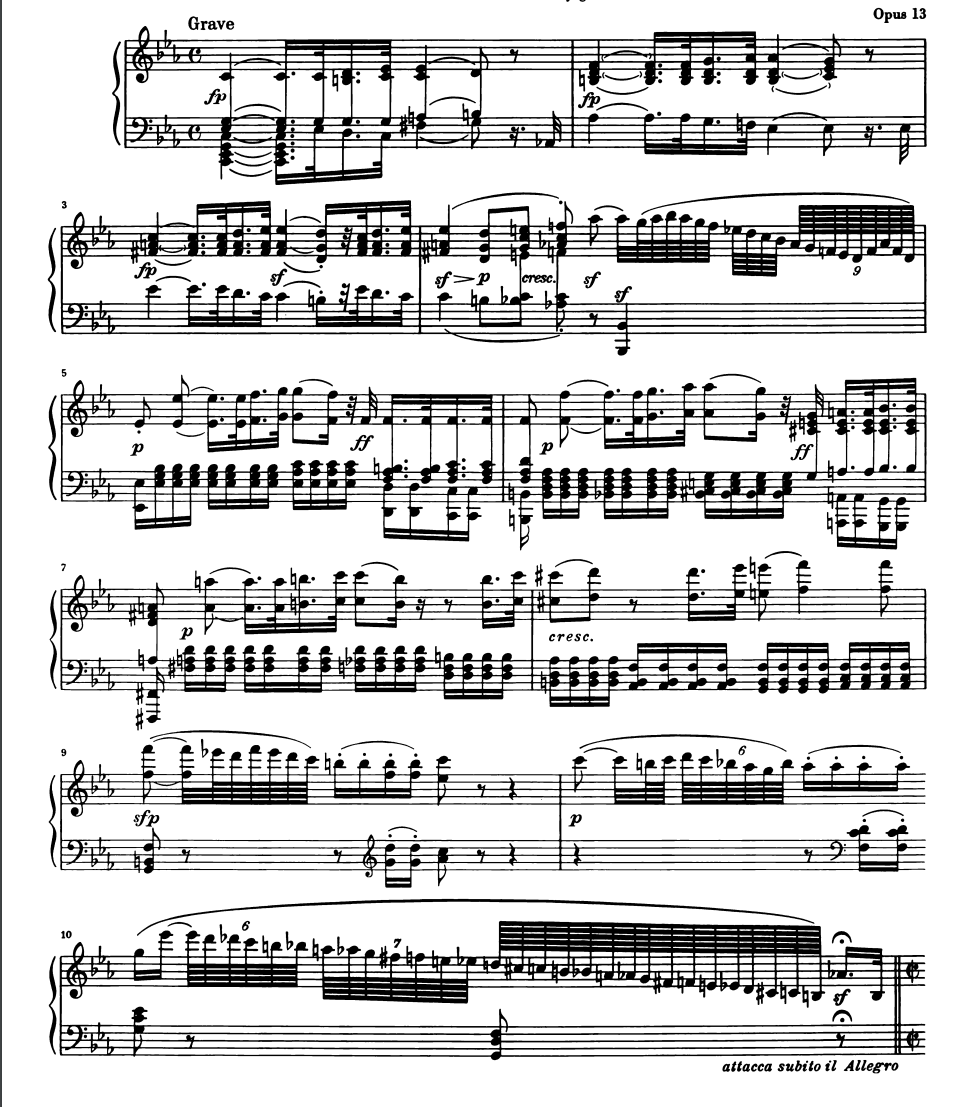 Thanks @Aaron for the response. I think everything makes more sense taking into account the enharmonic spelling. So this is what I have. Everything is in c minor.

Starting from beat 3 until the end of beat 2 on measure 8, it goes through inversions of vii°42 and lands on V7 in beat 3.

At a high level

If we ignore those fancy applied chords (vii -> V on those tonicized centers), this is what happens from measure 5-8 (ignoring the inversions).

I still find that unresolved dominant in measure 6 very interesting. It's Beethoven telling you "Hey, think I'll resolve to Eb? Guess where I go next!". In terms of listening, it creates a strong sense of searching.

I originally tried to find a linear progression here but I couldn't because I was trying to find one that connects the entire passage.

If we only look at measure 5 beat 3 until measure 6 beat 3, it is a linear progression connecting iv42 and vii°42/V/V.

I also found https://www.harmony.org.uk/book/linear_progressions.htm, which has a Mozart example with a similarly unresolved V chord in the progression.

Some people believe that Beethoven was inspired by this Mozart sonata. I think that makes sense. There are many similarities between the two and Beethoven just takes it to the next level.

The chord on beat 4 is spelled as viio[6-5] (Bdim/D), but interpretively, it's rooted on F: a common-tone chord, which undergoes a voice exchange by passing through an apparent ii[6-4]/III, but which is best considered as "just a passing chord".

The Bdim spelling is to help clarify the descending motion of the bass: Eb-D-C-B-Bb across m. 5 into m. 6.

The common-tone diminished chord proved to be a contrapuntal, passing chord connecting measure 5's ii/III with V/III on beat 2.

Beat 3 immediately employs another common-tone diminished chord, this time Bbdim, but spelled as C#dim (viio[4-2]/V/V) to hint at the arrival on D major (V/V) in m. 7.

Beats 3 and 4 comprise a contrapuntal expansion of the diminished chord, again via voice exchange, which conveniently places the "passing" V/V/V (A major) on beat 4 — a strong rhythmic position compared to the diminished chord on the &-of-3 and &-of-4.

After an initial arrival on V/V (D major), beat 3 sees the arrival of another common-tone diminished chord: Ddim spelled as Bdim to reflect the larger context of C minor.

This time, instead of voice exchange, Beethoven takes the diminished chord through its various inversions, all of which serve as an extended chromatic passing chord between V/V in measure 7 with V7 in measure 8.

Not the answer you're looking for? Browse other questions tagged chord-progressions analysis functional-harmony or ask your own question.

0
Interpretation of this Chord Progression
7
Is this really better analyzed in G minor than in Bb?
4
Rootless chords in Beethoven sonata?
5
How should I analyze this passage? As vii°7, V7, or both?
3
What is the functional role of the subtonic chord?
4
Diminished seventh spelling but functioning as an Augmented Sixth?
5
Can I use the chord progression i - v - VII - iv? (Am - Em - G - Dm : in A minor scale)
2
How is D7 functioning here? Applied chord both kind of does and doesn't fit
1
How to approach Iminor - VIImajor progression in a functional harmony way
0
Secondary dominant of a minor tonic?