Why is the usual clef for guitar G clef?

Analyzing by two parameters, polyphony and range, music written for guitar should use two clefs, G and F. Usually, solo guitar has a polyphonic expression. Writing two melodies in a single stave could seem ambiguous and/or hard to read. More, the basic range of guitar (until fifth fret) adapts easily to the clef F. For analogy, the brass instrument euphonium has a similar range of a spanish guitar and it's really awful, in usual terms, to write music for it in G clef (disregarding taking advantage of the musical education of the person or group).

So, why are guitar pieces written only in G clef? Ok... certainly there are exceptions (I've heard about the existence of composers that have written music for spanish guitar in two clefs, but I've never seen such pieces). Anyway and again, what are the cultural, historical reasons for writing music for guitar using only G clef?

First point is that the guitar is actually producing sounds one octave lower than the dots on the G (treble) clef show. Using that clef, and standard tuning, there is only the need for three ledger lines ever to be used at the low end.

The majority of 'trebly - type' instruments will use the treble clef, so it's the better known one for most potential players, and obviously started off life in guitar music thus, and there was no great need to change. Otherwise it probably would have!

There is also no necessity to use a C clef, when the treble clef does the job pretty well.

'Writing two melodies...' I don't understand that, but it happens a lot with piano music, and the 'problem' is solve using up/down stems.

The answer to the question "why" is obviously that it's historical convention. I'm not sure if it can be easily answered. In baroque lute music was still often notated in tabulature. What can be answered is why using G-clef makes sense.

A counter example could be notation for a guitarist playing two melody lines with two handed tapping. In such case two hands operate independently and notating music on two staves may make sense, as in this example: 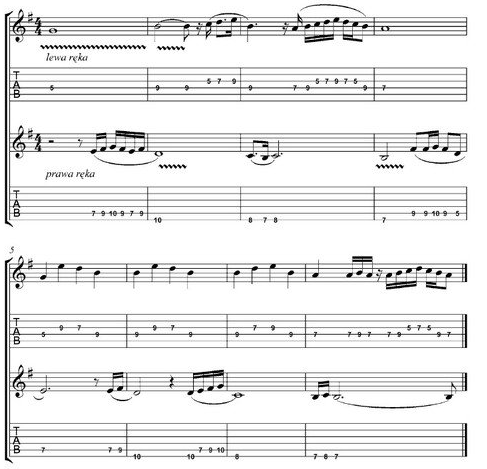 Because out of the three octaves a acoustic guitars normal range consists of only six notes are below middle-c. All of the rest of the range is above middle-c. The bass clef does not make sense and the c clefs is also unfit.

5
Why transpose at the octave?
31
Is there a Relative Pitch Clef?
8
Why are there transposing instruments that transpose by octave?
13
Which instrument (generally) has to read the largest number of clefs?
25
Why are double staff pieces of music not properly aligned for Middle C?
3
Exercises to internalise bass clef?
4
Where should I put the bass clef? Before or after the repeat sign?
6
Interpreting Concert Scores
4
When should tenor clef be used?
0
The Grand Staff Revealed?