Ask Question
Asked 8 months ago
Modified 8 months ago
Viewed 107 times
1
This question already has answers here:
Why does the dominant chord contain a flattened 7th? (18 answers)
Why does Eb7 have a Db and not a D? [duplicate] (4 answers)
Closed 9 months ago.

E7add9+: The E major scale has the notes: E F# G# A B C# D# my teacher as well as tuxguitar suggest that the following guitar chord diagram: 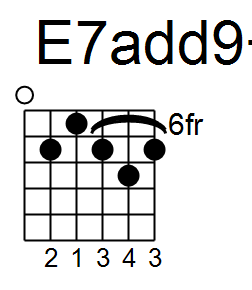 The second is B, the third is G#, the prime is of course E and #9 (as add9+) is G so there is only the 7 left which is D# but in the diagram I only have a D. Where is the information in this notation that the 7th has to be a b7 or diminished/half-diminished not sure what it is called in that case...?

Could you explain me why it is in this chord (I mean I guess it isn't wrong since the chord editor, smartchord (names it only E9+ for unknown reasons) and my teacher name this chord like that.

I would like to get to the same conclusion and why my assumption towards what the chord should be is wrong.

Leaving aside the "add9" for this explanation, the term "E7" refers to the dominant E, which has a flat 7th (which is a D natural). It is usually found in the scale of A major as the V chord. Just because you have a E major chord, it doesn't meant that you are in the E major scale.

If you wanted to mark a major 7th (which is D#), you would write it as "E maj7" (the "maj" here refers to the major 7th, not to the major chord, thus the space, but more often than not, people don't use the space)

Generally in jazz chord names the base 7-chord is taken to be the dominant 7-chord. So when you read E7 the 7-th does not depend on the scale like it would with standard figured bass notation, but it always stands for an E dominant 7 chord. So jazz chord names are agnostic to the key you are in.

Also it is a normal convention to omit the 7 from the chord name specification on a dominant 7 chord with additional thirds on top. So if you read E9+ this implicitely demands an E7,9+.

When you want the big seventh instead of the small you’d either specify E maj7, or often a triangle for the maj7.

Not the answer you're looking for? Browse other questions tagged guitar chords chord-theory or ask your own question.

28
Why does the dominant chord contain a flattened 7th?
4
Why does Eb7 have a Db and not a D?
1
How can I construct the E7 only with theory?

11
Is there any theory to decide a set of plausible chords per measure where a whole melody of a song is given?
2
passing chord preceding 4th in minor scale?
8
What's the difference between a 7 chord and a +7 chord?
1
Understanding why these specific chords are played?
2
Slash chords and notation for A/C (according to Haunschild Book)
4
Why do different sites appear to label the pentatonic shapes with different letters?
6
Determining the seventh chords of a key
4
Are all diatonic chords in the diminished scale diminished?
3
Possible to place a chord diagram summary before the music notation in MusicXML or MuseScore?
3
Why No Augmented Minor Chord?