What note type in the 7th of a chord? - Music Theory

If this diagram is accurate, would the 7th of a Bmin7 be formed from a minor 7th interval or a major 7th interval, e. g. A-natural or A-sharp? I'm assuming A-natural. If this line of thinking is wrong, what is the proper way to denote the 7th interval and also, while at it, how to determine the 9th?

I've narrowed down my confusion: the composition of a triad chord is the 1st, 3rd, and 5th interval from the root. However, some cases notes in this triad are a sharp or flat note. Is there any system or rule set that can be universally followed to determine those cases? or is it just by memory?

Ok so I've narrowed down (based on answers below) that whether a note is a sharp or flat is determined on the key. So I guess the answer to my question is how to determine a key of a note through some sort of rule set, as in do this, this, and this to determine the key of C. If this doesn't exisit, I will result to memorization I assume.

Also have determined so far that the diagram below is wrong because occasionally a chord will start with a sharp and have sharps as the 3rd interval, so that isn't represented below.

So based on feedback below, to know whether notes in a chord are sharp are flat is basically knowing the scale. The pattern I was seeking was TTSTTTS, thanks tim. It is Tone & Semi Tones. I will have to do some more research but thank you everyone for contributing. Please feel free to add more thoughts below. 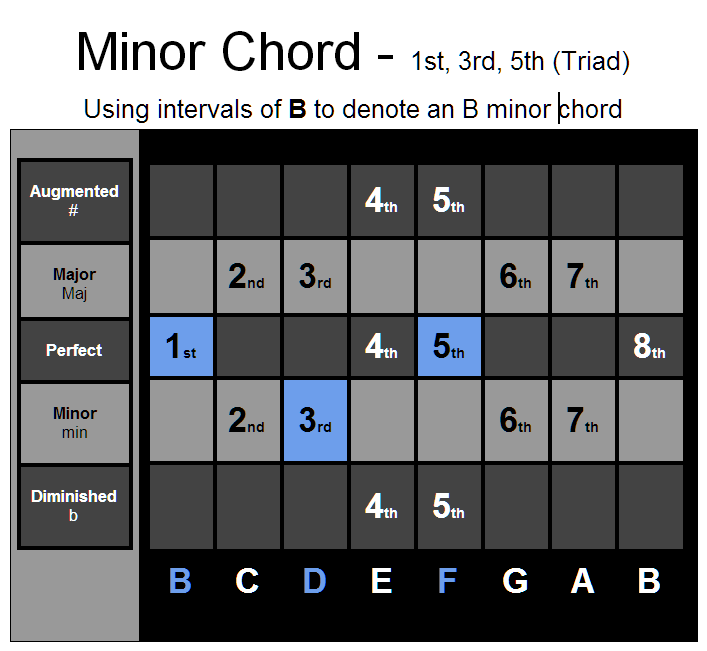 You've maybe been confused by the fact that Bmin. scale sometimes has A# in it. The Bmin. harmonic always does, whereas the Bmin. natural never does, and the Bmin. melodic sometimes does !! Confusing. Yes, very. However, the standard Bm7 , as Wheat states, is B-D-F#-A, using the minor seventh interval of B to A. There is another chord which does use A#, and it's called Bminor major 7, sounding not too stable and often used as a bridging chord .

To understand this lot more easily, use Cmaj. as a starting point. Count TTSTTTS as you go through the scale. It gives CDEFGABC. This will translate , starting at D, for example, as DEF#GABC#D.All maj. scales work in this way, and you need to keep 'black' notes as either # OR b. Don't mix them ! Working on to minors, use the major as a template, but for example, on natural min., flat the 3rd, 6th and 7th notes. If they happen to be #, then they'll become naturals. If they're naturals, they become flats.This is a fair simplification,but I hope it's enough to get you well on the way.

The pitches in a Bmin7 chord are B D F# A. "A-natural" is the seventh scale degree of the B minor scale, and forms a minor 7th interval from the tonic note of B natural.

There are four parts to reading macro-analytical chord nomenclature, which I will break down below. First, let's take the chord from the question:

The second part of the chord "m" will indicate the quality of the chord. A lower-case "m" is used for minor, an upper-case "M" for major (when not dealing with 7th chords,) and "dim" or "aug" used for diminished or augmented chords respectively. Now, there is alternative notation such as a "-" used to signify minor and a "+" to signify augmented.

The seventh is only different when specifically notated to be so:

This portion of the chord is also where any special alternations to the original triad might be located, for example, a commonly different spelling for a half-diminished chord is "m7b5" such that:

The last part of the chord is where compound intervals are located. These are also know as upper-tertian extensions. Here you'll see 9ths, 11ths, and 13ths added or altered in chords:

If all notes up to a compound interval are expected to sound, then the 7th is dropped and the extension takes the place:

As you can see, in both cases the 7th is still flatted. This is due to historical and contemporary performance practice. The rule still applies. If the 7th is to be altered, it must be notated as such:

Upper-tertian extensions may be altered in any way:

Obviously, there is more nomenclature, notation, and other shorthand elements, but above are outlined the basic premise and process of reading chord nomenclature.

There are a plethora of reasons why a composer would like to use chords that do not form part of the scale. If you do not know what it means for a chord to have this characteristic then somehow you are now unable to discern what type of chord you are seeing. Which is bad.

To teach theory in this way. To simply make it a memory exercise to me is to teach it in non intellectually engaging manner which will not lead to theory success.

The "base" for naming or constructing any chord is the major scale starting on the root of the chord - the note that gives it it's name. This is completely independent of context - a C major chord will consist of C, E and G whether it is acting as the tonic in the key of C major, the bVII of D major or anything else. Get rid of the idea that every note and chord in a piece of music must be in one particular scale, or imply a modulation to another key. A C chord is perfectly valid as bVII of D major.

3
What is an algorithm for deriving a secondary chord?
0
Finding Roman Numeral Degree of Measure with Accidentals
0
What scale goes with the F#-7b5? I'm double checking what iRealPro has given
1
Is there a way to determine the flatness (or sharpness) of the 4th note of a chord from its name?
2
Is it acceptable to use a Maj7♯5sus4 chord? Avoid note/interval clarification
4
Diminished 7th notation, match the key or key signature?
0
How do I know what note is #11 in my Fmaj9#11 chord
0
What is the relationship between the 5th and minor 7th in dominant chords?