What is the "stack of thirds" in chord theory?

When talking about chords, chord symbols and harmony from a Western music point of view, something called a stack of thirds is often mentioned. What does it mean? Isn't it a chord voicing - maybe even, just one type of chord voicing? Why is a stack of thirds mentioned when talking about chords in a seemingly theoretical discussion, chord symbols...?

This is already answered and accepted, but I'd like to raise this great comment about different harmonic styles by user leftaroundabout. It would have been nice to have this as part of one of the answers, but I'll put it here. This somehow clarified the different perspectives for me:

I strongly disagree that “the vast majority of chords used can be figured this way but the order of those component notes - the voicing - doesn't detract from the fact that they contain stacked 3rds”. Many chords in common-practice music don't make sense without the voice leading context, and hardly benefit from a thirds-stack interpretation even when that is possible. Many genres use chords that simply can't be rearraged to anything thirds-based (e.g. because of microtonality). Honestly, I'd say only in Jazz-related music is it useful to think of chords as stacks of thirds.

'Stack of thirds' (or 'pile of thirds') is a way of looking at triad-based harmony that analyses every note of a chord as a root plus some kind of 3rd (major or minor), some kind of 5th (perfect, diminished or augmented) etc. continuing with a 7th, 9th, 11th and 13th.

It has its uses. It doesn't cover the decorative use of an added 2nd, 6th or 9th. It gives the impression that if there's e.g. a 13th in a chord there MUST also be a 3rd, 5th, 7th 9th and 11th, which is demonstrably not true, requiring exception 'rules' about what notes 'may' be omitted.

It's a bit like the Circle of 5ths. Or chord-scale equivalence. It makes a pretty picture in a theory textbook (something theory textbooks are very short of, hence the ubiquitous full-page Circle of 5ths diagram). It shows some ways harmonies can be built. But it isn't a Theory of Everything, and it can be futile to try to analyse every harmony using it.

The most basic chords are triads, which have a root note, another note a 3rd above, and another, a 3rd above that. O.k. that last note is really a 5th above the root, but by considering it the former way, we have the start of a stack of 3rds.

Those 3rds are usually M3 or m3, so that gives us CEG - M3+m3, or CE♭G - m3+M3, the basic major and minor triads, respectively. Or, m3+m3, producing a diminished triad, M3+M3, producing an augmented one. All four sound good, and have been the staple for Western music for centuries.

The vast majority of chords used can be figured this way, but the order of those component notes - the voicing - doesn't detract from the fact that they contain stacked 3rds.

After that, comes 11ths and 13ths, simply by stacking extra 3rds to the list. Oft times some of the 3rds are omitted, for various reasons - voicing, impossible to finger, etc.

About the only chord that doesn't stack like this is the 6th, and I'm not including sus or add chords - which wouldn't 'obey the rules'.

When talking about chords and chord symbols, the term "stack of thirds" is specifically not about voicing - it's the theoretical model behind traditional Western chordal harmony that's used for reasoning about other properties of chords, excluding voicing.

The practice of traditional Western music separates a chord's functional properties from its voicing. There can be many different voicings of a chord, i.e. orderings and/or doublings of notes/pitches in different octaves, and each voicing has a different sound to it. The voicing can be dense or open, or it can have seconds, thirds, fourths or fifths etc. inside the chord, and each of these intervals affects the chord's sound. But in addition to that, there's an idea of a chord's function: What does it do in the big picture? How does the chord develop and move the harmonic story? From that point of view, every voicing of a chord achieves the same or equivalent effect. Any voicing of a home chord (tonic) feels like home. Any voicing of a dominant can be used to do the job of a dominant chord.

In order to exclude the voicing aspect of a chord X, a chord theorist asks the question: disregarding the voicing aspect, which stack of thirds would exhibit the same or equivalent harmonic properties as chord X?

For example, let's say we have these two sets of notes 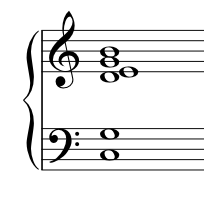 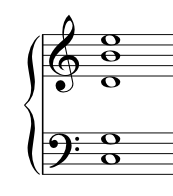 To find what's the theoretical, "canonical" voicing for those, we order the notes so that

And we notice that both example chords are reduced to an identical stack of thirds. (I supposed this should be the only possible way to order the note names so that every note-to-note interval is a third) 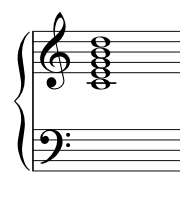 This stack of thirds is the canonical simple voicing of C maj9 chords. The stack-of-thirds voicing is the textbook example of Cmaj9 chords - even though many of us would agree that it's by far not the nicest sounding voicing at all. However, this reduction allows us to harmonically simplify and reduce the harmonic stories of entire pieces in terms of chord symbols and chord progressions. Which is very handy! No matter which voicing was used, it's just a Cmaj9 after all. Simple and manageable.

What's implied by this stack-of-thirds thinking?

You may notice some assumptions behind considering a stack of thirds to be the theoretical functional essence of a chord. I notice the following assumptions:

Those assumptions may be true for some types of music and some subcultures of music-making, but certainly not all. Assumption 1 is trivially falsified by something like C - C# - D or C - F - Bb. Or for a more controversial example, C - Eb - E - G - Bb, for which an enharmonically equivalent stack-of-thirds can be found by enharmonically respelling Eb as D#. How about a power chord C - G?

Assumption 2 might be a bit more subjective and cultural. What aspects are relevant in music? That can vary greatly between different cultures.

In any case, it should be clear that the stack-of-thirds thinking is not a be-all, end-all model of chords, for all intentions and purposes. It serves a purpose in certain contexts. Use it where applicable.

The "stack of thirds" is literally that - a stack of notes where each adjacent note in the stack is a 3rd away from its neighbour(s). Not only does this make full versions of extended chords (7th chords, 9th chords, 11th chords, and 13th chords) easier to envision, but this also emphasizes that Western music primarily uses tertian harmony. Tertian harmony is built on stacks of thirds and inversions thereof (along with mild variations thereof such as suspended chords).

Harmony built on stacks of fourths is called quartal harmony instead. This is uncommonly seen in Western music (I find it significantly more often in jazz and video game music than in classical, pop, EDM, rock, or metal) but has picked up there starting in the early 20th century.

Harmony built on stacks of seconds is called secundal harmony. This is much rarer than the ones above due to its increased dissonance.

Not the answer you're looking for? Browse other questions tagged chords chord-theory or ask your own question.

8
Playing Piano in a Big Band / Chordal Accompaniments
10
How do you name chords in 20th Century Music? (Chords stacked in intervals other than 3rds)
12
Is there a name for a chord which combines the major and minor thirds of the root?
1
Exhaustive list of chord (at least triad and dom7) functions for a software ear training tool
6
Chords behaving as a melody
8
How to accompany with piano in latin music when given only chords?
0
How do I know what note is #11 in my Fmaj9#11 chord
5
Em/C: Sound Notation, or Dirty Shorthand?
6
Does an altered 9th/11th/13th imply the full tertian stack?
7
Could "E7(♯9)" be plausibly called "Em7(♭11)" or "Em7(add ♭11)" as well?