Could one make a piano with all notes placed on narrow white keys?

This piano would include every note normally on a piano, just without any visual distinction between the accidentals and naturals. The keys would be narrower than normal white keys, but, I think, not as narrow as black keys. Has this been done? Could it be done?

What you describe has (almost) been done, in keyboard rather than piano form at least - the Dodeka_keyboard: 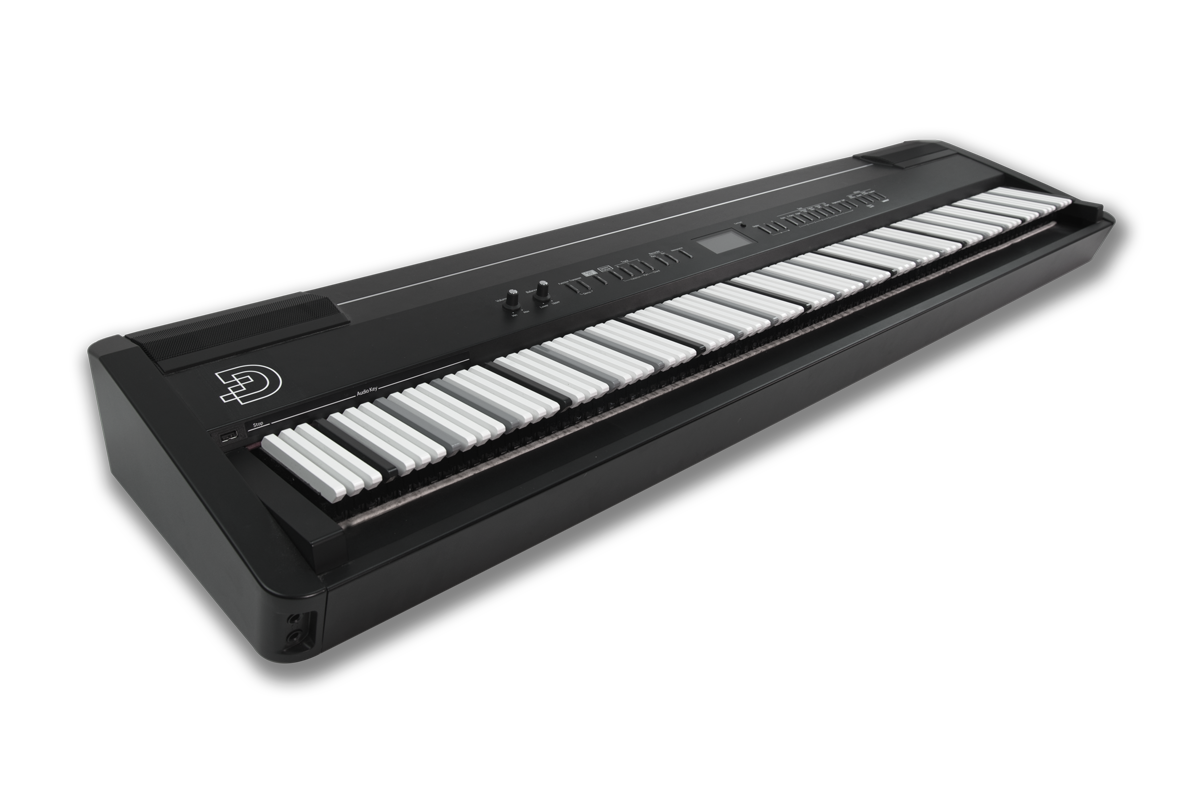 The keys corresponding to C, E and A flat are highlighted to provide a visual reference as to 'where you are', but there's no mechanical reason these couldn't be white.

This is a particular example of an Isomorphic keyboard.

It certainly could be done. It would just be a matter of lengthening and lowering the black keys and narrowing the white keys proportionally. To make the keys the width you're describing, could also be done, but the scale of the piano — the size, shape, and string-connection points of the iron frame — would have to be modified.

To the degree it's been done before, there is an all-white-key "Sinhakken" piano from Japan. However, it excludes what would otherwise be the black keys. It's strictly a "key of c" piano.

There are a number of articles and videos about it. Here's an article, which includes a video, from the digital radio station Classic FM.

FWIW, there's also a YouTube video of an "all-black-key" piano. It's a regular upright piano with the white keys removed.

If you remove the "front panel" of an upright piano and look how the keys continue after the part that is black and white, you'll see all of them having wooden levers of the same width. The black keys are basically right on top of the levers, the white keys flare out in some pattern such that there are seven equispaced white keys per octave. Obviously it would be easier than this to just extend every lever into a single centered key like the black keys already are.

The Jankó piano does something similar but staggers the keys into two rows (and duplicate rows) to better match the realities of playing intervals to two hands.

This hasn't caught on. If you try playing a scale, or a sequence of thirds in a diatonic scale, you'll understand why. A sequence of thirds played in a single hand would not really work in a one-row arrangement if you had to play it legato. And it would end up a nilly-willy sequence of minor and major thirds in some strange pattern: the inherently diatonic nature of most Western music is not a nice match to a uniform keyboard layout.

One area where uniform keyboards have taken off to some degree are chromatic button accordions that have a uniform layout with three staggered rows of buttons (and possible repeat rows). Here they allow a much better match of the space requirements for producing a note of a given pitch to the space taken by a playable keyboard. For a wearable instrument, they are able provide a much larger range than possible with a piano-style keyboard, and since there are no key dynamics (the buttons only open valves while the dynamics are mostly created with the bellows), the much more compact hand shapes are not impacting the ability for dynamically balanced play.

In ensembles playing from score sheets, the difficulty of sightreading polyphonic scores in the usual diatonic notation for such a uniform keyboard makes for a lot of players choosing piano keyboards in spite of the technical advantages of a button keyboard. In countries with a folk music accordion tradition, CBAs fare better since playing them mostly monophonically by ear while adapting to the key of other players is similarly natural as it is for string instruments that are sort-of uniformly playable (fret/fingering distances decrease with higher pitch, of course). Outside of folk music traditions (and very ingrained instrument cultures like in Finland and Russia), the CBA tends to be an instrument mostly played by soloists where the possible gains in technical achievements more than offsets the additional hurdle of learning to map diatonic music and notation to a uniform keyboard layout.

So while an instrument exactly like you envision is not readily available, it would be easy to build. However, experience both with pianos and with other instruments makes apparent that it would not end up an option attractive for actual playing.

Even if you look at instruments like recorders, flutes and other woodwinds, the basically arbitrary key/hole/control arrangement of a monophonic instrument is patterned after diatonic scales. That even holds for comparatively "newfangled" instruments like saxophones or ophicleides (the latter being a brass instrument, of course).

Not the answer you're looking for? Browse other questions tagged piano scales key construction instrument-making or ask your own question.

28
What modern innovations have been/are being made for the piano?

19
Origin of the asymmetrical keyboard layout of a piano
15
Is there such thing as a piano-like keyboard with all whole tones between two adjacent white keys?
6
Full range with white keys only?
5
When we talk about an 88/76/etc Key piano, does that include all keys or just white notes?
47
Why does the scale have seven (or five) notes? Why not six?
0
Is there the exact same frequency-multiple between any-2 successive keys in any keyboard-instrument?
3
How to explain black and white keys on a piano keyboard