What is the difference between a dominant scale VS a mode?

I'm a beginner guitar player and I just started learning music theory. I've been going back and forth into scales and modes but I have little to zero knowledge of how they work, mainly knowing about the "Whole Step/Half Step" diagram.

Side note: I've been playing around with Phrygian Dominant Scale on my guitar and it sounds more "middle east"'ish than the Phrygian Mode. Are there other Scales/Modes like this?

Basically, modes come from a major scale, also known as the Ionian mode. This is your TTSTTTS spacing, note by note, as in Cmaj: CDEFGABC.Starting on the 2nd note, and rising to an octave above it, you get the Dorian mode.The next starts on the 3rd note, E in this scenario.It's the Phrygian mode. The 4th degree start gives the Lydian, the 5th Mixolydian.Start from the 6th (A) and it's the Aeolian, leaving an odd sounding set of notes, not used too often, called the Locrian mode.

Each of these modes contain the same notes, as seen above, but they work because each 'centres' around its start note e.g. G mixolydian has G as its root.That's why it sounds dominant - it has a flattened 7th compared with the major scale, which is used as our datum point.

Going back to that major scale - if we flatten just the 3rd note, we get an ascending melodic minor.This can then be used to make a new set of modes, each one starting on a different scale note.

Start on the 5th degree of this melodic minor scale, and you've found your Aeolian Dominant.A.K.A. Mixolydian b6, Hindu and Aeolian #3, amongst others.

More importantly, and more advanced, are the chords that each degree of any scale will provide.As triads, the major scale will give, in turn, maj, min,min, maj, maj,min,dim.

Take this on to the Aeolian Dominant, and it gives: maj,dim,dim,min,min,aug,maj.Obviously these chords will give a very different flavour to a song containing them compared with the set used for major/Ionian.

The Phrygian Dominant you mention is similar in that it takes its notes from the Harmonic minor, starting at the 5th degree, but the mixes of notes to give the chords are different.

All this is really not starter theory, but I hope it answers your question.As to why it's called Aeolian, which is the 6th degree of the major, don't know yet.

I this picture you can see the Mixolyidan mode is the fifth mode of the major scale.

There are different dominant scales. To be considered dominant the scale must have a major third (3) and a minor seventh (b7). 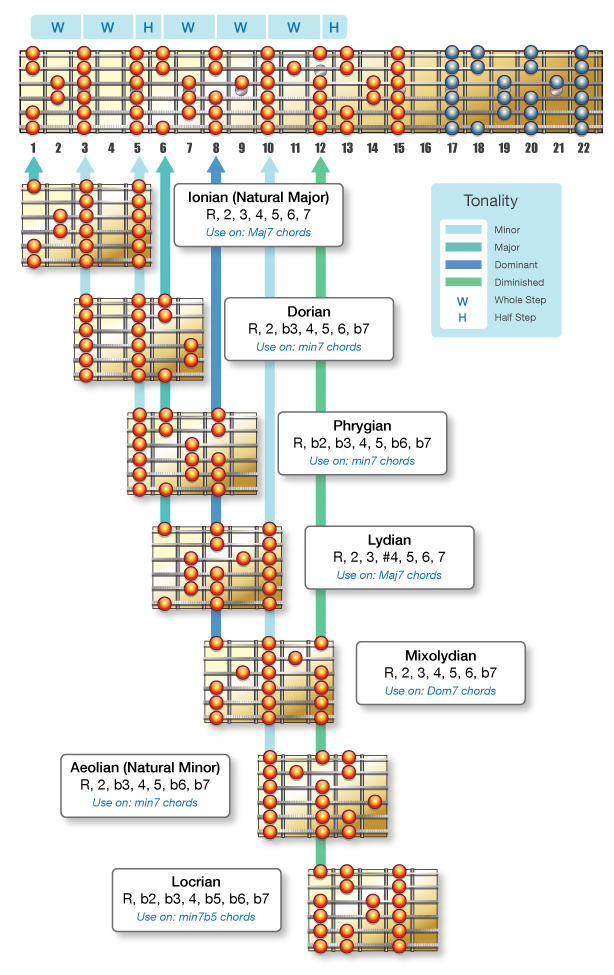 I have been doing my own research around this. I don't think the information here is clear enough. If you play the Same notes of the Diatonic scale for C but start on D, you'll get D Dorian, not C Dorian. While the modes change with what note you choose you have to be careful to distinguish what is what. This wasn't made clear on the answer.

All of this modes contain the SAME notes but are on different keys (tonal centers).

For determining the notes of C Lydian for example one must keep the same key and move the intervals around.

You can practice and verify this using this link: http://jguitar.com/scale?root=C&scale=Lydian&fret=0&labels=letter&notes=sharps

If you play the notes of C MAJOR over a G 7 chord you are playing what you could call a dominant scale , you do not have to begin with G it is of course silly but you have to emphasize the B and F of this scale and be careful with the use of the note C !

1
Diatonic Scales and Modes. How do I reconcile information about Modes?

4
What are the official modes from Ionian to Locrian?
4
Why does the minor scale have modes?
0
What is this scale?
1
How do you establish a feel of the mode?
3
Is there such a thing as a Harmonic key besides for Harmonic Aeolian?
3
What are the modal characteristics of major modes?
4
Aeolian mode harmony
1
What are historical and structural reasons for the prevalence of Major and Minor?