Ask Question
Asked 4 months ago
Modified 4 months ago
Viewed 931 times
9
This question already has answers here:
Why do the keys in the circle of fifths have the pattern of accidentals that they do? (3 answers)
Closed 4 months ago.

I understand that an easy way to determine the 'key' of a piece of music is to either look at the last sharp within the key signature and add a half step (semitone), or look at the second to last flat. But I am wondering why is this the case?

What about going around the circle of fifths (Starting at C Major) causes the next key in succession to add a sharp to the 7th scale degree? Any insight is greatly appreciated.

This gives us scale degrees and intervals between as follows:

Now we're going to start the "next" major scale beginning on degree 5 of the previous scale. Thus things map as follows:

Notice that all the intervals line up except for degrees 3-4-5 or the original scale, which correspond to 6-7-8 of the new scale. 3-4-5 is H-W; whereas we want W-H. This is achieved by raising scale degree 4 of the original scale a half step.

Put simply: The sharp introduced as one goes around the circle of fifths is always the leading-tone (i.e., scale degree seven, or, one step before the tonic) of the new scale.

Adding a sharp is "the same" as subtracting a flat, which is why when key signatures switch from sharps to flats, the number of flats in the key signature is reduced until there are none and the circle has returned to C major.

As a brief example, Bb major has two flats: Bb and Eb. The next step in the circle of fifths is F major, which has only Bb. The Eb from Bb major was "sharped" to create the leading tone for F major, leaving only Bb. The Bb is then sharped to result in C major.

A similar logic shows why the second-to-last flat also shows the key.

This time, the new scale begins on the fourth degree of the old scale (i.e., the circle of fourths — the "backwards" circle of fifths).

Now the "wrong" intervals are 6-7-1 of the old scale, which correspond to 3-4-5 of the new one. To fix the problem, we lower the old scale's leading tone — that is, the "new" flat corresponds to the fourth degree of the new scale. Put another way, the new flat is always a fourth above the new scale's tonic. But that tonic was itself scale degree four of the scale before that one: i.e., the second-to-last flat.

If I have not said it hundreds of times, it is because I have said it thousands of times. Makes me rather nostalgic of my teaching days.

The flat keys always count four steps past its name. It is how the circle of fourths work for the keys with flats in them.

Of course, like it has always been new keys keep old sharps and flats.

The easiest way to learn keys is to have a good theory teacher do key signatures drills with you until you know them. Yes, what you say is true, but it is not how it should be taught.

Music Theory Pedagogy 101 in a nutshell.

I understand that an easy way to determine the 'key' of a piece of music is to either look at the last sharp within the key signature and add a half step (semitone), ...

Technically, when the sharp is added to the key signature it signifies that tone becomes the leading tone and so the half step above that will be the tonic... provided the mode is major.

How is that supposed to work if the mode is minor? Now you need a new rule of thumb that says the minor tonic will be a whole step below "the last sharp."

...or look at the second to last flat.

How does that work with a key signature of one flat? There is no second to last flat in that case.

That rule also give no consideration whether the mode is major or minor?

Technically, adding a flat to the key signature signifies that tone is the subdominant when the mode is major, and in the minor mode it will be the minor submediant.

This isn't how you read key signatures. You just check the count of sharps or flats. And to know the tonic, you usually just look at the first bar or final cadence. But the details of finding the tonic are really a separate issue.

The first huge flaw in that "easy way" is it makes no distinction about mode, major or minor. The second flaw is in an attempt to make it "easy" it glosses over the detail that you still need four "rules" to cover the basic cases of key signatures of either sharps or flats and either major or minor mode.

By the time you make that "easy way" actually work you've done just as much work as learning the key signatures.

The typical thing for teachers to do seems to be rote memorization, like what Neil Meyer suggests in his answer. I think it's better to learn them in context through actual playing. At the very least make scale practice the same time to memorize key signatures. Instead of scale practice you could use simple classical stuff, like Czerny's Recreations, or a hymnal, to find lots of material in keys of zero to three sharps or flats.

This is my break down of key signatures, getting more difficult moving left to right, adding more sharps or flats... 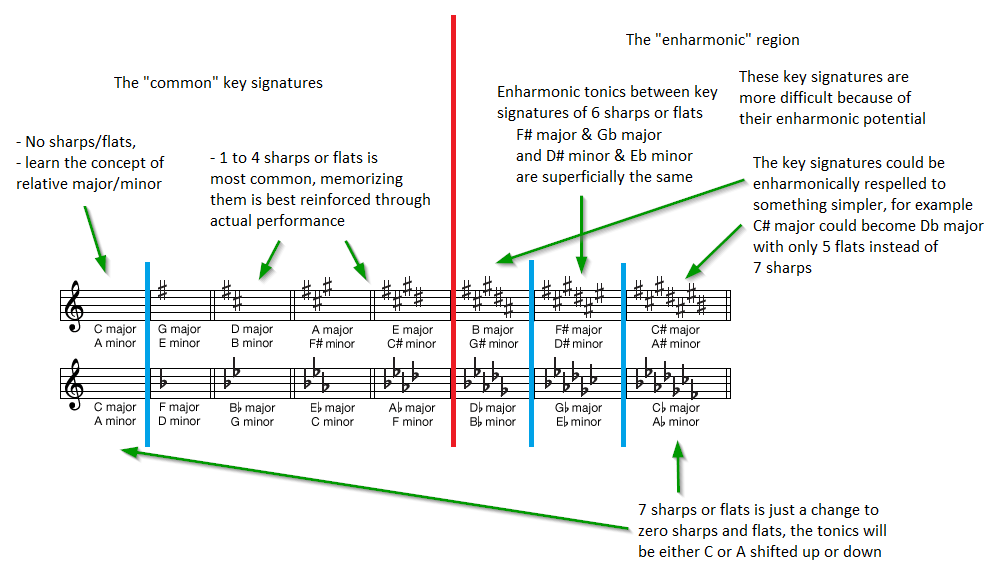 "Common key signatures" and "enharmonic region" are labels I made up. I don't think you will find a chart like this in a textbook.

Broadly speaking key signatures get complicated when there are five or more sharps and flats, and for the most part those keys are the ones where the sharps or flats also apply to the tonic, because those keys can be respelled to various enharmonic equivalents. 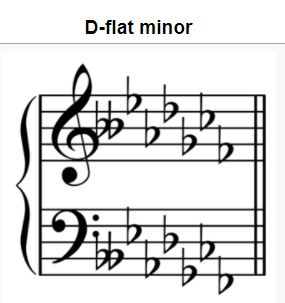 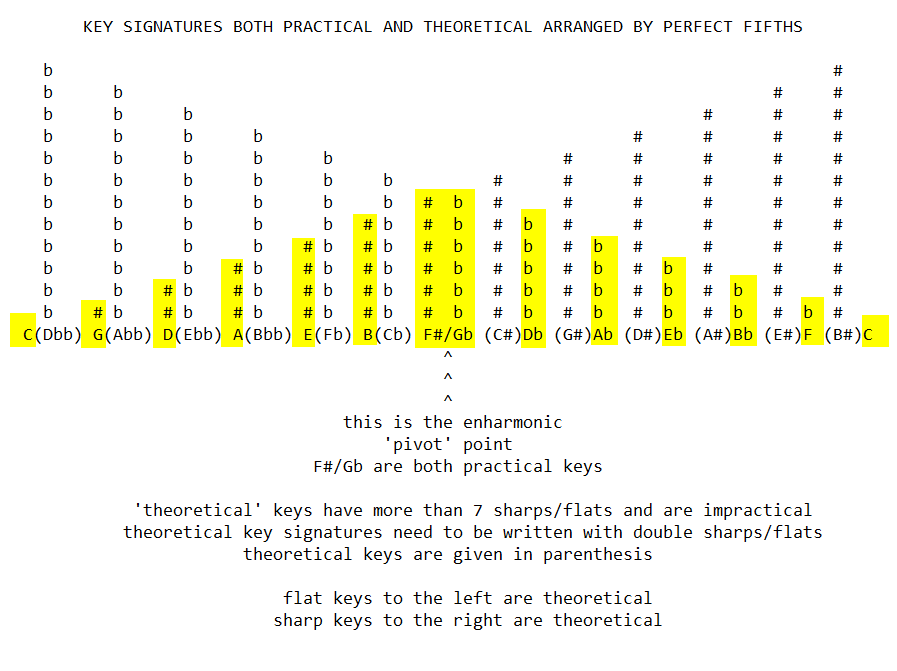 ...theoretically the chart is infinite. You could keep expanding to the left and right forever moving in perfect fifths, but those theoretical keys will have double, triple, etc sharps/flats which is impractical. The practical key signatures use 7 or less sharps/flats. You could say the number of key signatures is infinite, but the ones that are practical is a tiny, finite slice of them.

You should notice the symmetry of that chart. You can apply a similar symmetry at the keyboard. Start on the piano key for F#Gb and then move ascending/descending from in contrary motion in half steps. Each side of that F#/Gb pivot will render keys to the left and right which are the same number of sharps/flats...

Even though the musical system of 7 letters, 12 chromatic tones, and the layout of black and white piano keys seems a bit of a muddle, there is a definitely symmetry to it all, if you view it from the right perspective. But, most textbooks and teachers don't present these symmetries.

I don't mean to throw too much theory at you. The main points are...

If you embrace the idea of playing in all keys as an essential musical skill, just combine key signature learning with scale practice. By the time you have learned to play all of your scales you will know all the key signatures. If you don't embrace this idea, you will probably be forever befuddled by key signatures.

Look at the major scale intervals

The EF and BC fall on the H's so there's no sharps or flats.

But the next key up starts at position 5, but then the EF doesn't fall on an H but instead a W. So a half step is needed on note 7.

In Gmajor the 6 and 7th notes are E and F# where as in C they were A-B (a whole, no accidentals needed).

The distance is the same ... 12 half notes per octave but as each key starts at the fifth note, and the pattern is 2W,H,3W,H the notes have to change to fit the pattern as only BC and EF are half tones.

Not the answer you're looking for? Browse other questions tagged theory key-signatures or ask your own question.

5
What note type in the 7th of a chord? - Music Theory
4
Sharps vs Flats - Formula to determine correct sharp and flat notes in a scale
11
Why are key signatures like E# and B# necessary?
3
Is there a name for this phenomenon in the circle of fifths?
29
Are sharp keys "bright" and flat keys "dark"?
15
Why are accidentals not additive?
5
Why do the keys in the circle of fifths have the pattern of accidentals that they do?
5
Key signatures with Quarter Tones