I read an interesting point that when we use accidentals it might be fruitful to think of it like changing key signature (locally, I guess). So I naturally started wondering if the more exotic key signatures have names? I know Mikrokosmos by Béla Bartók have a lot of these weird key signatures but I have not found any names for them yet. Does anyone know?

So for example 1 sharp at some line or space, the others naturals, or some other combination of flat, natural and sharp on the seven possible lines and spaces. I found a maybe related article on wikipedia about modes of the heptatonic scale and the key signature system but it was a bit heavy for me.

I think I know what you're after, but your not-quite-correct use of standard terminology is obscuring it a bit.

This isn't exactly a list, but more of a workflow:

To demonstrate, I found Mikrokosmos on YouTube, and looked at this part: 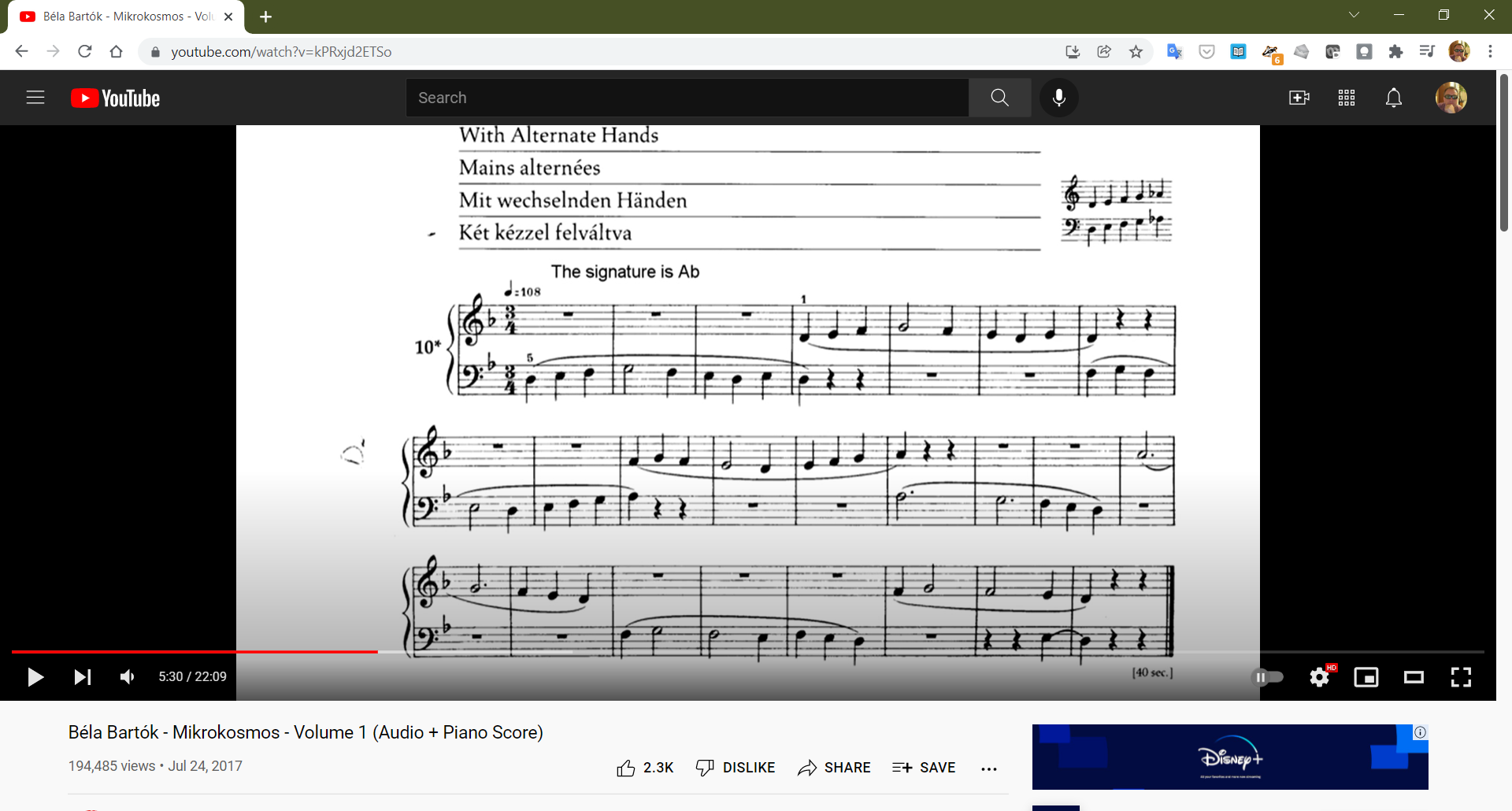 First of all, identify the tonality of the piece or passage. I think there is at least one good Q & A here to help with that. I note that the piece concludes on D so I'll guess that it's "key" is D something-or-other.

It has a nonstandard signature with only A♭.

Next go to Ian Ring's Amazing Scale Finder and select the notes corresponding to the signature: 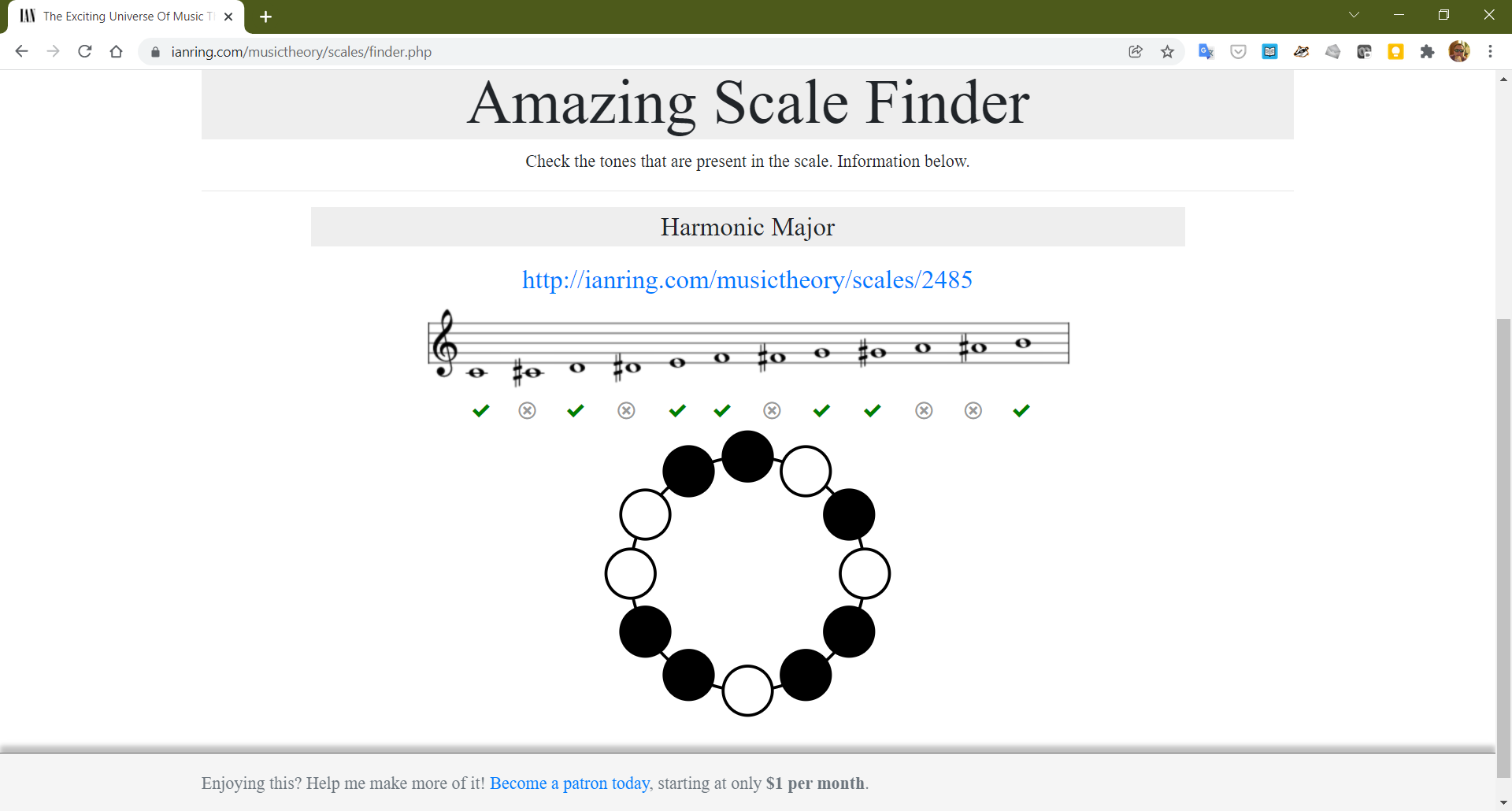 (Never mind that it displays both G and G♯ with no A of any kind. We just want the right set of pitch classes, spelling it only with sharps.)

It says "Harmonic Major", but we're not done!

Click on the link to scale 2485 and scroll down to where it has Modes.

Remember that it's considered "Harmonic Major" when we start at C. We're starting on D, the second pitch. The second mode of the Harmonic Major is Dorian ♭5.

So what you have for this piece is D Dorian ♭5.

If you want to read about Dorian ♭5, click the link to scale 1645. It will display C Dorian ♭5 but the properties of the scale still hold. Maybe one day the Scale Finder will be updated to include a way to designate the tonic.

You'll also note that in the description of the Dorian ♭5 scale, there is a list of names for it from other traditions and naming systems.

There's another way to do this by transposing before entering the notes into the finder. I'll leave it to the reader to work that out.

Key signatures can help indicate "the key," that is, the tonality of an area of music. (I hedge by saying "can help," because they don't tell us everything. They don't tell us the mode—one F# could be G major or E minor, or for that matter, perfectly serviceable for Mixolydian mode on D, or many other modes. And a piece might modulate for some time without bothering to change the key signature; we might analyze that passage as being in the new key even if the notation doesn't show it.)

To answer your core question: There may or may not be names for the tonalities that Bartok was representing with the "weird" key signatures in Mikrokosmos, but that doesn't technically make them "a name for a key signature" so much as "a name for a tonality[/mode/scale]." For example, you might want to write in the Hungarian minor scale, and use an F#, an Eb, and an Ab as a key signature. In this case, to be perfectly pedantic, "Hungarian minor scale" would not be the name of this non-standard key signature, but of the scale that you're trying to represent.

And also, as far as I'm aware, Bartok's example is very much an outlier; there are many, many pieces in modalities other than our familiar major and minor, but they typically just use accidentals as necessary to modify "standard" key signatures.

Part of the problem will be in the naming and various musical traditions.

For example, there is a scale called variously Freygish, Ahava Rabbah, phrygian dominant, etc. etc. Which name is supposed to be the name.

But I think there is another practical problem when specifically asking for key signatures.

If you do the same, but account for only the seven diatonic modes, it becomes 12 * 7 or 84! Now add in additional modes from jazz theory only using each mode of the harmonic and melodic minor scale, that an additional 7 + 7 modes. 12 tonics * 21 modes is 252 key signatures!

Of course you can make a list of all those and index with all the various duplicate names, but it would become an impractical list.

One reason the circle of fifths charts of the major/minor key signatures are common is because the number of items shown is relatively small, so the visual format works. But, if you try making a chart of 200+ items, chances are it will be a mess!

The more practical way to do this is not list all key signatures but just list a reference scale for each mode, with each one starting on the same tonic. That will show you the interval structure of the scale, and from that you can transpose and create a key signature if you want.

That is what the wiki page modes of the heptatonic scale and the key signature system does. It just lists reference scales of a single tonic of C. It it were a list of key signatures for all those different modes, it would be 12 times as big!

Based on all the comments on the various posts and comments I really think the OP is not asking about key signatures, but really is just looking for a exhaustive scale reference. There are lots of such pages online, or you can just search for scales in Wikipedia. People seem to love making those lists.

But, it might be helpful to at least point out a naming convention that appears in jazz. Lots of scales get names in jazz theory based on diatonic modes - as based on tonic C - plus modifiers to scale degrees. So, for example, the second mode of harmonic minor, some docs call it "locrian ♮6", because it has the same intervals as the locrian mode, but with the sixth degree raised.

Wikipedia even list the "name of scale" for the second mode of the double harmonic scale as "lydian ♯2 ♯6" with absolutely no citation to an actual example of music with a tonic and mode to support the idea. Basically, these kinds of docs just "name" all modes of any scale regardless is there is a real musical tradition using these purported scales.

If the question is what to call a weird scale, try using that process to find a descriptive name.

29
How many (major and minor) keys are there? Why?
5
Strange key signature?
3
Piano Accidentals and Key Signatures
6
Is there a key signature for harmonic minor scale?
2
How can a scale sound sadder/darker than the scale with the same key signature?
2
Sight reading piano pieces with sharp or flat key signatures using intervals
5
Key signatures with Quarter Tones
10
Confusing clarinet key signature changes
0
The Grand Staff Revealed?