Melodic minor: Does 6 get raised when descending and then ascending immediately?

I found this embellished suspension in C minor: 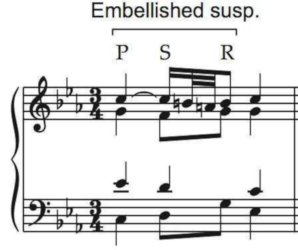 A test in A minor:

It looks weird that the leading tone is raised so early – in the descent...

There is nothing weird about it. This passage is totally normal.

More that the direction of the line, the prevailing harmony is what determines the raised or lowered tones. This passage the B and A are part of a dominant chord. The B natural is the raised form of the seventh degree to form a proper dominant with a leading tone. The A is raised so the neighbor motion with B is a whole step rather than an augmented second.

The largeness of an augmented second is considered awkward in some contexts, like a neighbor motion, in other contexts it isn't a problem. You can find plenty a descending harmonic minor scales with the augmented second, over dominant chords. Suffice to say it isn't a matter of simply direction, it's a matter of the harmony and the overall line.

This kind of neighbor motion is the perfect example to illustrate why direction is not the primary issue regarding the sixth and seventh degrees in minor. Such neighbor motions are simultaneously both ascending and descending. In the example passage the A occurs only once! There is no way to apply the mistaken ascending/descending rule. How could you apply a lowered sixth for the descent and a raised sixth for the ascent when there is only one sixth played? You can't, and the raised/lowered treatment is decided by factors other than direction.

Although the pitches initially move downward, this isn't a descending scale in the sense of a melodic passage. That is, the idea behind melodic minor of creating smooth passages applies to melodies but not to ornaments, which are considered "extra" and not part of the melody itself.

Instead, there are two ways to consider this:

This is just the clausula i-ii-V-i. The lead tone B is advanced already above ii and A (6) is just a changing tone, and not a descending scale (agreeing with Aaron.)

Not the answer you're looking for? Browse other questions tagged scales melody accidentals or ask your own question.