When playing an artificial harmonic, does it matter where the stopping finger is placed? Leaving tone quality aside, will the same pitch class be produced regardless the stopping location?

I performed some tests and saw that it seems to be a function of the frequencies that would have been generated in the two points in isolation so there is some interplay.

When playing an artificial harmonic, does it matter where the stopping finger is placed?

Absolutely. Artificial harmonics are natural harmonics that simply use a string that has been shortened by stopping it "artificially," so if you move the stopping finger, you alter the length of the string and the placement of all its harmonic nodes.

There's a fun "special effect," most effective on cello or bass, in which you play an artificial harmonic, high on the fingerboard, then glissando both fingers downward without adjusting their width as one normally would have to do to preserve an interval of a third. As the fingers slide, they mostly produce a "static-y" shriek of descending, fairly diffuse pitch, but along the way they pass through spots in which they describe other harmonic relationships, which ring out, and the resulting effect suggests a seagull's cry.

This effect basically relies on continuously changing "where the stopping finger is placed," and the fact that only a few spots on that continuum produce harmonics.

* This "counting from the nut" business can be confusing and misleading; I just use it to keep the frame of reference constant. A stopped string "doesn't care" how much string there is behind the stopping finger as long as it doesn't vibrate. If you count "from the stopping finger," then you find harmonics not at set distances but at set proportions, ratios of the string length.

The relative distance along the string from the fretted note to the harmonic note is everything - there are many places where you will get an artificial harmonic. The loudest, and simplest to do are 5th, 7th and 12th fret higher (as well as 12 frets higher than those if you have enough frets), but you will also get one just off the 3rd fret, one around the 9th etc., especially if you use an electric guitar and distortion.

I see you have mentioned various string instruments, but then focus on violin - well, the same holds true for violin, however without frets you just need to focus on distances, and generally when bowing with the right hand you will need to use your left hand to both finger the note and to touch the harmonic node you want - which may limit which harmonics you can reach.

Artificial harmonic is where you fret a note and then play a harmonic with your picking hand 7 or 12 frets higher on the same string. It matters very much where you pick the harmonic. It will only work at very specific places in regards to what note you fret.

This is mainly done in the classical scene where you keep your index finger straight and pick the harmonic with your ring finger. I have also debeloped a way to do it with a pick.

You keep your index finger straight and hold the pick with your middle finger and thumb. This opens up a whole new dimension of harmonics.

The natural harmonics are those that fall natural on the fretboard. Mostly at fret 7 and 12 but on some guitars on fret 5 as well.

You get pinch harmonics or squelies that are made by picking a note and then touching right after you play it on one of the nodes on your guitar.

Lastly, you also get tap harmonics as made popular by Eddy Van Halen. This is a variation on a artificial harmonic. The main difference being you tap the harmonic with your index finger instead of picking it. Something which gives a different sound.

NOTE: I have only verified this for three artificial harmonics and one double artificial harmonic where I used three fingers. So it might be bogus. But this is the kind of answer I wanted so I will write it down here anyway. Here is an example from a recording I did today: 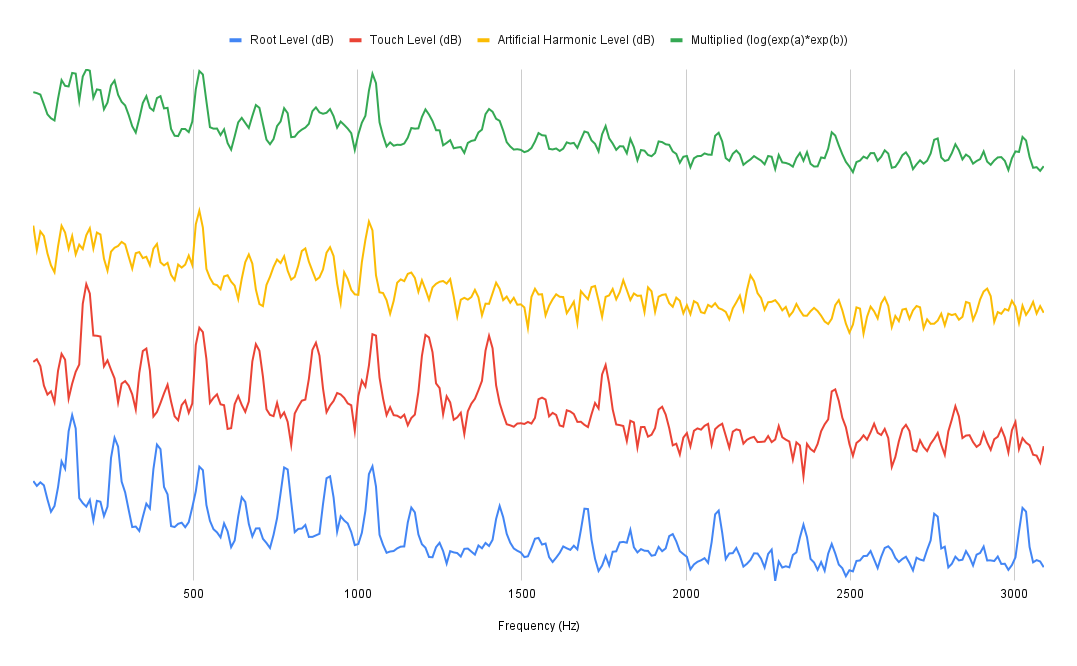 11
Sounds of harmonics
9
What's the difference between artificial and natural harmonics?