After reviewing this image: 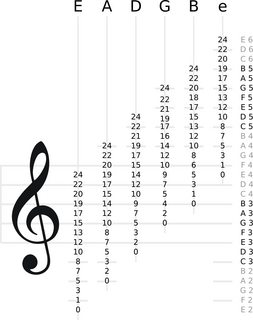 I've noticed guitars can play the exact same pitches on different strings and frets. How can I determine correct strings and fingerings? For example, if I want to produce an A2 in International Pitch Notation, I can choose either the big E string 5th fret or A string open.

Is there a methodology or guideline that can help me make these decisions algorithmically?

'Correct' is hardly the word to use. 'Appropriate' might be more apposite.

True, on guitar (and other strings like violin, etc.) particular notes can have several places to be played at.

The sound will be one criterion. There's a big difference between A 6th string 5th fret and A open 5th, The latter is often brighter, whilst the former can have vib. added.

Position is another. That open A could carry on sounding while some other notes get played higher up the neck - a common guitar 'trick' - while trying to hold it at 5th fret at the same time is impossible.

Whatever position one's at on the neck is a contributory factor - top E open can also be on 2nd string 5th fret, but neither would work well if the preceding and following notes were around fret 10. Then, 3rd string 9th fret woud be a better bet. As part of warm-up, I sometimes get students to play that note in at least 6 different places - think about it!

There can be no one best place for any particular note, except in one circumstance. That might be the case with harmonics, but that's a different story. So, no particular algorithm - there are other factors that come in to play, so to speak.

If you don't know anything about playing guitar, you will have to learn. Buy a book, buy a guitar, take lessons, learn to play. That's what software makers do. If they have an application domain, say, ship-building or agricultural management, the first thing they do is, learn about that domain. Writing software for an application domain you know nothing about will be difficult and produce bad software. "Guitar software written by a non-guitarist" means the same as "utter rubbish."

If you just want to denote one single pitch and not an entire piece, then you could make an arbitrary technical decision, for example to select the lowest possible fret on any string to get the needed pitch.

If you want the algorithm to make guitar-oriented decisions, you'll have to consider things about finger stretches and how often you need to move the hand to a different position.

If you have a whole piece, lots of notes, it might be impossible to play the notes on the guitar at all, and you'll have to make a reduction or arrangement of some sort.

However, if you want to see how existing algorithms handle the problem, you could look at something like MusicLab RealGuitar. It takes realtime MIDI input and attempts to somehow place the notes on a guitar fretboard. And it has guitar-oriented controls like "prefer this position". https://www.musiclab.com/products/realguitar/info.html

Is there a methodology or guideline that can help me make these decisions algorithmically?

but if you want G₄ to sound simultaneously, perhaps it's better to play:

It would be require even less fretting hand stretch to play:

as the interval between G and B strings is only a major third, and because the distances between the higher frets are smaller.

In the works of good composers you will often find examples of efficient use of the instrument characteristics, and making what would seem a limitation to aid the artistic expression.

Some guitarists prefer to finger it in a more conventional way:

22
Poor quality guitars that don't tune
7
Help me to find a way not to bar A-shape guitar chords with my ring finger
5
Floyd Rose string tension and action question
3
do older ears with diminished hearing have a problem distinguishing intonation on guitar strings
4
Cause of G string on Ibanez JEM sounding dead?
0
Is my guitar neck too thick for me?
6
Electric guitar is making a vibrating noise on hammer on
6
Are these indentations on the frets of my Acoustic for intonation? Can I apply this to the frets of my Electric?